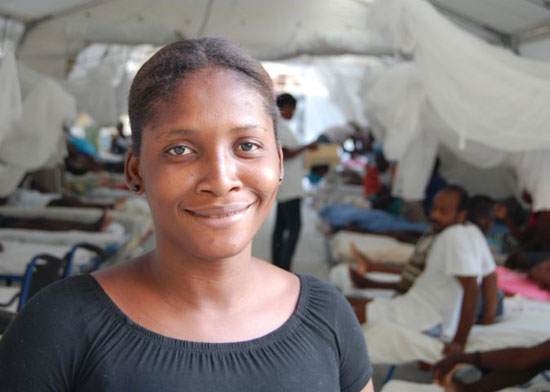 Like thousands of Haitians, Geraldine Augustin started helping people straight after the earthquake. She is a young, passionate and energetic medical student who has just joined MSF, working in an post-operative care centre set in what used to be a girls school. She is one of almost 1,500 Haitian staff employed by MSF who make medical activities possible. Here, she tells us about her life and work after the earthquake...

I am Geraldine Augustin and I am finishing my medical studies. On the 12th January I was heading to University for a class. Suddenly the earth started to shake and the next second all the houses were under the earth, there were dead and injured people everywhere. I was lucky enough not to get hurt, but my mother was killed.

As it was the first time Haiti experienced something like that, nobody understood what was going on.

The day after the earthquake, although I was still crying for my mum’s death, I took all the drugs I had, found someone who had a car and went to treat people who needed help. There were many wounded everywhere. I treated, treated… I treated so many people. Then I came across MSF and they told me I could refer the most critical patients to them. That was our first contact.

Since MSF and I were doing the same thing, I thought we might as well do it together. So I joined about two weeks after the disaster to help the victims of the earthquake. I am Haitian and I want to help my fellow citizens. As I haven’t graduated as a doctor yet, I am working as a nurse. I do all sorts of things and try to help where I’m needed. I see patients who have suffered so much and most have a huge psychological trauma.

With MSF we work every single day, non-stop. We do all we can to save a life, to help a patient, to help all those who need help. There were many injured, people who had to be amputated or who are now psychologically unstable. They have found adequate care at MSF.

It’s very difficult for me because I lost my mum in the disaster and I don’t have a house anymore. We now live in the open air and we’re trying to adapt to the situation, but I don’t think we ever will. It’s hard for everyone! Everybody lost people around them, people are not used to this kind of situation. It’s hard, it’s hard for everyone. Nobody will ever forget Tuesday 12th January 2010.

All the nurses and all the staff who work here, they are all victims of the earthquake. They are professionals and looking for places where we they can take care of affected people, but they live in horrendous conditions.

I live on a small plot and for the moment I don’t have a tent, I live outdoors. There are still dead bodies under the rubble, there are no toilets so it really stinks. Drinking water is also an issue but now MSF is delivering water in our area so it’s getting better. I work night shifts, so I need to sleep during the day. But it’s really hard with the sun and at night, when it rains, it’s also tough.

Patients in this hospital are on their guard all the time, they think another earthquake can still happen. They wonder if they are going to die, if they still have a future. Even under the hospital tents, people ask us if they would fall in the event of an earthquake. And I tell them that “of course they will hold”.

The Haitian staff are very important in this project. Like the patients we are victims of the earthquake so we can understand how they feel. Because we come from the same culture and speak the same language as the patients we can help identify what is wrong with them. We are close to them.

I don’t know if I’ll be able to go back to medical school. First of all my university collapsed so I don’t know what’s going to happen there. Also, it was my mother who was paying for my school fees. And now that she’s dead I won’t be able to afford it. I will try to find a grant so I can continue. Becoming a doctor and saving lives is my dream.

Whatever happens, I will continue working in mobile clinics in the provinces to help people as I have done in the past. It is that same humanity that has helped me do what I did just after the quake. Many people know I have an important job and I feel I have a responsibility. When MSF came it felt a bit like they came to help me with my task. If MSF did not exist, I would have created it myself.