Giving birth on the move: A Somali midwife working to tackle maternal deaths among nomad women

It’s a Friday morning and the first rains of the season have arrived in Wardher town in Ethiopia’s Somali region. Delighted by the freshness in the air after months of dry, dusty heat, midwife Hamdi and her colleagues pack boxes of medical equipment and drugs into two MSF vehicles. Hamdi’s mobile clinic team is about to leave for one of the many isolated villages in Doolo Zone, a remote region bordering Somalia. 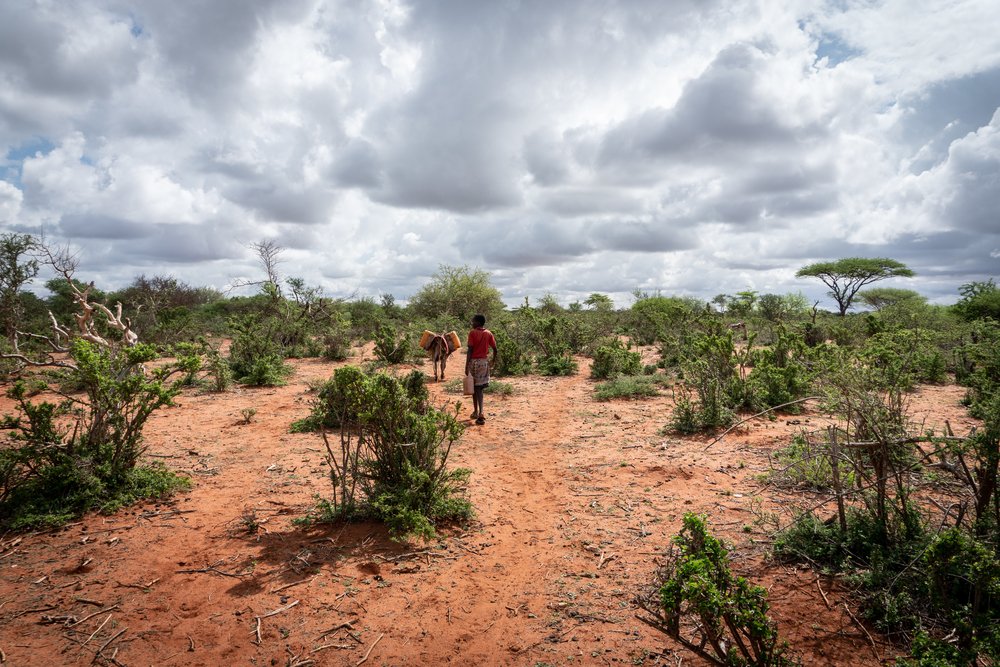 Hamdi is one of four MSF midwives working to tackle maternal deaths among a mostly pastoralist and nomadic population. Aged 23, she is Somali herself and is passionate about her work. Five days a week, she heads to one of 16 locations where MSF provides basic healthcare in a vast area with no paved roads and hardly any health centres. 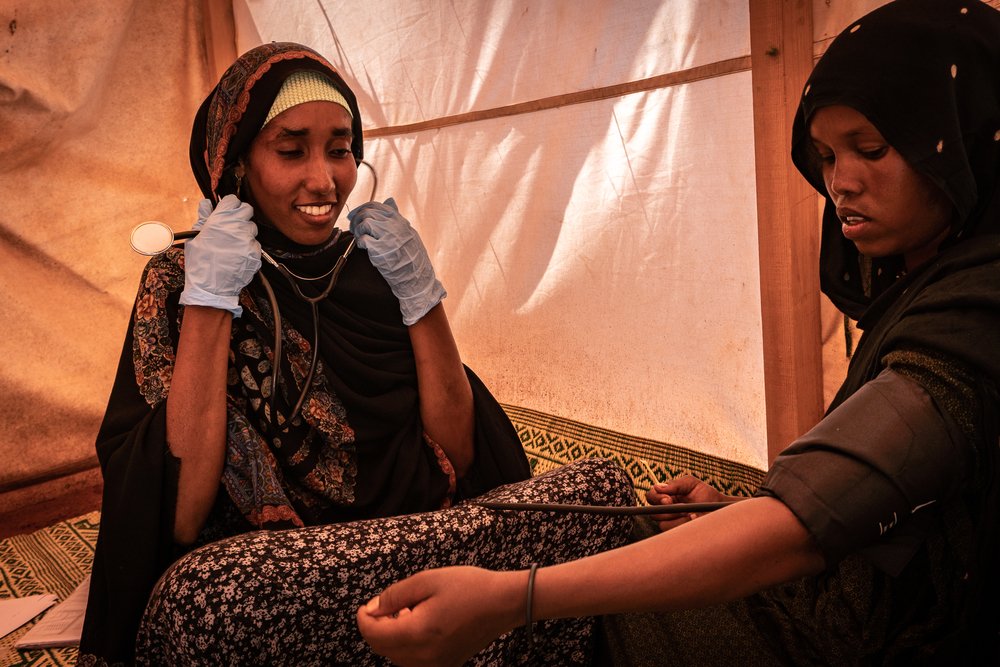 Two hours later, the team arrive at Hogdugaag village, which has about 1,000 residents, including a number of nomadic families staying in the area. Soon 15 women, some pregnant, some with babies or young children wrapped in colourful bundles on their backs, wait in the shadow of the simple wooden structure which serves as MSF’s mobile maternity ward. 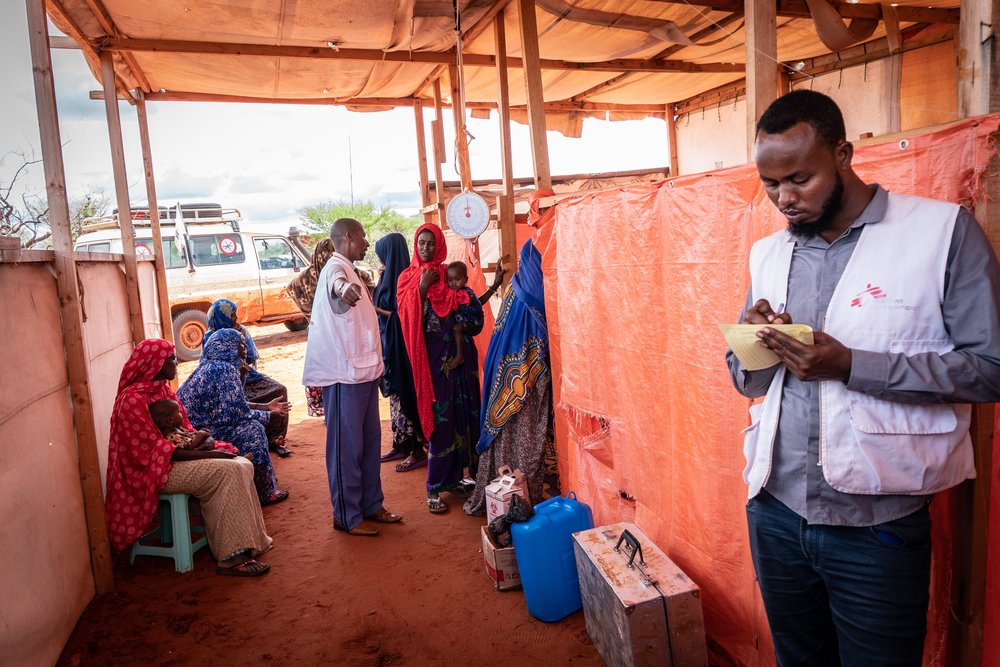 Hamdi’s first patient today is Faadumo, aged 20, who gave birth to a baby girl 20 days ago. Often the distances that women from nomadic families have to walk, combined with local traditions, prevent them from coming for postnatal check-ups for some time after having given birth. Fortunately for Faadumo, her family has settled just an hour away from Hogdugaag village. Some of Hamdi’s later patients have walked for up to four and a half hours to get here. 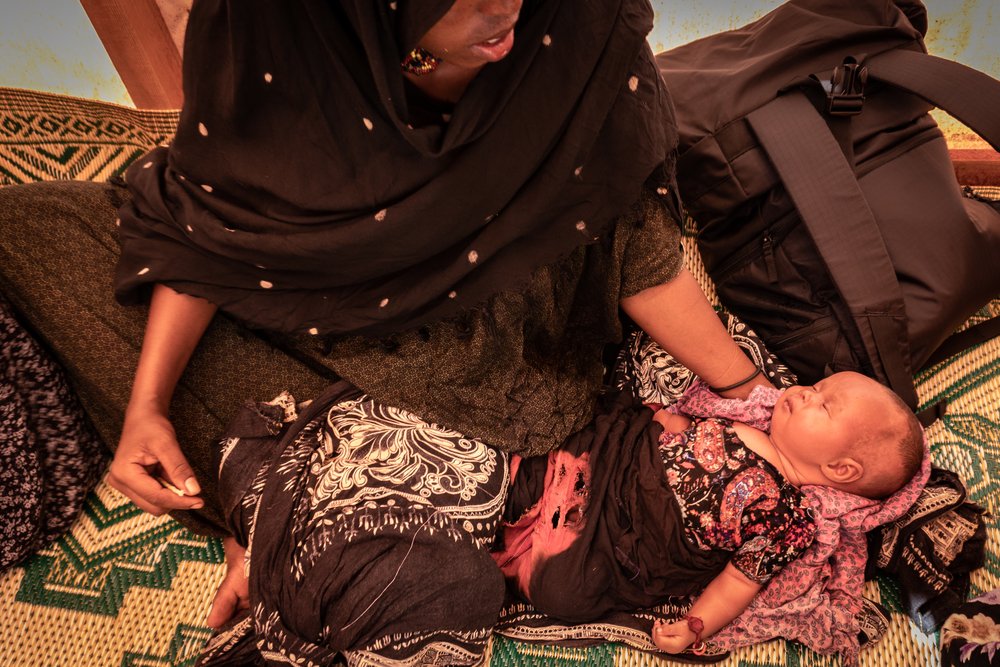 Hamdi checks the mother’s health and gives the baby girl vitamin K. “I gave birth with the assistance of an older woman in my family,” says Faadumo. “This is my second child. She doesn’t have a name yet.” 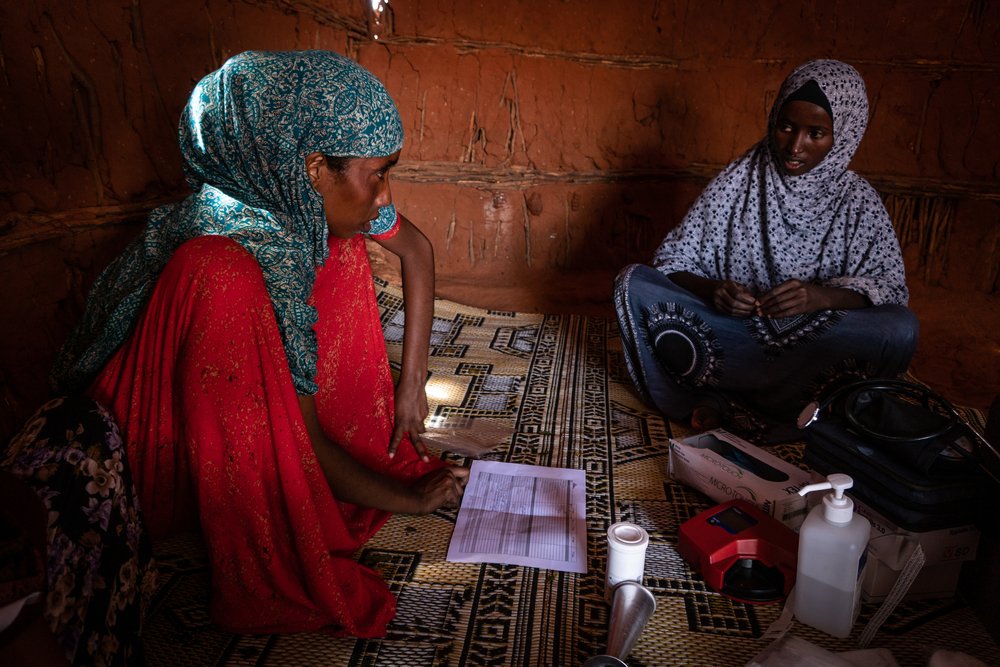 Susanne Doettling/MSF
20-year-old Aamina Jama Omar is from the village, and comes for a check-up in the first trimester of her pregnancy.

Next Hamdi sees 20-year-old Aamina, three months pregnant and suffering from dehydration as a result of severe morning sickness, and persuades her to be referred to Wardher hospital for IV rehydration. 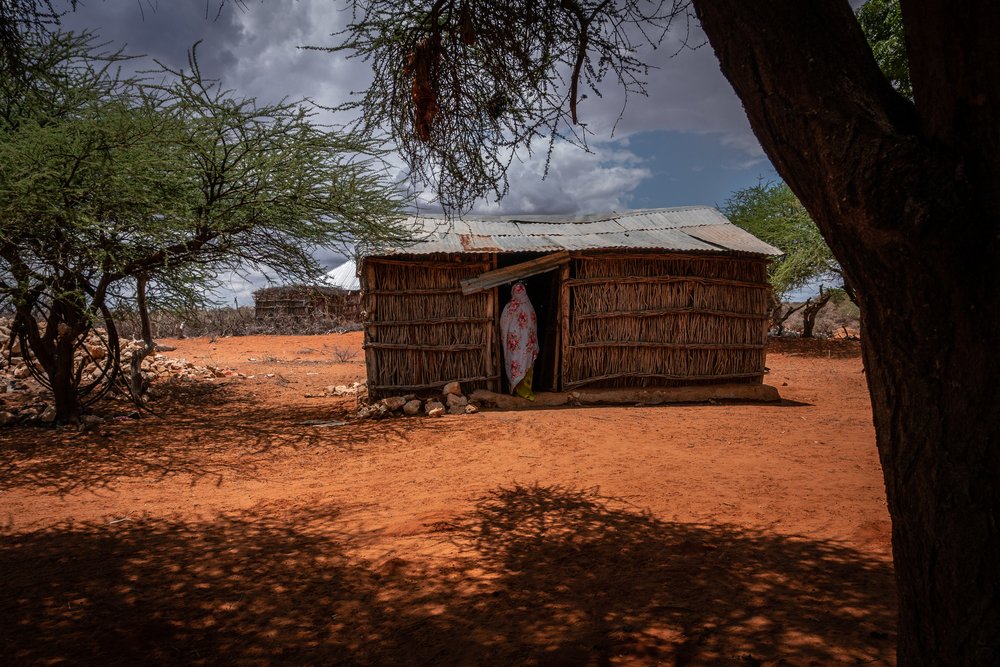 Then a young woman is led in by her worried mother. A month ago, she gave birth to a stillborn baby after a prolonged labour in the bush, assisted only by her mother. It was her first pregnancy. Scars on both her wrists suggest she has tried to harm herself in grief over the loss.

“Too often I see women who have lost a child during prolonged labour,” says Hamdi later. “With no trained birth attendants nearby to act when there are complications, and far from good emergency healthcare, it happens too often.”

Having a baby in this part of Somali region can be risky, particularly for women experiencing complications, as emergency medical care can be hard to reach. Wardher hospital, the only referral hospital in Doolo Zone for a population of about 300,000, is simply too far away for many women living in remote communities.

“Somali women tend to have five to 10 children – having many children is our ideal,” says Hamdi. “Most families have experienced the loss of a child, either during delivery or in the first years of a child’s life. It is part of our culture to give birth at home, and when they need emergency medical care, it is often too late to get them to the hospital. ”

Ethiopia’s Somali region has the lowest percentage of births in the country delivered either at home by a skilled practitioner (26%) or in a health facility (23%).

The team of MSF midwives work hard to minimise the risks associated with childbirth for women and their babies. “We try our best to prevent complications and to explain risks and early signs of difficulties during labour,” says Hamdi. “We also try and convince a woman at risk to go to the hospital. But many pregnant women do not come for early pregnancy check-ups or for postnatal checks.” 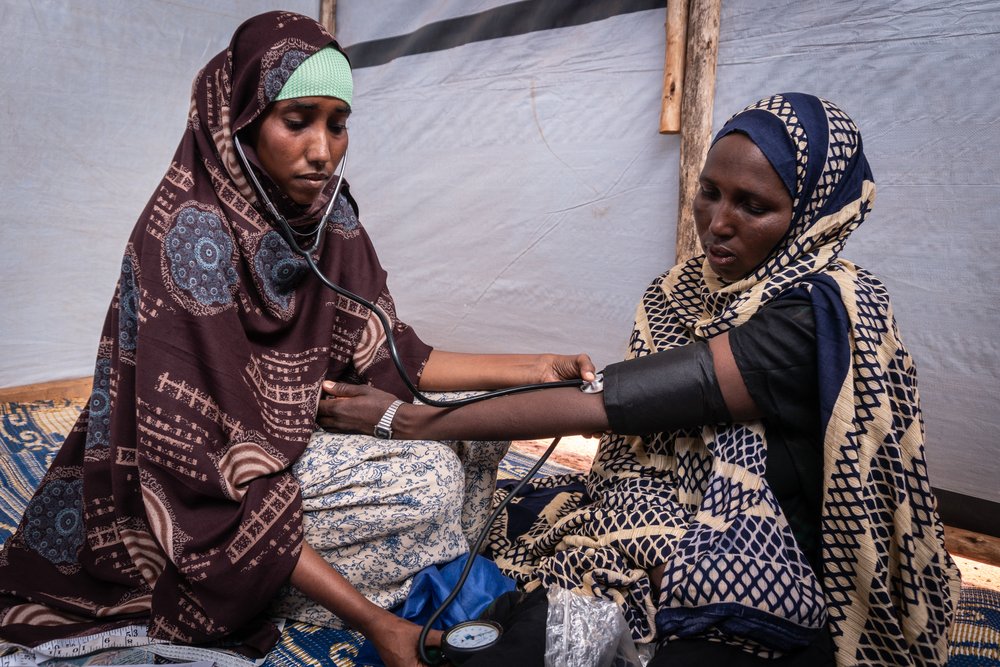 Sahra, who is seven months pregnant with her seventh child, currently lives with her family 20 km from the village of Mirdonbas, where MSF runs another weekly mobile clinic. Hamdi checks the position and size of the baby; it is growing well and all appears normal. She also checks Sahra’s blood pressure and haemoglobin level and checks her for malnutrition. Anaemia and malnutrition are common among pregnant nomadic women, but Sahra is healthy and her test results are good. 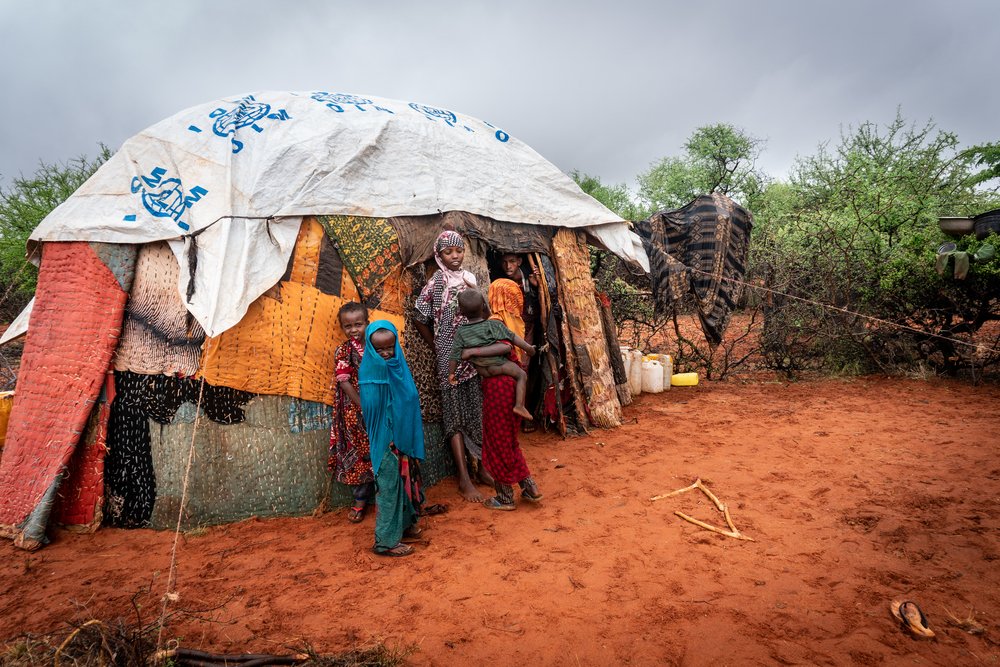 Susanne Doettling/MSF
At a Bush community 18 km from Hogdugaag village, it is green and continues to rain heavily, two families live together - 18 people altogether - and tend to their 200 goats.

Nomadic life is hard. Being constantly on the move, chasing unreliable water and food sources, take its toll, especially on pregnant women, mothers and young children.

“Our life means we are moving all the time,” says Sahra, “especially now, in the rainy season, when we walk for hours to find the best pasture. It’s hard, especially on women. When I’m pregnant like I am now, after an hour of walking, I’m really tired. I want to rest but it’s impossible.”

Sahra gave birth to all her children either at home or on the move, but says she came to MSF for antenatal and postnatal care whenever possible, when she was not too far away. “Luckily I am fine today,” she says. “If I experience any complications, I know I should go to Wardher hospital. But we don’t always have a network to call for an ambulance and they don’t have many vehicles.” 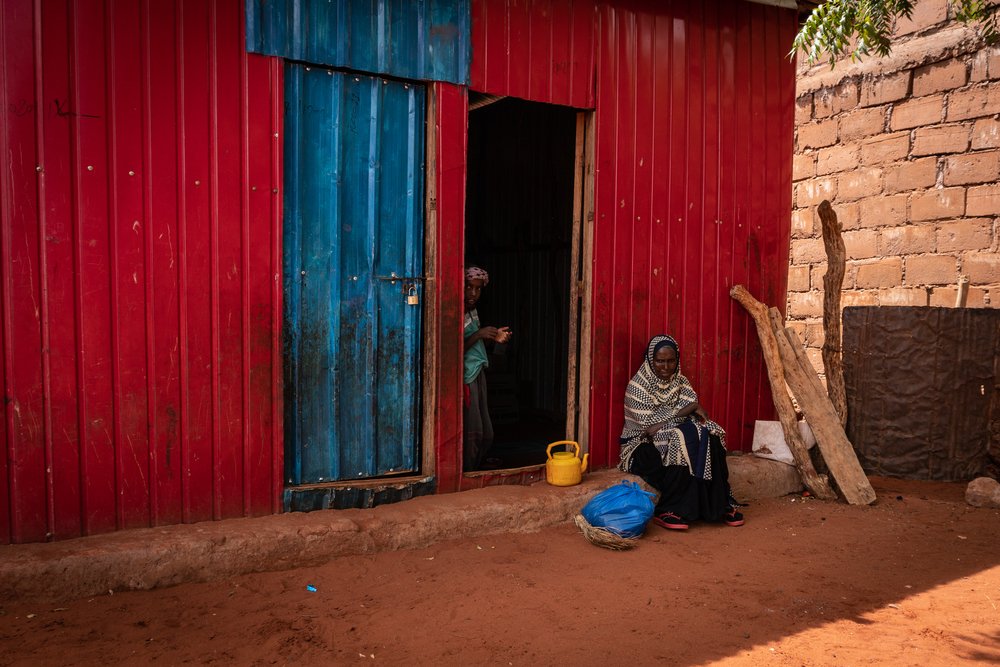 Sahra leaves with her little son to buy tea, sugar and soap before returning to her family in the bush. Before leaving, she says: “I’d prefer to live another kind of life, if we had the means to settle. Last year’s rains were so unreliable and the last big drought killed many of our animals. We are so dependent on rain and pasture. The animals are our survival. We are always worrying about water: about water shortages or now about unclean water. Thank God, so far my family has been lucky and my children haven’t got sick from diarrhoea or other diseases. My children are my pride. I see them continuing our lives in the bush, but hopefully with many healthy animals to provide for us and for them.”

For MSF’s midwives, checking up on each and every pregnant woman living in and moving around this vast area is an impossible task. MSF is tackling this challenge by teaching women, their husbands and others in the community to identify complications during pregnancy or childbirth and act fast, as such early detection can be lifesaving. 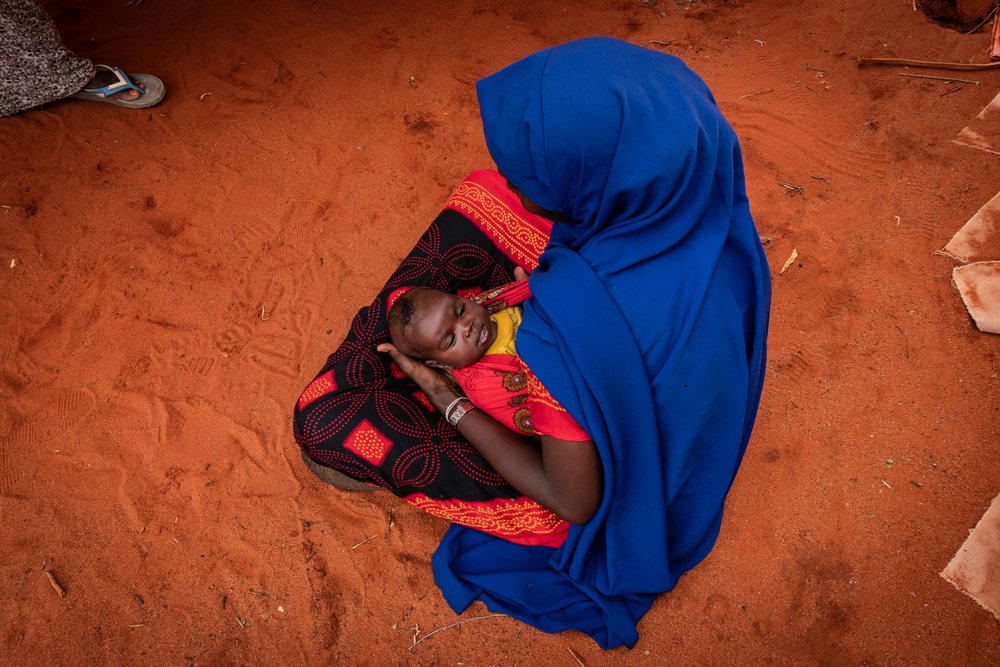 Today’s clinic is coming to a close. The team are tired, but satisfied at having been able to help so many women and their babies. “This is why I wanted to become a midwife, to be there for our mothers and make sure they stay healthy and have healthy babies,” says Hamdi.