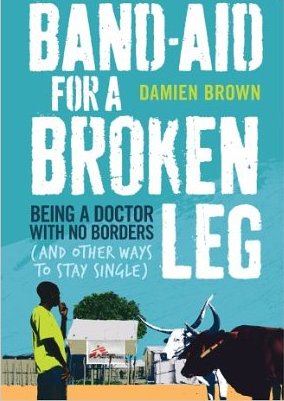 This review by Manchán Magan appeared in The Irish Times

A big thank you to everyone who entered the competition. Winners will receive their books by post shortly!

While Ireland’s missionaries and aid volunteers have played a disproportionate role in ministering to Africa’s poorest, few travel memoirs have been written about the experience that aren’t pious, judgmental or self-serving.

Band-aid For a Broken Leg, by young Australian doctor Damien Brown, is a model of good practise. It’s a searingly honest and gripping account of working in remote hospitals in Angola, Mozambique and South Sudan, told in short, episodic bursts with self-deprecating humour and powerful characterisation. There’s an element of ER to it, with shouts for saline drips from the operating table as blood haemorrhages to the floor. It’s ER Unplugged, however, without electricity, monitors, oxygen or x-rays.

Brown’s first posting is to a mud-hut outpost surrounded by landmines in war-ravaged Angola where the region’s healthcare is provided solely by a temporary Médecins sans Frontières (MSF) hospital in which he is the only doctor, with local clinicos, nurses and logisticians catering to 300 inpatients and 2,500 outpatients per month. The inevitable conflict arises on day one when the staff misinterpret Brown’s questions as criticism by yet another Western doctor dropping in for a few months and thinking he knows best. He is disarmingly frank about his unintentional arrogance and the staff’s indulgence of him.

There are riveting accounts of landmine explosions, leopard attacks and sexual intrigue. These provide vicarious adrenalin surges that are then justified by the analysis and insights into the complexities of humanitarian aid. He questions “what impetus there is for any of these governments to staff their own hospitals properly… when they know well that we’ll simply rush back at the drop of a hat, with no strings attached.”

Lines such as “He opens the patient’s belly with a midline incision, then… we each grab a side of the wound and pull,” work because within a few well-wrought lines and canny observations Brown makes us care about the patient and the old surgical clinico performing the operation – a war veteran with no formal medical training, but plenty of hands-on experience of mangled bodies in a military hospital during Angola’s civil war.

He writes amusingly about the perceived heroism and sexual allure of MSF doctors, but admits that his life and death interventions, though dramatic, are far less heroic than the work of local clinicos diagnosing and treating thousands of people each month for malaria, gastroenteritis or chest complaints. Even the hospital logisticians, who run the area’s water supply “save far more lives than we health workers ever have. And from what I’ve seen, this is the reality of medicine in developing countries: people die of preventable conditions that are easy to treat, or even prevent. Of the millions of children who won’t survive the year, most will succumb to one of six things: poor nutrition, pneumonia, diarrhoea, malaria, measles, or a lack of basic neonatal and maternal health care … None of it is rocket science – or expensive.”

It’s the type of message every former aid worker wishes to convey, but to do so within the context of a gripping travelogue with funny anecdotes about expat shenanigans, finely-wrought observational phrases and the ability to summon genuine characters from the hordes coming through the hospital takes skill.

The most startling passages are those about practising in Melbourne and the bewildering amount of lab reports, nurses’ charts and medication lists for each patient, not to mention monitors, drips, catheters and chest drains. All aimed at giving “another lease of life at eighty-two years of age”.

Brown questions the Western practise of hanging “on to patients for weeks, months if necessary, scanning, medicating, operating, dialysing, weaning, intubating, haemo-filtering, catheterising, transfusing and referring them.” It’s what he’d want for his own family, and though the disparity is stark, he understands that “such comparisons are futile. Naïve at best, self-righteous at worst. Nothing more annoying that the person at the dinner table who notes how many kids could have been vaccinated in lieu of your latte.”

He returns to Africa with MSF whose integrity and concept of témoignage – of bearing witness, or speaking out – he admires, as well as their commitment to working in dangerous areas. As he writes, “a cursory browse of their public website doesn’t downplay [the] risks. Statements caution that volunteers have been raped, kidnapped and murdered in the past.”

And, indeed, hours before his arrival at a Somalia feeding station, the compound suffers a targeted attack with three MSF workers murdered. He gets redirected to Mozambique and from there to South Sudan where he faces a regular stream of tribal herdsmen shot during cattle raids on neighbouring clans. “Life is so precious here; that these people battle to coax an existence from this severe land, to raise their kids, to carry a sick relative for days to a hospital and then sit by their side for weeks; yet life is equally cheap. Disregarded during a cattle raid, valued secondary to a clan’s honour and constantly threatened by these armed men.”

To have such great stories entwined with robust insight into humanitarian aid makes this, for me, the travel book of the year. His accounts of the cost of chartering planes to transfer bullet-wounded herdsmen or to keep rival clan members apart is horrifying; money which could be spent on educating people about nutrition, hygiene, HIV protection, family planning. “We could train health workers, put them through a full-time course so the hospital doesn’t rely so heavily, and so unsustainably, on expat staff.”

Travel writing can be a solipsistic and self-important genre, yet Band-aid for a Broken Leg shows its true potential. Though Brown is critical of himself and aid in general, his quiet heroism and that of MSF shine from every page. It is a remarkably funny and warm book that will make the Afrophile fall in love with Africa all over again.