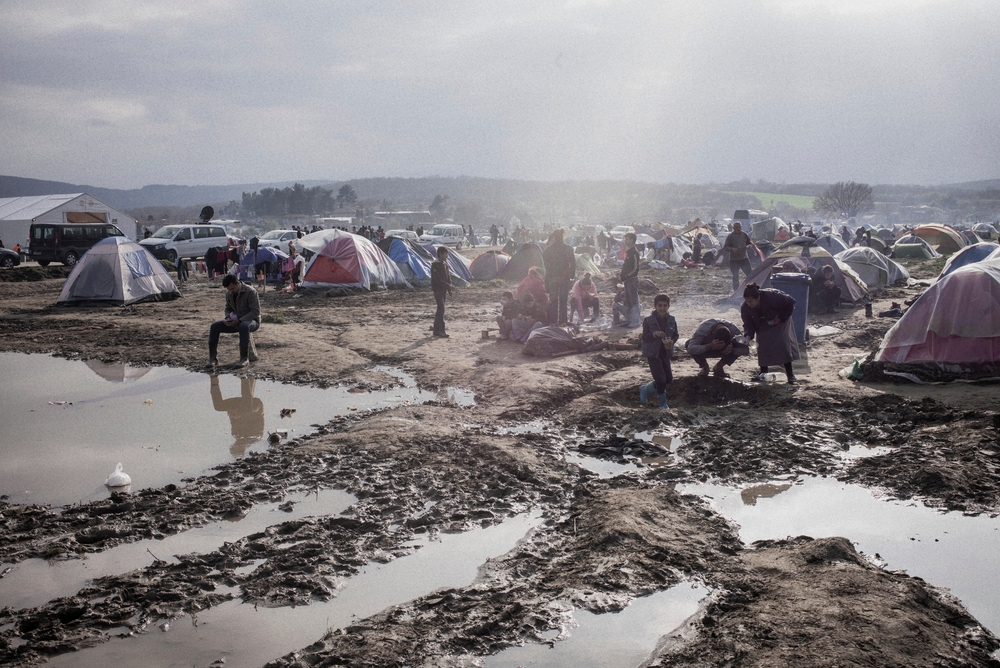 More than a month after the signing of the EU-Turkey deal, Médecins Sans Frontières (MSF) teams are reporting that the situation across Greece remains chaotic and inhumane.

In improvised camps and detention centres across the country, around 50,000 people are stranded in appalling conditions. In what is becoming unbearable heat, many are unable to access the asylum system and are rapidly losing hope that they will be able to join their relatives or find a place to live in peace.

Rocco Rorandelli/TerraProject
Egima from Afghanistan has her daughter Satayesh vaccinated by an MSF team at Idomeni camp.

In Idomeni, following the closure of the Balkans route to Europe, thousands are stranded and exposed to violence from the border police or smuggler and that erupts within the camp. MSF teams have treated babies as young as six weeks old for exposure to tear gas and children of ten for rubber-bullet wounds.

MSF teams are also dealing with the health consequences of long-term settlement in a camp which does not have adequate shelter, health or sanitation provision.

Teams are currently collaborating with national authorities to conduct an immunisation campaign that will protect children from vaccine preventable disease.

“Some of these children were born on European soil, others have been displaced for months, some for years, and most of them have not received all of the routine childhood vaccination that they need.” said Emmanuel Massart, field coordinator for MSF in Idomeni.

“Europe has decided to stop thousands of people from moving through Greece but did not properly plan to address their basic needs. This was a fully predictable crisis, caused by the deliberate neglect of European governments and institutions.”

Guillaume Binet/MYOP
Piraeus harbour. Since the beginning of March 2016, many countries on the 'Balkany road" have closed their borders, putting a stop to thousands of refugees' exile in Greece. More than 5,000 of them turned Athens harbour into a camp.

The situation is equally deplorable in Athens where in spite of the relief brought by volunteers and local charities, basic living conditions are not met. Helplessness and frustration add to the tension amongst refugees who feel that their cases are categorised arbitrarily according to their nationalities.

“Disputes between Syrians and Afghans break out every night” explains Mohammad, a Syrian refugee from Latakia who arrived at the port mid-March: “The decision to accept Syrians and Iraqis as refugees but not Afghans is not fair at all, because many Afghans’ suffering was even worse than the Syrians’ and that’s what makes Afghans angry with the Syrians,” said Mohammad.

In Elliniko camp there are around 4,000 refugees, mostly from Afghanistan, some of whom started a hunger strike two days ago in protest at the camp’s dire living conditions.

Police officers come to the Piraeus camp several times a day to persuade families to board buses and be taken to government-run camps until their papers come through. But many refuse, despite the risk of being evicted.

The conditions in the military-run camps frequently differs greatly from what was described to the refugees before they arrived. Near the Albanian border, in Ioannina city, the Katsikas military-run camp hosts 1,500 asylum seekers who spend their days in the heat and freeze at night.

They sleep in tents without mattresses and have nothing but sheets to act as a barrier between their bodies and the ground. A Greek army truck comes twice a day to distribute food and water. Despite the distribution of aid, many children have suffered multiple bout of diarrhoea.

“Maybe we are lucky because we are not stuck on the islands but we are not much better off than they are. We are also stuck here in this terrible place with no idea of how long we will live here and how we will survive,” said Khaled, a Yazidi man from Sinjar Mountains in Iraqi Kurdistan.

"We did not expect to live like this in Europe. We came here to seek safety after ISIS had killed us, kidnapped and raped our woman and exiled us. The whole world was watching our tragedy but no one did a thing to help my people!"

Guillaume Binet/MYOP
Detention facility on the Greek island of Samos

Detention facilities on the islands

Across the Greek islands, thousands of people, are detained behind layers of razor wire. Following the hasty implementation of the EU-Turkey deal, men, women and children are locked up without charge. Many have been held beyond the maximum 25 day period specified under Greek law.

“The hotspot centre in Samos is currently at four times its intended capacity, conditions are miserable and tension is at breaking point” said Julien Delozanne, Field Coordinator for MSF in Samos.

“Little information is provided to those who are imprisoned here. They are unable to see what the future holds for them. As far as we understand, unaccompanied minors and other vulnerable people are excluded from the EU-Turkey deal and will not be sent back to Turkey, but still they are detained.

"The mismanagement and poor planning Europe is demonstrating in Samos is beyond belief.”

Meanwhile on Lesbos, those who have been detained for more than 25 days are allowed to move about on the island but are left with virtually no assistance. Families and unaccompanied minors are separated from single adult males but many vulnerable cases slip through the cracks and conditions in the camps remain well below acceptable standards.

“European states and authorities have decided to make deterrence their only priority and give up on providing protection and assistance to these people – despite their moral and legal responsibility to do so.”

Keep up to date with MSF's work through Twitter