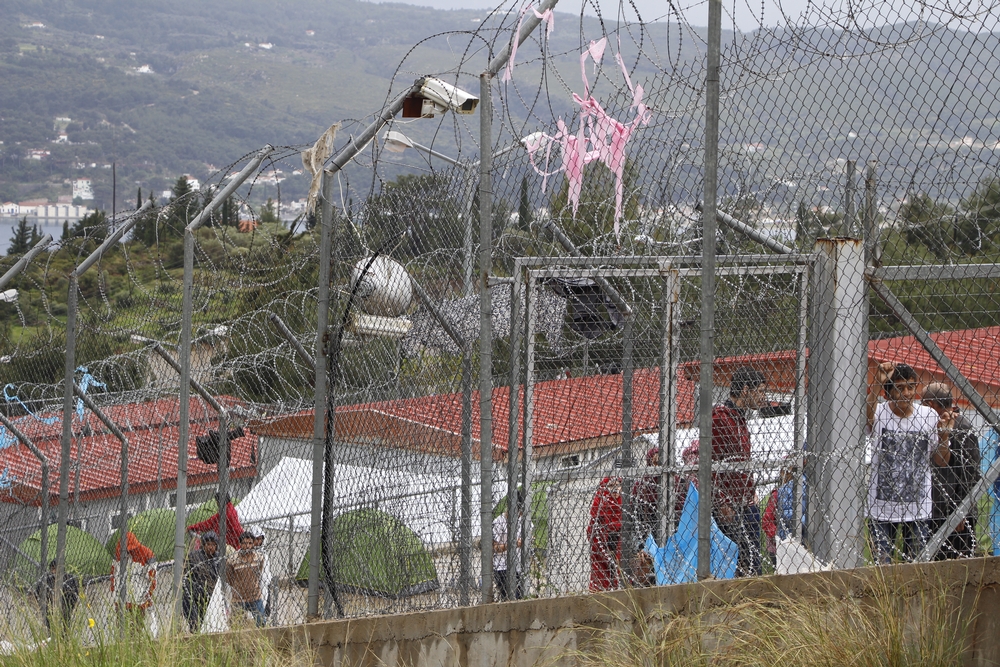 Greece: "As a doctor, I feel outraged"

Federica Zamatto is MSF's medical coordinator for migration programmes. Here he writes about the conditions faced by migrants and refugees in the detention centres on the Greek islands.

Everything has now changed on the Greek island of Lesbos which last year saw well over half a million refugees and migrants take their first steps on European soil. During the chaos of last summer, 15,000 people were stranded on the island after the authorities stopped running ferries to the mainland. Now everything is clean and tidy, ready for the upcoming tourist season.

The camps set up by volunteers and NGOs to provide temporary shelter to families arriving on the island are completely empty. The thousands of orange lifejackets that once lined the shores have been cleared away. The beaches are back to normal. But make no mistake: Lesbos is not quiet and tidy because people have stopped fleeing war. Instead, the men, women and children who risked everything on rubber boats are now detained behind fences, far from European eyes or on the other side of the coast, in a black hole.

Mohammad Ghannam/MSF
Khadija, 42, is a mother of four from Syria who is detained on Samos island, Greece, along with her children. She spoke to MSF from behind two metal fences.

Europe has decided to sweep migrants and asylum seekers under the carpet, like so much dust. The EU is attempting to hide the problem and put it out of sight.  But these are people, not dust. These are men of all ages as well as women and children who took a gamble on an uncertain route in order to leave behind conflict, instability and poverty, as the risks of the journey outweigh the constant threat they lived under in their countries of origin.

As the ink dried on the shameful EU/Turkey deal, the “hotspot” of Moria was transformed in a detention center. The organisation I work for, MSF, suspended all activities inside the centre after the conditions no longer existed in which to deliver impartial and independent humanitarian aid. It was a difficult and controversial choice.

A few days ago I visited the center and what I saw was shocking to me: children kept in detention, deprived of their childhood. Today, Moria is dangerously overcrowded and many people are sleeping in the open, with nothing more than plastic sheeting or cardboard for protection from the elements. I met a man desperately asking where he could find a sheltered place for his family to sleep. They had arrived the day before and spent one night already lying on the asphalt.

I met several people who said they had received no food. I met a mother looking for nappies for her child and having her requests refused time after time. I met a father with a heart condition and diabetes, he showed me the scar of a surgical intervention on his chest and ulcers on his leg. One of his children, around two years old, was affected by paralysis. The entire family had spent the night outside. No one was around to take care of them, nobody was trying to explain to them their rights or find them more decent accommodation. There were two people in wheelchairs, and an old woman slowly walking up the steep road inside the compound. There were young women and old men.

Hala fled #Syria to Jordan and survived crossing the Aegean. Now she's being held in a detention camp in Greece: pic.twitter.com/KJE4KrT26j

The most outrageous thing I saw however was many, many children kept in detention, left in miserable and indecent conditions, without proper food, education or even the chance to play, like children normally do. They were everywhere, running, sleeping, being pushed in their strollers. I could have never imagined that children, pregnant women, the elderly, most fleeing war, would have been fenced in by razor wire with the gates closed, on European soil. And I cannot find an acceptable explanation for why Europe is allowing this to happen.

Europe, that failed to implement the relocation scheme from the hotspots to European countries - showing that there was no real consensus on strategy from European member states, is now trying to hide the problem by casting away the refugees and subcontracting its responsibilities to Turkey. I’m afraid that European citizens do not know what kind of outrageous deal their states have signed in their behalf. If they knew, they would feel ashamed, sick, angry and betrayed, just like I do.

Read more about MSF's work in the migration crisis