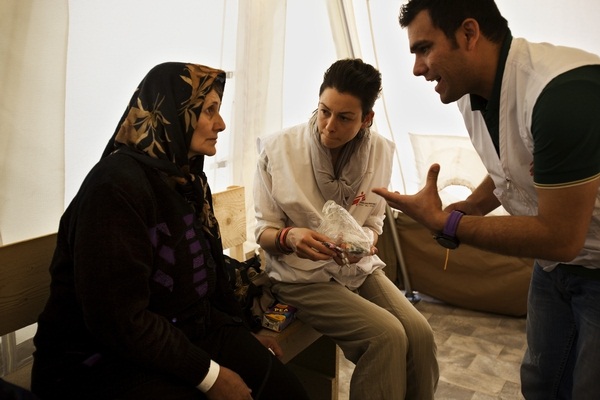 What problems did you encounter when you started working in the MSF project in the detention centers in northern Greece?

This intervention was, essentially, an obstacle run. Problems were part of our routine, so I’ll try to mention the most notable ones.

One of the first challenges had to do with the fact that most people were frustrated and angry, because they had just learnt that their detention was going to last 18 months and because they hadn’t been visited by any sort of healthcare personnel for quite a while. This caused a degree of disbelief and suspicion and, in the beginning, it was difficult to cooperate. Also, it must be noted that we are talking about victims of war, violence, torture, rape, human trafficking  and extreme poverty.

Frustrated migrants waiting for assistance in a detention centre in Greece

One of the first problems we came across, was difficulty in applying simple things such as distributing drugs, because this had to be carried out by the police, who are neither pharmacists, nor nurses. Some patients were missing doses on an everyday basis. Also, we were fighting against diseases which depend on the detention conditions. So, it’s not easy to treat i.e. respiratory infections by giving drugs, when the patient lives in a room without heating.

Another problem is the fact that Greece is undergoing a major crisis, which has affected the Health System, rendering it weak of covering the health needs of people living in Greece – Greeks or migrants- especially those with no social security. In practice, this meant that collaboration with local health facilities was, at times very difficult due to the lack of resources.

Where were migrants in the detention centers coming from?

But we have also treated people from  Morocco, Sudan, Eritrea, Congo, Ivory Coast, Mali, and many other  countries.

What were their living conditions like? Was healthcare guaranteed for migrants in the Detention Centres (DC)?

Living conditions were inhumane. I have never encountered a DC that doesn’t lack heating (Evros and Drama regions are freezing cold), bad hygiene conditions, warm water was a luxury, the rooms were dark and in many cases the migrants were rarely brought outside to clean air. All these are factors that increase  the risk for communicable diseases amongst the detainees.

Healthcare is guaranteed…in paper. In reality, without the constant presence of healthcare personnel, the migrants’ access to health services ranges from difficult to completely absent. Since the police lacks interpreters, it is practically impossible for one to describe his/her health concern.  Even if this is achieved, the access to healthcare depends on the police, who are incapable of handling such issues (as they’re out of their field of expertise), which creates room for error and puts lives in danger. Policemen should not be put in the position of judging who is and who is not seriously ill.

What were the medical needs of this population?

During our intervention we encountered all sorts of medical problems which, in some cases, were serious and life-threatening. There were cases of chronic disease, acquired before detention or even congenital, which had never been detected and the mere exposure of our patients to detention conditions, as well as the complete absence of medical help could worsen their condition and, in some cases, lead to death.

Most medical problems we encountered were directly or indirectly correlated with the detention conditions; the routine diagnoses had to do with skin disease, especially scabies – that can be easily transmitted from person to person-, gastrointestinal symptoms – usually due to poor food quality or food intolerance, respiratory infections – probably due to lack of heating and overcrowding, musculoskeletal pain and, very often, psychological problems which ranged from simple sadness  to psychiatric conditions, such as PTSD, Major Depression and Psychosis. In these cases, detention is deleterious.

How did MSF assist these people?

In parallel with the management of the scabies outbreak , we had to respond to all other medical problems which we came across. The MSF medical teams were examining and treating migrants on a daily basis. Each patient communicated with us with the help of the MSF cultural mediators, which are absolutely essential.  Many times, we had to refer our patients to local hospitals for further diagnostic tests or treatment.

MSF doctors frequently found cases of people who had been victims of violence and torture. They often  gave testimonies to MSF teams, so that their stories can be heard.

The MSF psychologist  intervened in many cases, in order to provide assistance to the migrants who were in need

In some cases, when we found serious chronic disease in migrants, we advocated their release on medical grounds and followed up their condition after their release, until they were referred to specialized doctors.

Which were the biggest difficulties and challenges you faced and why?

Working in this project was a completely new experience to me. Although I had already been exposed to human suffering, during my previous experience, this was a very particular situation. People were detained, after fleeing violence and poverty. So, the biggest problem I can think of, is frustration; frustration with how governments and people  treat other  people. It is sometimes really hard to keep helping people in detention centers, suffering from diseases which are caused or worsened, mostly  by the detention itself  while more and more are being detained. It looks like banging your head against a brick wall. Dealing with frustration is, in my belief, sine qua non if you want to work either with MSF or as a doctor in general.