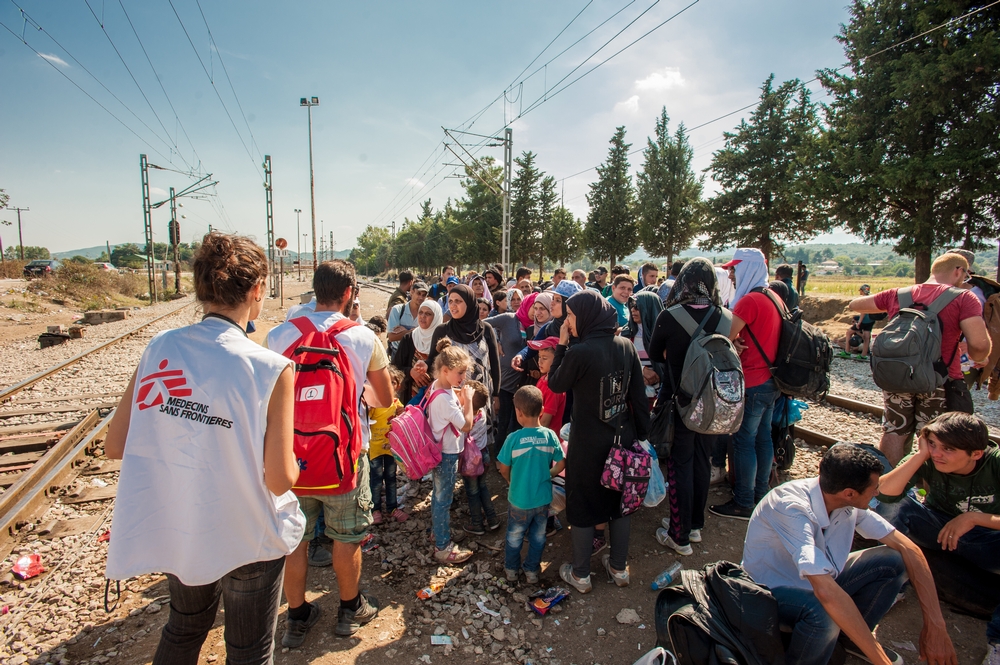 A team of Médecins Sans Frontières/Doctors Without Borders (MSF) logisticians have helped to build a transit camp with the capacity to accommodate more than 1,000 people in the Idomeni area in Greece, close to the border with the Former Yugoslav Republic of Macedonia (FYROM).

MSF has set up four large 240 square metre tents, and two tents of 45 square metres to be used for our medical activities. The camp is also equipped with basic sanitation facilities and a water supply.

The structures will serve as a facility for the thousands of migrants and refugees passing by the area every day.

As Idomeni is a small, remote village with limited capacity to host the people who arrive there, many refugees have to stay in squalid conditions. Many resort to staying outside, or at the train station, without shelter and with little access to food or hygiene facilities. With winter approaching, people will face even harsher conditions.

Lately, the MSF teams have witnessed a dramatic increase in the number of refugees crossing the border, sometimes seeing up to 5,000 people crossing every day.

Borja Ruiz Rodriguez/MSF
MSF logisticians Anibal Ordenes and Celine Van Lamsweerde build the first tent in a camp planned together by MSF and UNHCR in Idomeni.

“After many months of coordinated efforts and negotiations with authorities, we are pleased that we have managed to create this transit camp for refugees and migrants,” says Antonis Rigas, MSF project coordinator in Idomeni.

“With other European countries closing borders, we fear a domino effect leading to FYROM closing its borders as well. The new camp is a positive step towards the improvement of accommodation and hygiene facilities in case people get stuck here.”

MSF doctor Stavroula Kostaki treats a patient, whose feet are damaged, in one of our mobile clinics on the border of Greece and the Former Yugoslavian Republic of Macedonia. For more information about our work with refugees in Europe, visit msf.org.uk/europe. © Borja Ruiz Rodriguez/MSF

On 21 August, FYROM decided to temporarily close its border with Greece, leading to a chaotic situation in Idomeni, with more than 3,000 people being violently prevented by FYROM guards from crossing the border and being stuck for days without access to shelter, hygiene facilities or food.

“The shocking scenes we saw in August were a result of extreme measures to prevent desperate people fleeing violence and war from crossing borders.” says Aurelie Ponthieu, MSF's humanitarian advisor on displacement.

“But closing borders and using violence is not a solution, it is just provoking a humanitarian crisis on the other side."

Since April 2015, MSF has been offering medical consultations, psychological support and relief items in the Idomeni area on the border between Greece and the Former Yugoslav Republic of Macedonia (FYROM).

Find out more about our work with refugees