Greece: One year after Moria fires, Europe continues to deny dignity to migrants and asylum seekers on the Greek Islands

On the 8th and 9th of September 2020, the notorious Moria migrant camp was burned to the ground in what later became a symbolic moment showing the total failure of the EU hotspot approach on the Greek islands. One year after the EU promises of a fresh new start on migration, European and Greek leaders continue to deny basic dignity to asylum seekers and migrants searching for safety in Europe, while the hideous plan to construct prison-like camps in the five North Aegean islands is moving forward.

“In Greece, the future looks more dystopian than ever, as those who make it to cross the sea continue to live in miserable camps on the Greek islands. It is a tragic irony that as the world observes the latest developments in Afghanistan, the EU and Greece are inaugurating a new prison like-centre to trap refugees on Samos island. This is the best demonstration of the cruelty of the EU's migration policies”, said Konstantinos Psykakos, Head of Mission of MSF in Greece.

Our patients continue to report how the limbo situation on the islands, the arbitrary and fast track asylum processes, the fear of deportation and the precarious living conditions contribute to the deterioration of their health and mental health.

Children seeking mental health support to our clinic on Lesbos, often exhibit regressive behaviours such as aggression, withdrawal and secondary enuresis or present delays in cognitive, emotional and social development.

"It is a tragic irony that as the world observes the latest developments in Afghanistan, the EU and Greece are inaugurating a new prison like-centre to trap refugees on Samos island"

Konstantinos Psykakos, Head of Mission of MSF in Greece

People who have experienced significant trauma have difficulties in processing their very distressing memories and remain afraid for much of the time.

Post-traumatic stress disorder and depressive disorder symptoms are among the most predominant ones seen by our clinicians, reaching close or more than 50% of presentation among both our child and adult patients.

"They know what's going on in this shameful camp"

“There is no difference between the old Moria and Kara Tepe camp. The procedures are the same. It is the same system. As a sick person, I feel I am going from bad to worse day by day. The European parliament, the European Union, they know what’s going on in this shameful camp, but nobody can feel us” said Ali*, a survivor of torture in Syria who has been in Lesbos for one year and six months. 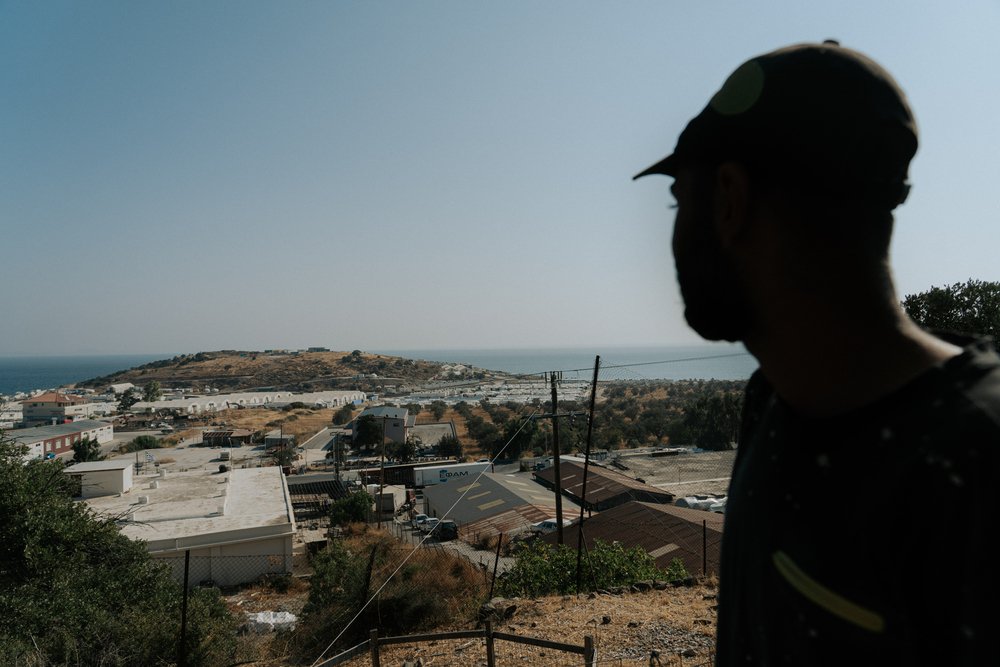 MSF
“I have been in Lesvos for 1 year and a half. If there was no war in Syria, I would have never left my country. I left because of the war. I have been held in prison there and I have been beaten so hard, that now I have a blood clot in my head."

“We are in bad mental health condition. Right now, I don’t know if we can get recognized as asylum seekers or if we are going to get another rejection”, said Mariam*, a mother of a two-year-old girl from Afghanistan who has spent already two years on Lesbos.

“Until now, my daughter has never been to a park. We have problems with getting permission to get outside of the camp. My little girl tends to have aggressive behaviors because of what she has witnessed here. She doesn’t like to play, to laugh, to speak or play with dolls”, she continues.

MSF
Mariam* is on Lesbos with her family, her husband and her 2-year-old girl, while she is also expecting another child.

Recently, MSF on Lesbos moved to a location near the camp of Kara Tepe, where our team provides vaccinations to children against common childhood diseases and sexual and reproductive healthcare services to refugee women, while we continue to offer mental health care to children and adults in our clinic in Mytilene.

As humanitarian crisis unfold in several parts of the world, MSF continues to call on European Commission, Greece and European States to implement policies that are focused on protecting and assisting refugees and asylum seekers instead of ways to deter, stop and deport those who seek safety in Europe.

MSF
"Whatever I say, cannot cover everything of what I want to tell you. The European parliament, the European Union, everyone knows what is going on in this shameful camp, but they cannot feel our pain. Whatever we say, will not make any difference."

This starts with refraining from building centers that will trap people in prison like settings on the Greek islands and rather focusing in humane and dignified policies of reception.

All facilities on the Greek islands must have as their sole purpose the provision of urgent assistance and facilitation of relocation of newly arrived asylum seekers to safe reception structures across Europe.