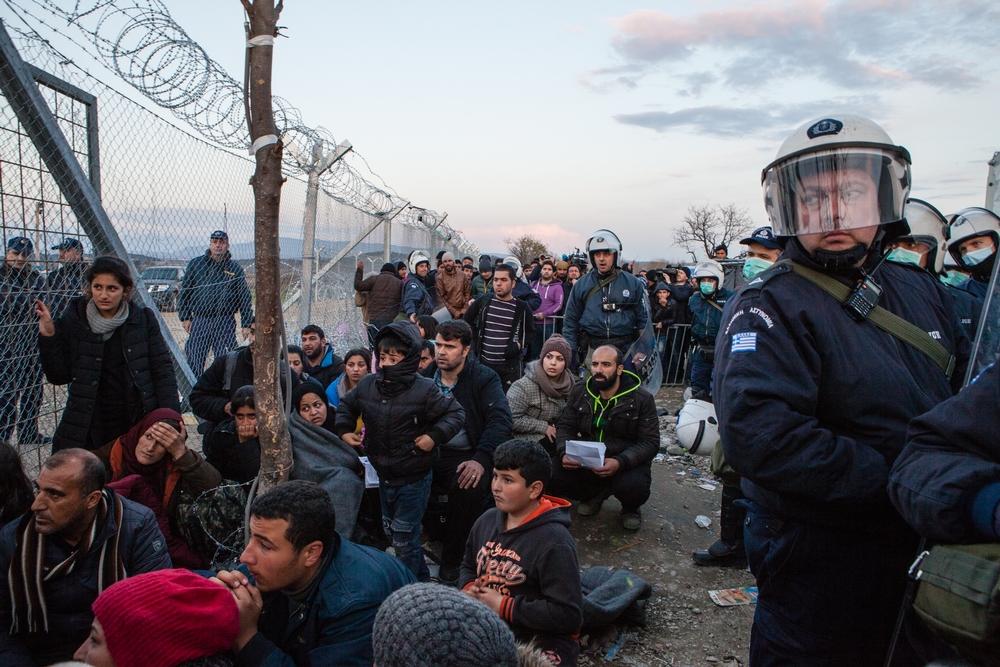 The winding road across the wheat fields near the Greek village of Idomeni is full of people shouldering large bags, carrying babies in their arms and putting one step in front of the other.

The stream of people continues day and night, but only 150 people each day, on average, can continue their journey out of this place.

They are all Syrians and Iraqis who are lucky enough to have a passport or ID card from their home country, and who are allowed across the border into the Former Yugoslav Republic of Macedonia (FYROM) and onwards to western and northern Europe.

Alex Yallop/MSF
Refugees and migrants walk through fields, towards the transit camp at Idomeni, on the Greek - Macedonian (FYROM) border.

Few are leaving but many more are still arriving, only to find themselves stranded in what is becoming an unsustainable humanitarian situation.

Today, in a transit camp with the capacity to host 1,500 people, more than 11,000 people are crammed in, full of anxiety and without any information about what is likely to happen next.

Among those stuck in the freezing camp at Idomeni are many families. Piman, an English teacher from Syria, has been on the road for two months now.

“I’m here with my family, sleeping in this small tent,” he says. “We never thought to find ourselves in this horrible situation.

"When we left our city, my kids wanted to bring their toys and their books with us. I was telling them, ‘Don’t worry, we will get new toys in our new house’.

They keep asking, ‘Where is our new house?’”

Alex Yallop/MSF
Médecins Sans Frontières (MSF) accommodation tents are seen in the background of the transit camp at Idomeni, on the Greek-Macedonian (FYROM) border.

Daniela, an MSF nurse, sums up the chaotic situation in Idomeni: “There is confusion, stress, a lack of reliable information. There is a growing feeling of anger. Many refugees have been waiting here for more than 10 days. People are extremely exhausted.”

In the clinic that MSF runs in Idomeni, whole families, pregnant woman and children arrive in a constant stream, as do many disabled people and elderly people suffering from chronic diseases.

Many people, including babies and the elderly, are forced to sleep out in the cold, with just with a sleeping bag to keep them warm.

The big tents put up by MSF have been full for days, and hundreds of small tents have spread across all the available space, even next to the train tracks.

Alex Yallop/MSF
A man looks through the border fence into Macedonia (FYROM).

“I've been here for a week, and I have no idea how much longer I'll have to stay,” says Mustafa, a refugee from northern Syria, who arrived in Idomeni with his wife Zuzan and two young cousins.

Entire families huddle round fires to keep warm as they wait for another night to pass.

Meanwhile, Rula, a 30-year-old woman from Aleppo, rests in the local hospital in Polykasto.

Heavily pregnant, she arrived in Idomeni with her husband Fahad and her one-year-old son, Oman.

After her waters broke in the MSF clinic, the team transferred her to Polykasto. Soon after she gave birth to her second son, whom she named Abdulrahmane.

Read more about the crisis on Europe's borders