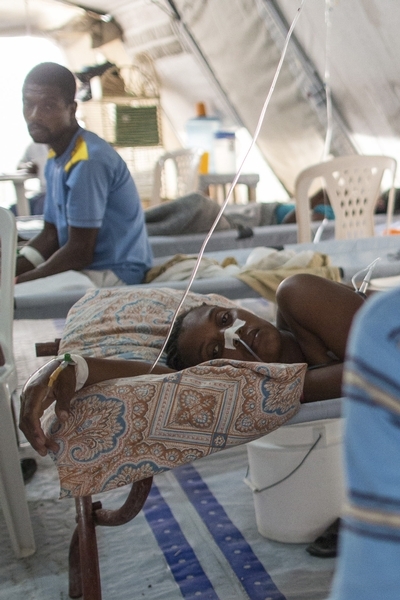 Two years after the cholera epidemic began, the continued treatment of patients is still not certain, even at a time when the population is still largely exposed to the risks of contamination.

In Port-au-Prince, more than 350,000 survivors of the earthquake are still being housed in camps, and many thousands are living in shantytowns, where sanitary conditions remain deplorable and are conducive to exposure to the disease. The population does not  have the means yet to implement the health measures they need to protect themselves.

Wilsème has been living in a camp now for almost three years:  “We’re living under difficult conditions, with no access to clean water and soap.

We know that we are at risk of being infected with cholera, but we don’t have any of the means we need to protect ourselves from the disease.”

Since the start of the year, over 12,000 cholera patients have been treated in the five cholera treatment centres (CTC) run by Médecins Sans Frontières (MSF) in Port-au-Prince and Léogâne, a town some thirty kilometres west of the capital. “This is a drop in the numbers, compared with the approximately 35,000 cases that we admitted during the same period in 2011 in Port-au-Prince,” indicated Oliver Schulz, MSF’s head of mission in Haiti.

“We continue to see an average of 250 new cases each week in our facilities, but this is still a high number,” he worries.

A patient rests in the MSF Cholera Treatment Centre in Haiti
A patient at the MSF Cholera Treatment Centre. MSF mobilised 400 international 4,000 Haitian staff to treat 160,000 patients since the start of the outbreak in October 2010. Haiti 2012 © Scott Eisen
Reduced international funding is limiting the response of the humanitarian agencies working in the areas of medical care and providing access to clean water and sanitation.  “This year, MSF  had to keep most of our CTCs open throughout the year because cholera  is far from being controlled.

The measures to prevent and treat cholera are still not enough,” lamented Schulz.

In fact, the response capability of the Ministry of Health remains extremely low two years after the onset of the epidemic. As a result, during the most recent peak last May, MSF treated more than 70% of the total number of patients registered in Port-au-Prince.

Wilsème is one of these cases.  He was hospitalised on an emergency basis: “I went to the public hospital, but they told me that they couldn’t treat me and I was sent to an MSF treatment centre, where I received care.”

Only lasting achievements in the areas of water and sanitation will make it possible to contain cholera. “This will take time, and this is why medical care for cholera patients remains a key challenge that the Haitian authorities need to address right now,” Schulz explained.

Cholera is a disease that is easily treated, but it is crucial that specific  treatment centres be accessible and that patients be brought to them as soon as possible after the first symptoms appear. Without adequate treatment, the disease can take a person’s life within just a few hours.

Simple measures to include the treatment of cholera as part of the services offered through Haiti’s health-care facilities would bring about a reduction and facilitate patient access to treatment in the future.

Accordingly, MSF remains mobilised to support the Haitian health authorities during the peak periods and provide technical and logistical support to health-care facilities with a view to facilitating integration and the treatment of cholera.

Since the cholera epidemic began in October 2010, the disease has claimed over 7,500 lives out of a total of approximately 600,000 known cases (approximately 6% of the population).

As soon as the first cases were confirmed, MSF began an operation that is without precedent in the entire country. Between October 2010 and November 2011, MSF had over 75 CTCs scattered throughout Haiti. During this period, 4,000 Haitians and 400 international staff were mobilised to treat a total of over 160,000 persons.