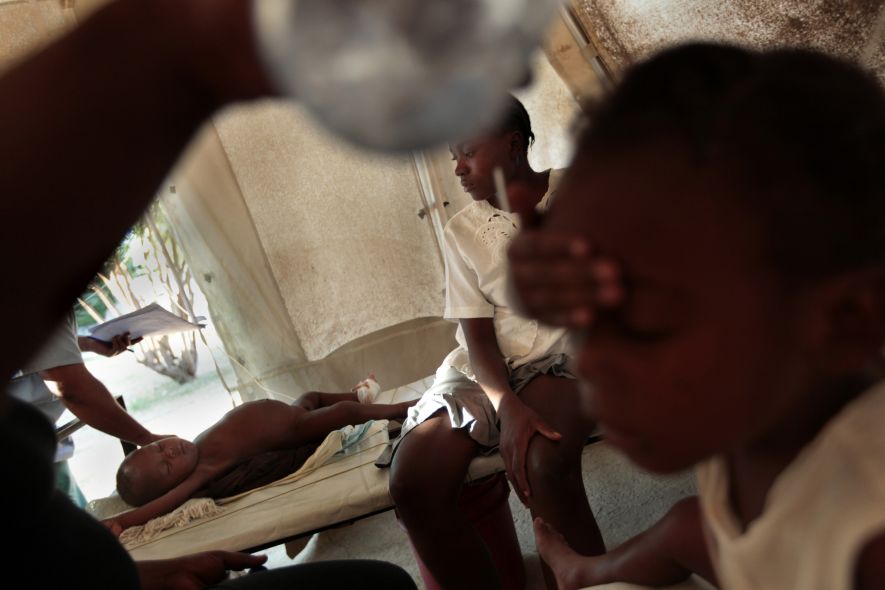 Since October 22, 2010, MSF has treated 62,000 people with cholera symptoms in Haiti. This week, MSF's 4,000 Haitian staff and 315 international employees treated close to 2,000 patients daily in the 47 centers and cholera treatment units across the country.

However, the epidemic increased sharply in the South. In Jacmel, in the south east, approximately 100 patients arrive at MSF's 50-bed cholera treatment unit every day."Our team had to handle an inflow of 260 in a single day," explains Dr. Loreto Barcelo, MSF's coordinator in Jacmel. "There were people everywhere … Patients, their families … There were several hundred people at the treatment site. We had to put up to four patients in a single bed and try to save as many as possible while waiting for extra help to arrive. We now have an additional 20 nurses helping us and opened a new 100-bed treatment center, which is helping us manage the situation."

The epidemic continues to spread in Haiti's northern cities and rural areas.  Over the last week, more than 4,000 patients were treated in the North, and 1,100 in the Northeast. MSF teams are expanding the number of units and treatment centres and are setting up rehydration points. This is a huge logistical challenge as the areas affected are extremely hard to reach.

This week, new cholera treatment facilities were set up in Pignon, St Raphaël, Ranquitte (Nord), Gaspard (Nord Ouest), and Jérémie (Grande Anse). However, as the epidemic continues to spread, the response by local and international organizations remains inadequate.

The possibility of launching a vaccination campaign has been raised.  Under the circumstances, epidemiologist Kate Alberti wonders if this is appropriate. "The epidemic affects the entire country today, including the most remote areas. This isn't the time to carry out a vaccination campaign. The priority is to treat patients, provide access to chlorinated water and improve hygiene measures to prevent others from becoming ill." However, Alberti adds, "In the future, we will consider vaccination as a viable option to immunize the population and limit the appearance of a new epidemic."

MSF treated 96 victims of the violence that erupted in Port-au-Prince and several other cities between December 7 and 12. Of that number, 38 had gunshot wounds. Four people died of their wounds. MSF has surgical supplies and medical teams at six facilities in Port-au-Prince and two in other regions of the country. The organization remains prepared to treat any additional wounded patients. Despite the insecurity, MSF teams have managed to ensure continuity of medical care, including responding to the cholera epidemic and treating persons wounded in the violence.