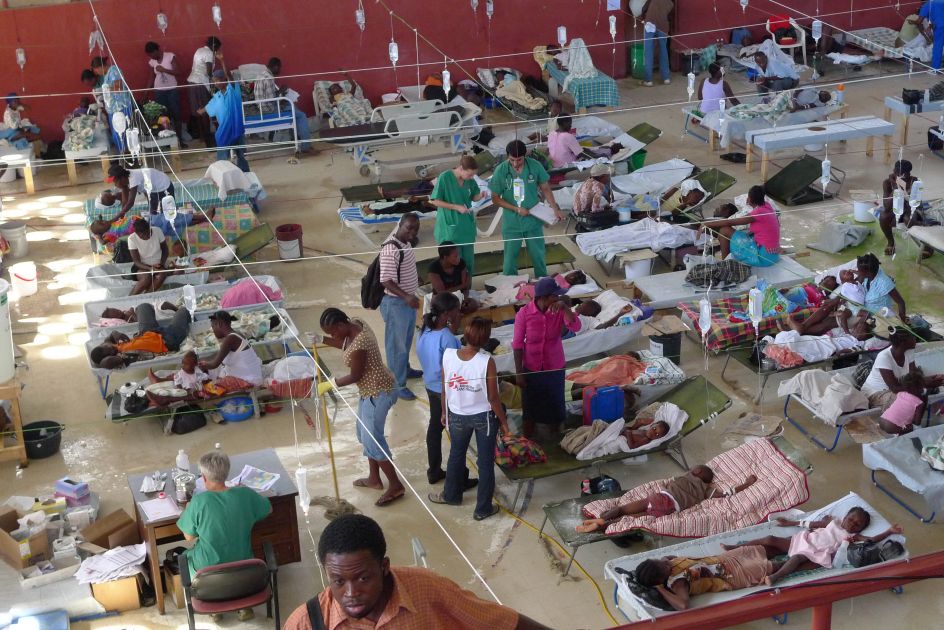 Haiti cholera: A place where people went to die

On November 5, an MSF emergency team travelled to Cap Haïtien, the country's second-largest city (325,000 residents), located in the north. From the start, the work has involved medical care and a communications campaign. The campaign's goals are to demystify the illness and explain how people with cholera are treated, distribute information on prevention and explain MSF's activities.

The initial images of the cholera outbreak were traumatic. The hospital isolated the first cases in the city's Gymnasium, but medical personnel lacked the resources and adequate supplies required to take action in response to the epidemic. Lack of knowledge about the disease -- which moves swiftly if not treated in time -- left Haitians at all levels of society vulnerable to fears, rumors and speculation. Patients stigmatized by their communities were afraid to tell anyone that they were ill. They died at home or reached medical facilities too late to be treated.

When the MSF team members arrived, they found approximately 30 patients in the Gymnasium. The mortality rate was very high. To Cap Haïtien residents, the sports center was a place where people went to die. "One of the key problems was explaining the illness to the authorities and the population, who wanted to close the Gymnasium," says MSF's emergency coordinator, Helmi Mekaoui. "People were terrified by what they saw. There were dead bodies in the streets."

After negotiating with the authorities and the population, the cholera treatment center (CTC) was set up inside the Gymnasium and people were hired to manage the crowd and collect the waste strewn on the ground. The emergency team focused on communications – both information and images – to explain and demystify the illness so that people would accept a treatment center nearby. "While the medical teams worked ceaselessly to reduce mortality and save as many lives as possible, the health educators went into the communities and identified patients, the people with them and passersby to show them that the center had been cleaned up and that patients were being cared for there." Four weeks later, MSF had treated more than 4,000 patients at the CTC in the Gymnasium and the fatality rate had fallen from approximately 14%. (The mortality rate is now below 2%, at approximately 1.4 %.)

Cholera: an illness that's easy to treat and prevent – if people know how

When the IEC (Information, Education, Communications) health promotion team was set up, team members had to start at the very beginning because the Haitian population knew nothing about this illness. "Patients were arriving at the CTC but they didn't know what they had," explains Hugues Juillerat, MSF's IEC program manager in Cap Haïtien. "As soon as we got there, our most important job was to get the message on treatment and prevention out to as many people as possible." Health and information workers were hired and trained to inform patients and the people with them about the illness, how it is transmitted and how to prevent it. Their goal was to make sure that the information reached family members, neighbors and friends. In two weeks, the IEC team grew from six to 40 health workers who made their way through the CTC's hallways in the Gymnasium and criss-crossed the streets of Cap Haïtien to educate the population.

"People don't understand that such a fatal, contagious illness can be treated so easily, or that it can be prevented by methods that are seen as so rudimentary – by washing hands, drinking potable water and providing sanitation," Mekaoui says. The health educators explained to patients that they would be treated with rehydration and given an oral serum (a saline rehydration solution). "Patients think that if you don't give them pills, they're not being treated," says Lukinson Jean Francois, the supervisor of the CTC health workers. "You have to explain that rehydration gets rid of the cholera vibrio. You also have to remind their family and friends constantly about hygiene rules (including washing hands with chlorinated water after being in contact with the patient and not sharing food with them), because in the beginning, many of those people were getting sick, too."

Haiti 2010 © Aurelie Lachant/MSF
Haiti 2010 © Aurelie Lachant/MSF
The local media also plays a role in educating the population. Radio spots explaining prevention measures in Creole are broadcast continuously on the major stations in Cap Haïtien and surrounding areas. Broadcasts are organized with MSF health workers and medical staff to emphasize prevention measures and answer questions about treatment and transmission. The goal is to demystify the illness and address preconceived notions and the stigmatization of patients, but also to encourage people who are ill to get to a CTC as quickly as possible.

In early November, the recovery room was full of patients who were no longer ill but were afraid to return home for fear of infecting others. People had gradually come to understand the CTC and the treatment provided there. "When they saw mortality rates dropping, they began to realize that the Gymnasium was no longer a place where people went to die, but that most people had recovered when they left," Juillerat explains.

Until the epidemic ends, there's still work to do – especially in the more distant communities.  Health awareness personnel are working with MSF's mobile outreach teams, who travel to clinics in rural areas to provide supplies and training and recruit local health workers who will then be able to educate the communities. On December 1, the IEC team opened an information center in central Cap Haïtien, where three health workers talk to passersby to spread the word about prevention methods. "In the first three days, the information center registered more than 300 visitors each day," says the Emergency Coordinator. "That's a good indicator of the need to educate and create awareness in the communities."Although it is still difficult to measure the impact of the awareness campaign, Juillerat notes that "the questions people ask now show that they have a better understanding of the illness and how it's treated than they did a few weeks ago. They're not afraid to go to the Gymnasium any more."

Oral rehydration points (ORP) have been set up. "This allows patients who are just developing symptoms of the illness to be treated and prevents those who live too far from a treatment center from reaching a stage of advanced dehydration," explains Narcisse Wega, medical manager in Plaisance.

By extending its work into the Northern Department, MSF is ensuring that health awareness efforts move forward, together with medical activities.