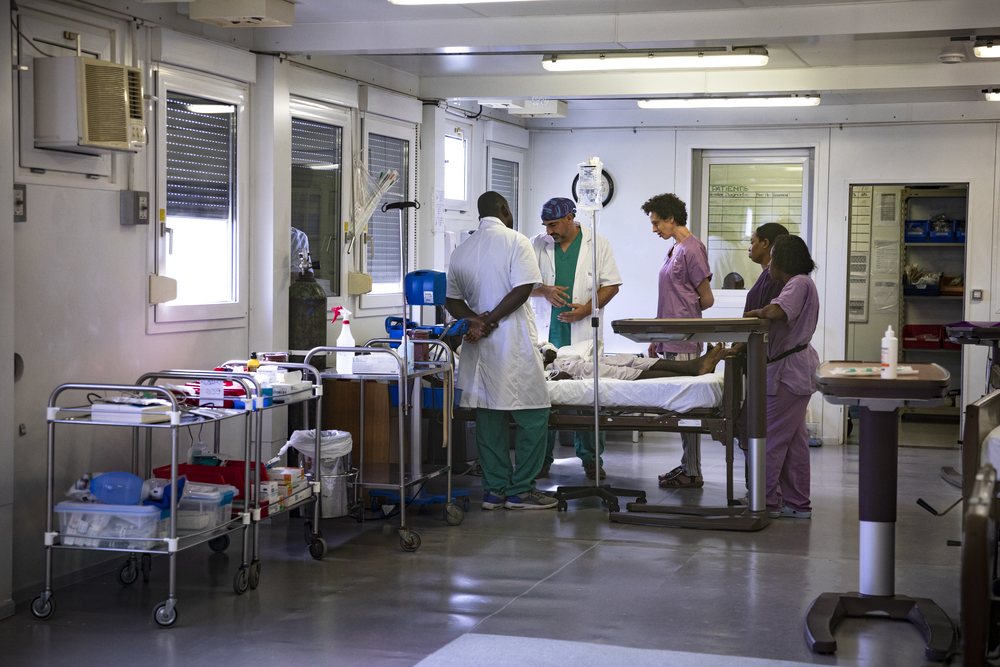 Haiti: A day in MSF's emergency trauma hospital in Port-au-Prince

Since its opening on November 27, patients have been arriving at MSF's hospital in the Tabarre area of Port-au-Prince. Specializing in emergency trauma care, the hospital reached its initial capacity of 25 beds in its first two weeks.

The medical needs reflect a high level of violence as a political and economic crisis continues in the country. Since September 2018, widespread demonstrations known as peyilòk (which roughly means "closed country") have taken place in Port-au-Prince and beyond, with barricades in the streets, protests and clashes.

It is 9 a.m. on Sunday, December 8, when the first patient of the day arrives at the MSF hospital.

She is a 29-year-old woman with gunshot wounds. Her hands are swollen and bloody. The teams—doctors, nurses and stretcher-bearers—attend to her immediately. "Bandits ordered her to put her hands together before shooting her twice," a nurse says. The X-ray reveals a double fracture on each hand. 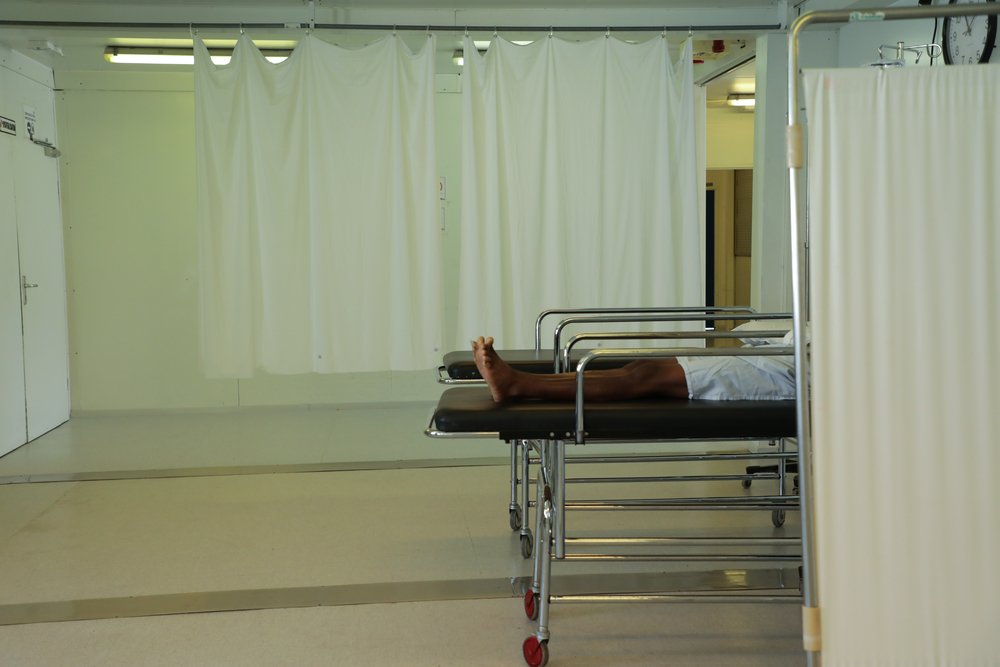 Nicolas Guyonnet/MSF
A woman injured by a bullet in both hands presented for admission to MSF supported Tabarre hospital, Port-au-Prince, Haiti, December 2019

The hospital are admissions criteria are strict and it admits only patients who need emergency trauma care. "We want to focus on patients who need lifesaving care, because we do not have unlimited capacity, and we want to mobilize our resources for the most important cases," says Jean-Fabrice Pietri, MSF project coordinator.

Tensions in the country

From September 2019 onward, large demonstrations took place in Port-au-Prince, with barricades in the streets preventing people from moving. It was a struggle for hospitals to obtain supplies and for ambulances to go where needed.

Since late November, there has been a relative calm in the peyilòk demonstrations. For example, only at the end of November did some schools reopen, after they were closed for months due to the tensions. The situation in the country remains chaotic. 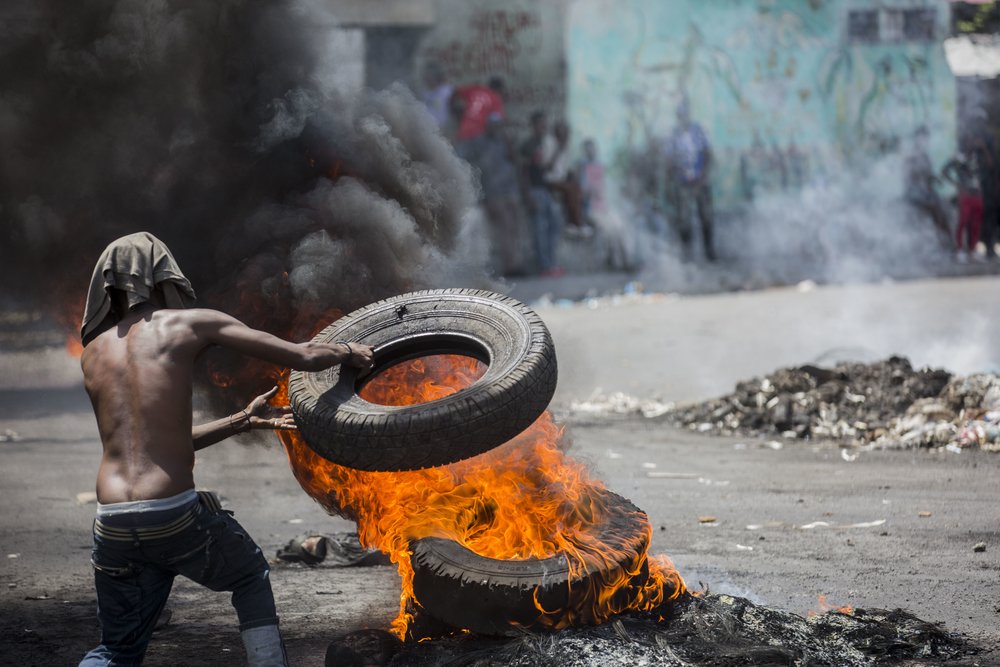 Jeanty Junior Augustin/MSF
A protester is blocking a street with burning tires during a demonstration in Port-au-Prince calling for the departure of President Jovenel Moïse on 13 June, 2019.

The hospital opened with an initial capacity of 25 beds, which were quickly filled as patients arrived in the first two weeks. "We knew we were meeting a need here, in terms of serious and urgent cases, but obviously the situation is even worse than we imagined, so we will have to adapt quickly enough, and go faster than we had anticipated," Pietri says. In the first three weeks, more than 250 people were triaged at the hospital, more than 100 of whom were hospitalized. The staff has had to add beds quickly to cope with the high number of patients, and the hospital is approaching its planned capacity of 50 beds. 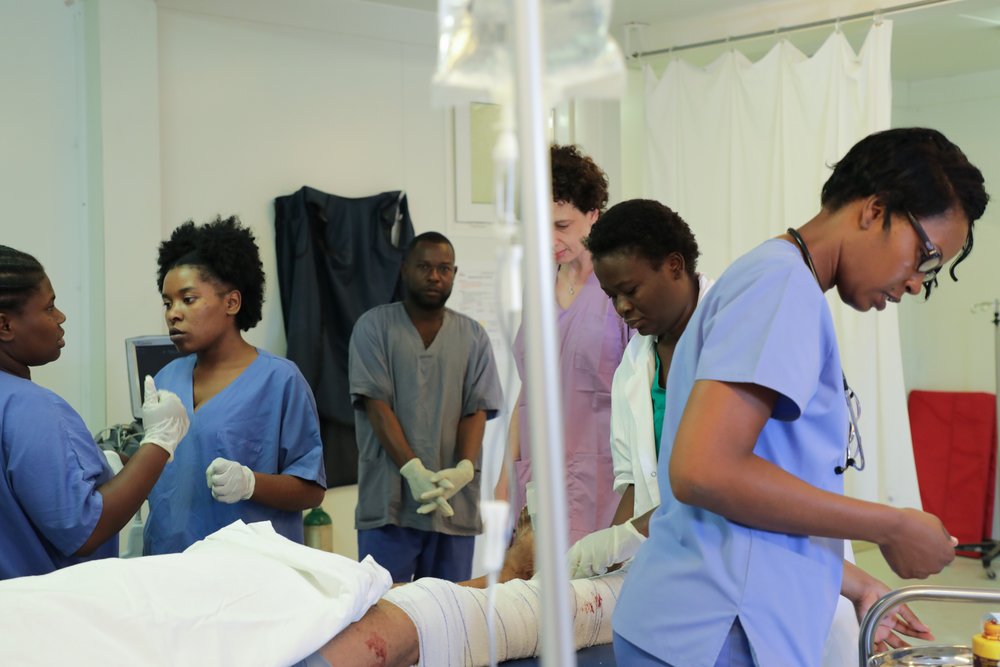 Jean-Baptiste, the second patient of the day, was injured in a motorcycle accident. He was struck by the bumper of a van and suffered injuries as he was dragged for several yards. He has a severe open fracture in the right tibia and burns on his hands and has lost a lot of blood. 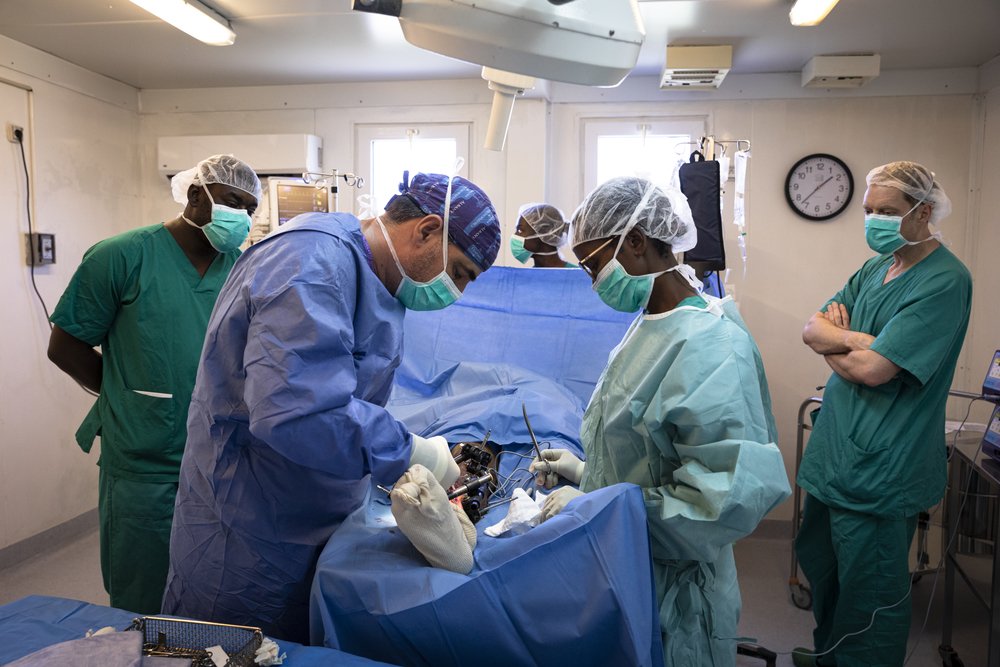 Leonora Baumann
Jean-Baptiste, 42 years old in the operating room. Jean-Baptiste was hit by a car on his way home on a motorcycle.

Once he is stabilized and his leg is X-rayed, he is rapidly taken to the operating room. "With him what we saw was a very extensive wound on the anterior side of the lower leg, where he lost all his skin," said Thomas Schaefer, an orthopedic surgeon. "There's an underlying open tibia fracture, and so you have fascia, muscle and bone altogether on view, which makes this a very, very extensive case of an open fracture."

The patient requires an external fixator to hold his broken bone in place, skin grafts and a long hospitalisation. Because the wounds left his nerves and arteries largely intact, the team treating him believes his leg is likely to heal. 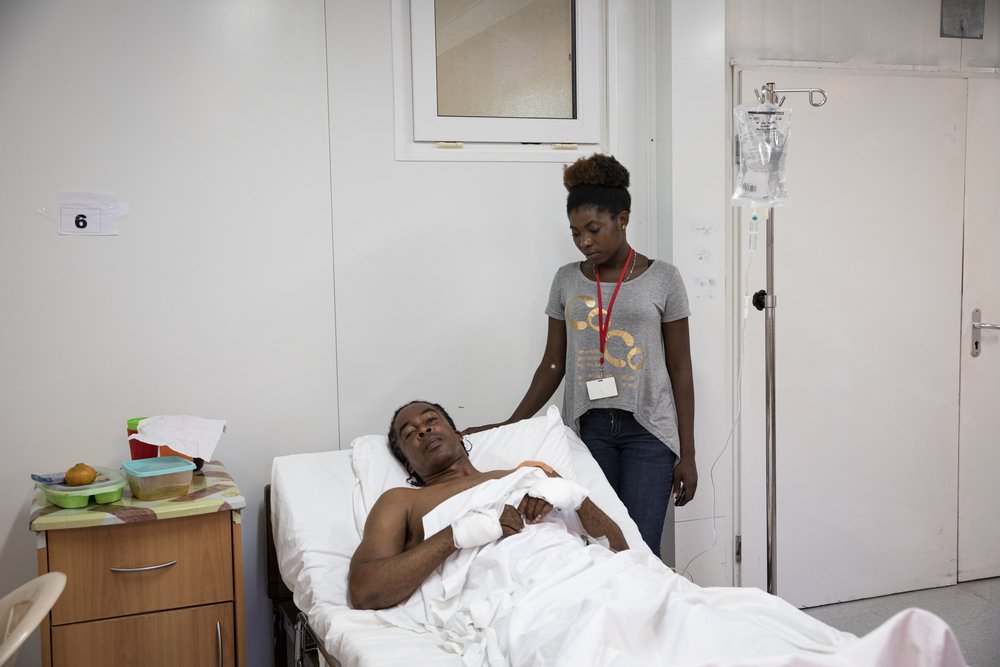 Leonora Baumann
Jean-Baptiste with his sister during a visit to the hospital ward.

Like Jean-Baptiste, people admitted to Tabarre often require several days or even weeks of hospitalization, because of the seriousness of their injuries and the number of operations necessary for their recovery. 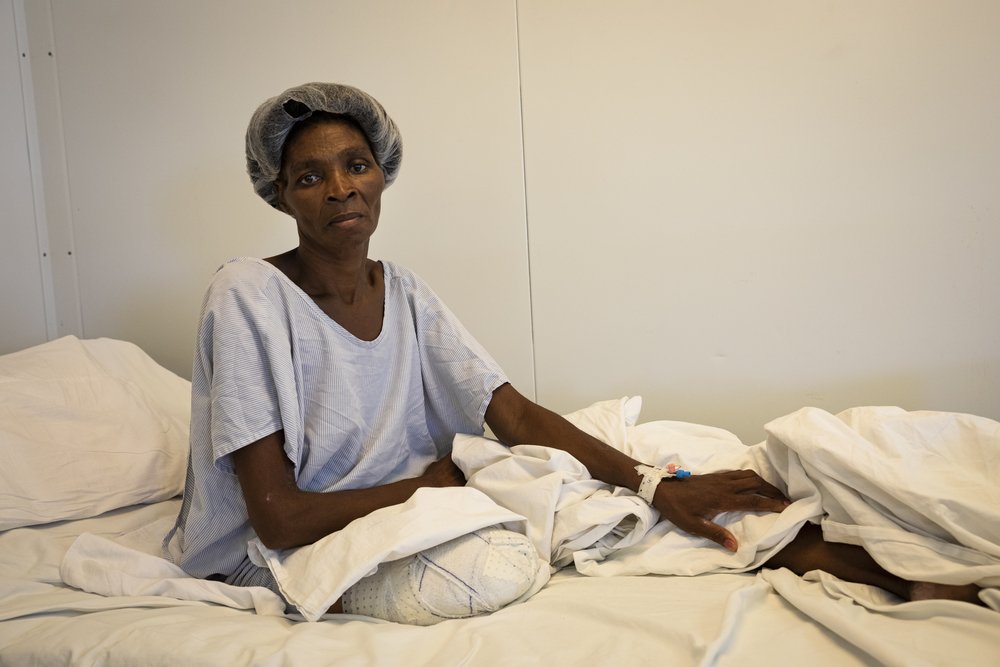 Leonora Baumann
Following the reopening of Tabarre hospital, Clotide, 52, was the third person admitted and the first patient to have had an operation.

Clotilde, 52 years old, was hit by a stray bullet in her right leg during a clash between rival gangs. She first went to the MSF emergency and stabilization center in Martissant, before being transferred to the MSF hospital in Tabarre. Unfortunately, the bullet hit major blood vessels, and MSF teams could not save her leg, which had to be amputated. Gunshot wounds account for more than half of the hospital's admissions.

However, some patients can be stabilized, treated and discharged after only a short hospital stay. Jameson arrived a little after 11 a.m. that Sunday, in shock and with a large wound on his left shoulder. 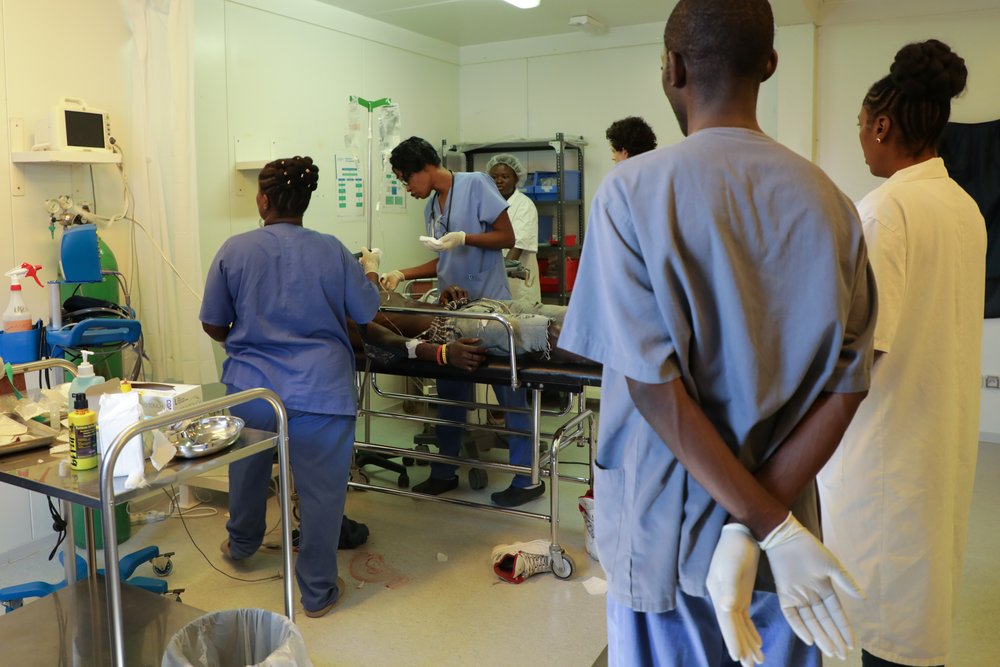 Nicolas Guyonnet/MSF
MSF teams are mobilised to take charge of a patient's operation.

His is a 28-year-old father of three, and was attacked while playing dominos with friends. He suffered multiple stab wounds. "The path that the weapon took in his body needs to be explored," says Thierry Binda, the medical activity manager. "We don't know the weapon and we don't know the trajectory and the depth of the wounds. This requires the patient to be hospitalized, while the patient is at risk. After an observation period, the patient can be discharged if, through our monitoring, we are certain that there are no complications."

Jameson's X-ray revealed that there was no lung damage, and after treatment and two days in hospital he was able to return home. 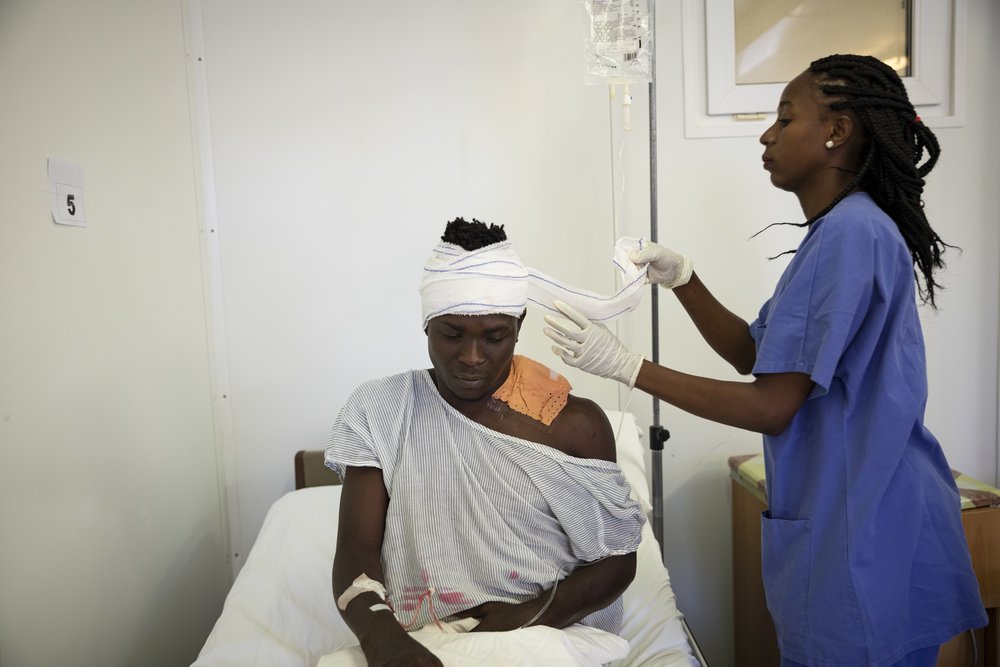 Leonora Baumann
An MSF doctor inspects the wounds of Jameson, 28.

Other cases require extensive surgery, such as this 26-year-old young man who arrived at the hospital at 1 p.m. He was severely injured by a firearm and, during the clinical examination, the doctor noted an entry wound at the level of the abdomen, without finding an exit wound. 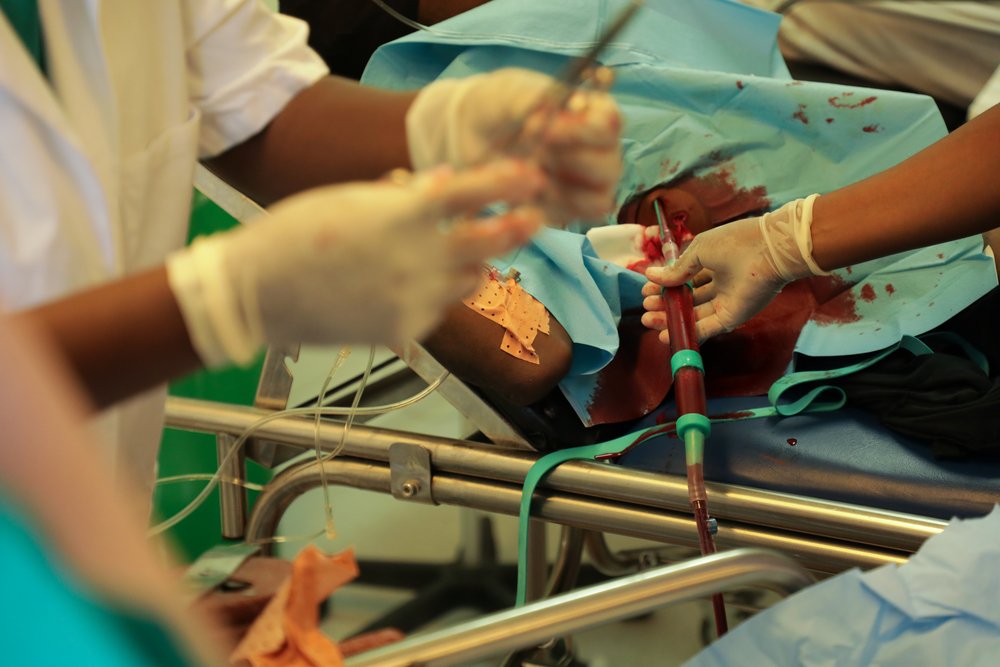 Nicolas Guyonnet/MSF
Installation of a chest drain on a patient, victim of a pistol shot.

The patient was conscious but could not move his legs. First, the MSF team inserted a chest tube to avoid complications related to ongoing bleeding, before performing an X-ray and a laparotomy—examining the abdomen to determine how much damage the bullet caused. 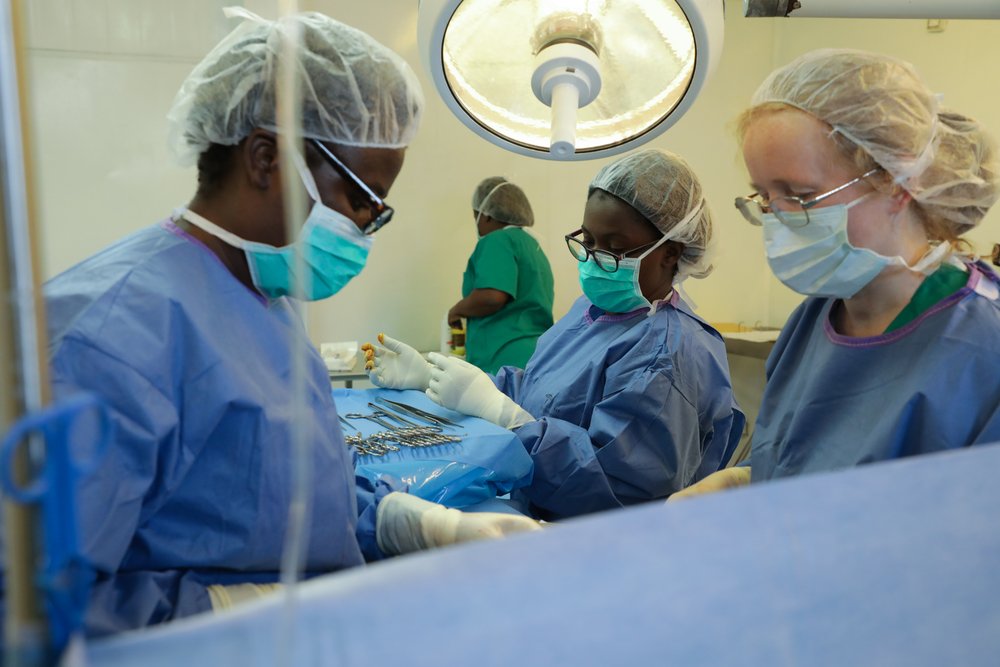 The operation showed no damage to vital organs—the bullet narrowly missed the liver. Radiography confirmed the initial hypotheses in the emergency department: that the bullet did not come out and was lodged in the patient's spine. 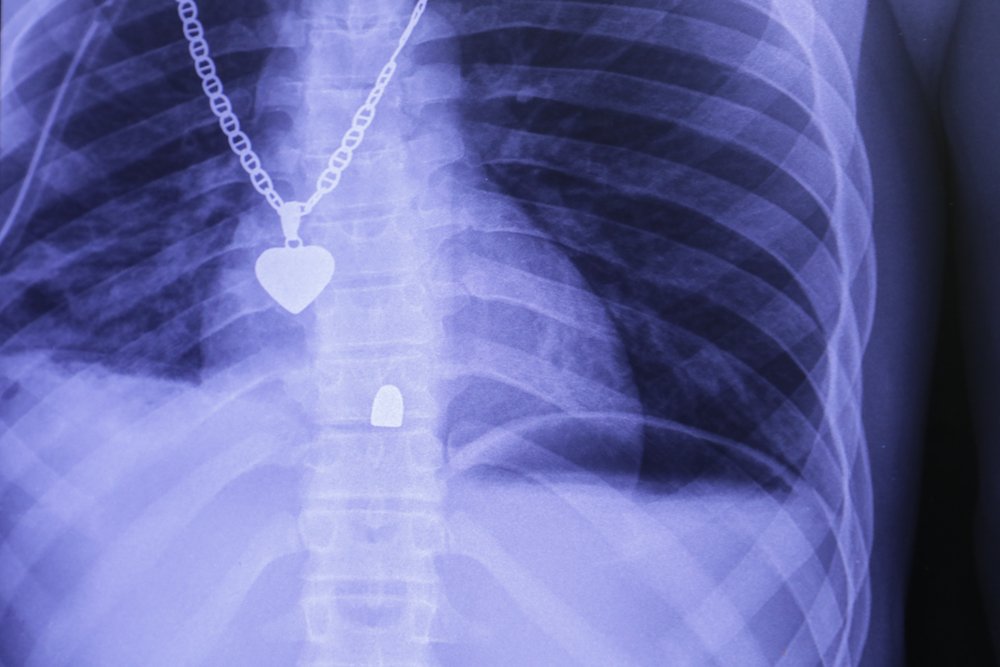 Nicolas Guyonnet/MSF
X-ray of the chest of a patient victim of a pistol shot. The ball lodged in the spine.

He was then transferred to the intensive care unit of the hospital. "There is potential damage to the abdominal muscles, along with paraplegia, which can make it even more difficult for him to breathe," says Elsa Carise, a physician anesthetist in intensive care. "It requires constant monitoring and much more nursing care and possibly medical attention than patients normally receive in a hospital." 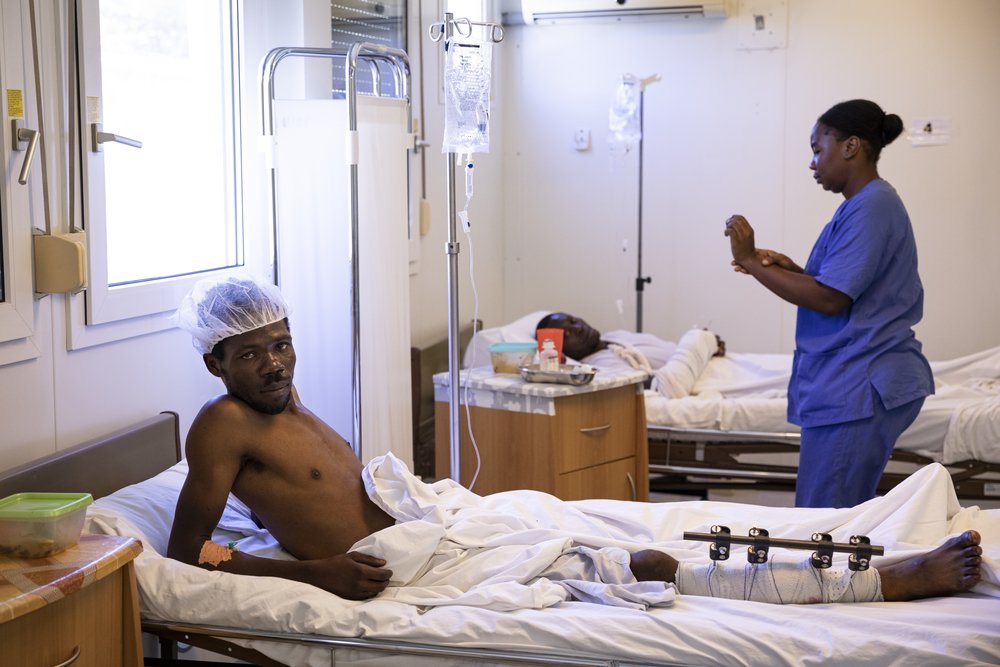 Leonora Baumann
Wilken (centre), 34, in the hospital ward. A father of two, Wilken makes a living working as a street vendor of water bags.

The severity of the gunshot wounds depends on numerous factors, including the path the bullet takes, as it damages organs and blood vessels. The case of this young man is not uncommon. "We have received many cases of gunshot wounds in the chest and abdomen," says Katherine Holte, MSF surgeon. "With the visceral surgery team, we have been able to save the lives of many patients. These are wounds, holes in the abdomen which, without surgery, cannot heal on their own ... So it’s clear, we have saved many lives here."

OUR WORK IN HAITI >