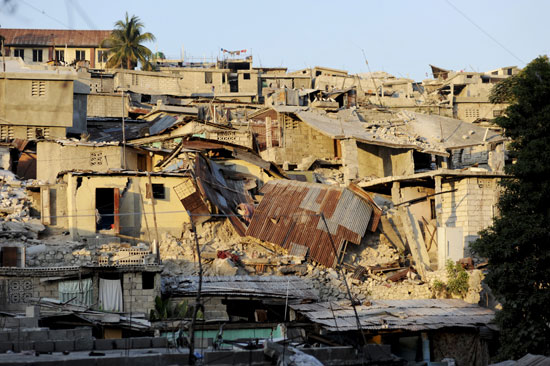 ©  Julie Remy/MSF
The downtown area has been one of the most severly damaged in the earthquake.

* 7.0 quake strikes 15km South-West of Port-au-Prince.
* Massive destruction of buildings and huge loss of life. Most of the estimated 200,000 deaths probably happened very rapidly.
* All of MSf's facilities are damaged, some severely. Many staff are missing.
* Within minutes, injured people start arriving at MSF's sites. Emergency first aid given all evening and night.

Haitians left homeless in the aftermath of Tuesday's earthquake rest at a park in Port-au-Prince. January 2010.

* Martissant evacuated and patients moved into tents. 300 new cases treated for trauma, fractures and burns.
* Pacot also deals with 300 patients, La Trinite with over 400.
* Petionville admin offices become a tent clinic with over 200 treated. Others at Solidarite.
* One MSF coordinator, Stephano Zannini, describes what he sees in the city as "Chaotic. Many hospitals are damaged and I saw a distressing number of dead bodies."

* Need for wound care and surgery is overwhelming.
* MSF search for buildings that could be used as operating theatres. Surgery starts under plastic sheeting.
* Struggle to get medical materials and staff into Haiti. Only one MSF flight with 25 tons is able to land so far.

* Choscal Hospital, where MSF used to work in Cite Soleil, starts as new MSF treatment centre with 300 transferred from Martissant.
* 1,500 patients seen so far in all MSF locations.
* Race against time with infected wounds needing care and surgery.
* Blockages at airport hamper MSF flights. Only 9 new staf have been able to get in so far.

* Choscal Hospital starts surgery.
* 2,000 patients have been treated so far in all locations.
* 41 new staff have arrived by now.

* Teams focused on life saving surgery, for which the need is still overwhelming.
* Trinite Hospital has two operating theatres, one in a shipping container. Choscal also has two theatres working around the clock.
* Carrefour Hospital opens and treats 500 patients in the first day.
* Assessment missions outside of the city to Leogane and by helecopter to Jacmel find many injured and untreated people.

© Benoit Finck/MSF
An operating theatre in a container at Trinite Hospital.

* 3,000 people treated by this stage, with 400 surgical cases.
* 130 new staff have arrived since the quake.
* Major concerns about medical supplies running out and cargo flights not getting in to Port-au-Prince.

* Another new hospital opens at Chancerelle in Port-au-Prince focussed on trauma and obstretic care.
* Dialysis for kidney consequences of crush injuries starts.
* Supply problems mount. Surgeon Paul mcMaster says "One day we ran out of an anaesthetic, the next is was plaster of Paris and today we have no crepe bandages."
* The remaining parts of the inflatable hospital reach Port-auPrince by road from the Dominican Republic.

* 6.1 aftershock terrifies patients in the wards and most have to be taken outside to tents.
* MSF surgical  teams averaging 130 operations a day.
* There are now 8 operating theatres.
* Psychological support started for amputees and their relatives.

© Julie Remy/MSF
A patient is cared for by MSF staff in a tented area, Martissant.

* Carrefour and Pacot buildings no longer safe after the tremor.
* Mobile clinics begin in Port-au-Prince and outside in the Grand Goave and Dufourt.
* Surgery starts in Leogane town.
* New staff reaches 200 with 200 tons of material having arrived.

* MSF has treated 5,400 patients since the earthquake.
* Choscal hospital is operating on over 30 patients a day and sees a growth in gunshot and machete wounds.
* The mobile clinics find large numbers of people who have not been able to find medical care with untreated injuries.
* MSF records, with great regret, that it has established that four Haitian collegues died in the disaster.

* Huge needs for post operative care and for treatment of people with infections or complications from initial injuries.
* Bicentenaire post operative facility opens, along with another in Port-auPrince in a kindergarden.
* Distribution of family kits of blankets, soap, cooking utensils starts in Jacmel.
* Greenpeace boat 'Esperanza' docks in Port-au-Prince and unloads more of these supplies for MSF.

* MSF's International President Dr. Christophe Fournier, who is in Port-au-Prince, offers condolences and thanks to Haitian staff. "So many of you have lost your houses, friends, family members. And yet you are all here working hard to save lives, to treat people."
* Haitian surgeon, Dr. Phillipe Brouard, who has worked with MSf since 2006, says "You focus on the patients all day - you cure people - but when you go home you see the state of your country and that does something to you."

* The inflatable Saint-Louis hospital opens in a field in Port-au-Prince, housing 200 patients and two operating theatres.
* 260 new staff now and 6,200 patients treated.
* 18 MSF psychiatrists and psychologists are providing support to patients and medical staff who worked through the quake.
* Household essentials distributed in Grand Goave and Leogane towns.

© Benoit Finck/MSF
An operation in the Saint-Louis inflatable hospital.

* New phase of surgery underway. Rosa Christani, one of MSF's Emergency Medical Coordinators explains, "While we have done life-daving interventions so far, we need now to be able to do more limb-saving operations, where wounds are infected and threaten the limb."
* 54 dialysis procedures have been carried out.
* 'New Carrefour Hospital' opens in a school beside the original building that is now unsafe.
* Supplementary feeding for children begins via mobile clinics in the Carrefour area.

* Fearful patients moved out of Leogane hospital to tents in the grounds.
* Tent clinic in Carrefour Feuille camp of 9,000 people.
* Martissant hospital records over 2,000 patients treated since the quake.
* Supplies flown to Port-au-Prince and Dominican Republic reach 650 tons.

* More than 11,000 patients treated since the earthquake, 1,300 surgical operations
* Operating theatres remain busy: Leogane teams doing 30 operations a day
* Lycee site opens for post-operative care, minor surgery
* In many of MSF's clinics 20 per cent of the consultations are for mental health issues

* By now, MSF is improving access to water and sanitation for around 40,000 people.
1,280 Haitian and 353 international staff.
* Chancerelle hospital has an average of 12 births a day, 40 per cent of them by Caesarian section.
* Post-operative tent “village” at Delmas 30 takes first 30 patients.

* MSF hospital beds in Haiti reach 740
* 1,400 tonnes of material has arrived in Haiti and the Dominican Republic.
* Post-operative facilities in Promesse open and Bicentenaire completes 50 bed extension.
* Generous support from the public around the world to MSF’s work reaches 70 million euro. MSF has already committed 20 million euro to cover the work to the end of February.

* MSF now has 393 international and 2784 Haitian staff working in it's biggest ever disaster response to date
* A total of 28,251 patients have been treated at MSF's 20 sites and 7 mobile clinics
* An emphasis on post-operative care including physiotherapy and mental health including three dedicated sites - Promesse, Delmas 30 and Sarthe
* Primary healthcare is also being prioritised with the opening of new outpatient departments
* MSF is stepping up the distribution of tents as well as blankets, hygiene and cooking kits
* Water distribution and the provision of wash facilities and latrines is ongoing

* In response to the dire situation confronting people living in makeshift camps or on the street, MSF is stepping up the distribution of tents and plastic sheeting, as well as blankets and hygiene and cooking kits
* A total of 14,238 kits distributed so far
* 41,232 patient now treated by MSF across 26 sites and 4 moblie clinics
* Opening of new out-patient departments and the creation of additional capacity for secondary health services, including emergency obstetrics, intensive care for malnourished children and inpatient care for paediatrics and adults

© Mashid Mohadjerin
50000 displaced people camp out at the prestigious Club Petionville, transformed into probably the biggest refugee camp in Haiti