September 8, 2021—The greatest number of deaths and injuries from Haiti’s August 14 earthquake occurred in the country’s southernmost region, the Sud department. Prior to this disaster, hospitals and clinics were already scarce in remote areas of Sud, and the earthquake damaged or destroyed many health facilities and roadways, making it difficult for earthquake survivors in rural areas to reach care quickly.

"The hospital was overwhelmed"

At Hôpital Immaculée Conception (HIC) in Les Cayes, the capital of the Sud department, an MSF medical team is providing surgical and post-operative care to more than 90 patients through a collaboration with the ministry of health. 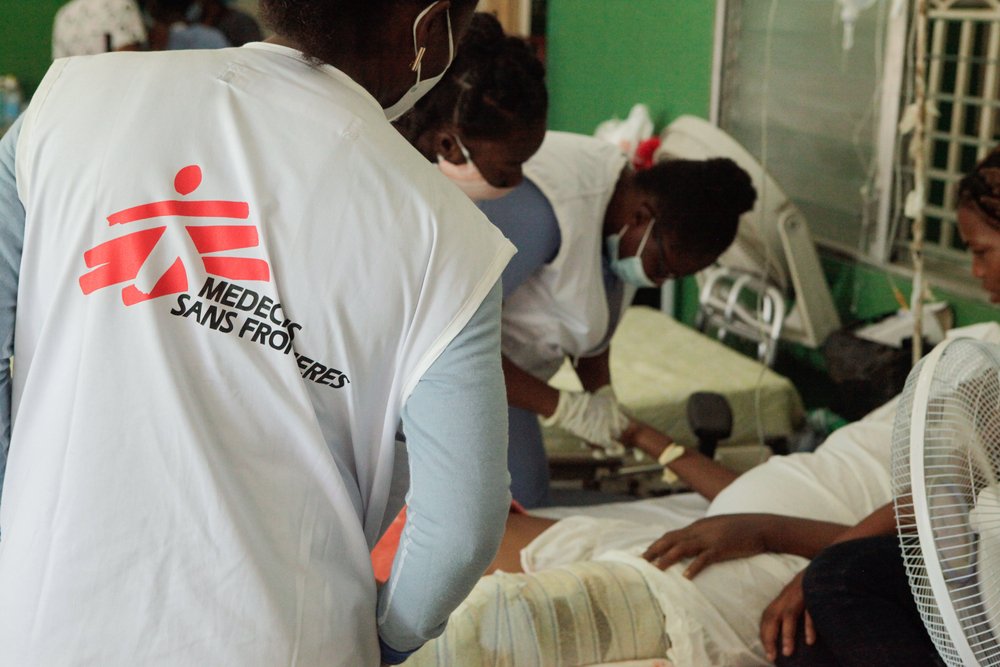 “The hospital was overwhelmed. Children and adults were together. People were arriving at the hospital after several days with infected wounds.”

"As soon as a patient leaves a bed, another patient arrives"

MSF began providing surgical, post-operative and psychosocial care at the hospital and installed seven tents with a total of 62 additional patient beds.

The hospital’s post-operative care room, where Prunau Mimose works, has been full almost continuously since the earthquake.

As soon as a patient leaves a bed, another patient arrives.

Mimose manages the nursing activity and the coming and going of patients.

She praises the local volunteers who have stepped up to work in the hospital as well as the staff. 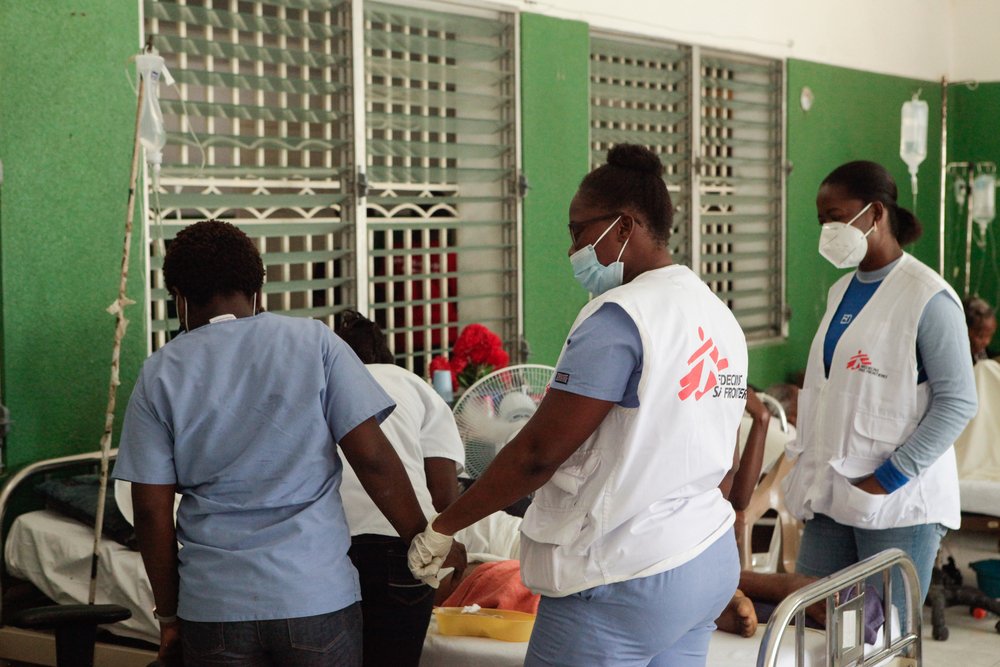 “If it weren’t for the volunteers, our job would be harder,” she says.

A difficult journey to Les Cayes for patients

Many of the patients, especially those in the region’s mountainous countryside, had a difficult, long journey to Les Cayes.

“I was off to tend the cattle when suddenly the earth shook,” recalls Jean Nader Joseph, who goes by Dèdè. 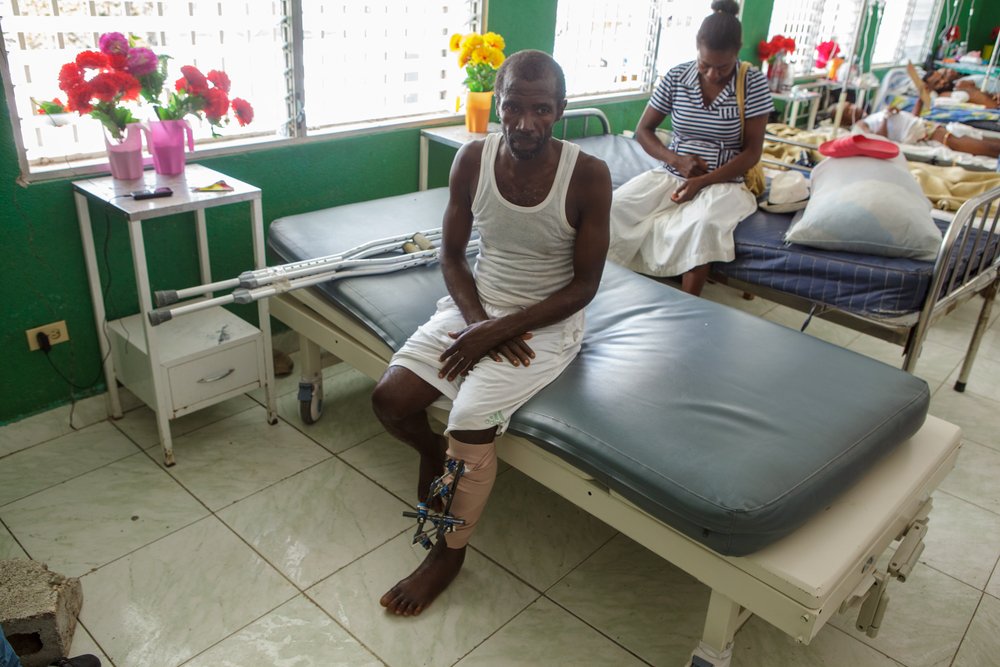 Alexandre Michel/MSF
Jean Nader Joseph, who goes by Dèdè, was injured by a landslide during the August 14 earthquake as he tended cattle in the countryside near Camp Perrin, in Haiti's Sud department.

“I was with a friend, and he was the first to see the landslide. No sooner had he shouted, ‘Dèdè rocks are tumbling toward us!’ when a boulder hit him on the head. He died instantly, and the same boulder struck my leg."

"I spent the night in the bush, and it was not until the next morning that my wife and neighbors came to free me.”

Dèdè says he first sought treatment from a traditional healer for his injuries, but when he learned that the Hôpital Immaculée Conception was providing care for earthquake survivors free of charge, he went there.

After 12 days in the hospital, he had just been discharged and was about to return to his village two hours away in the mountains beyond the town of Camp Perrin.

"Once the acute phase of taking charge of the injured has passed, we have a lot of work to do on post-operative care, in particular to avoid the risk of infection and ensure proper rehabilitation"

But like many trauma patients, he will still need follow-up care. 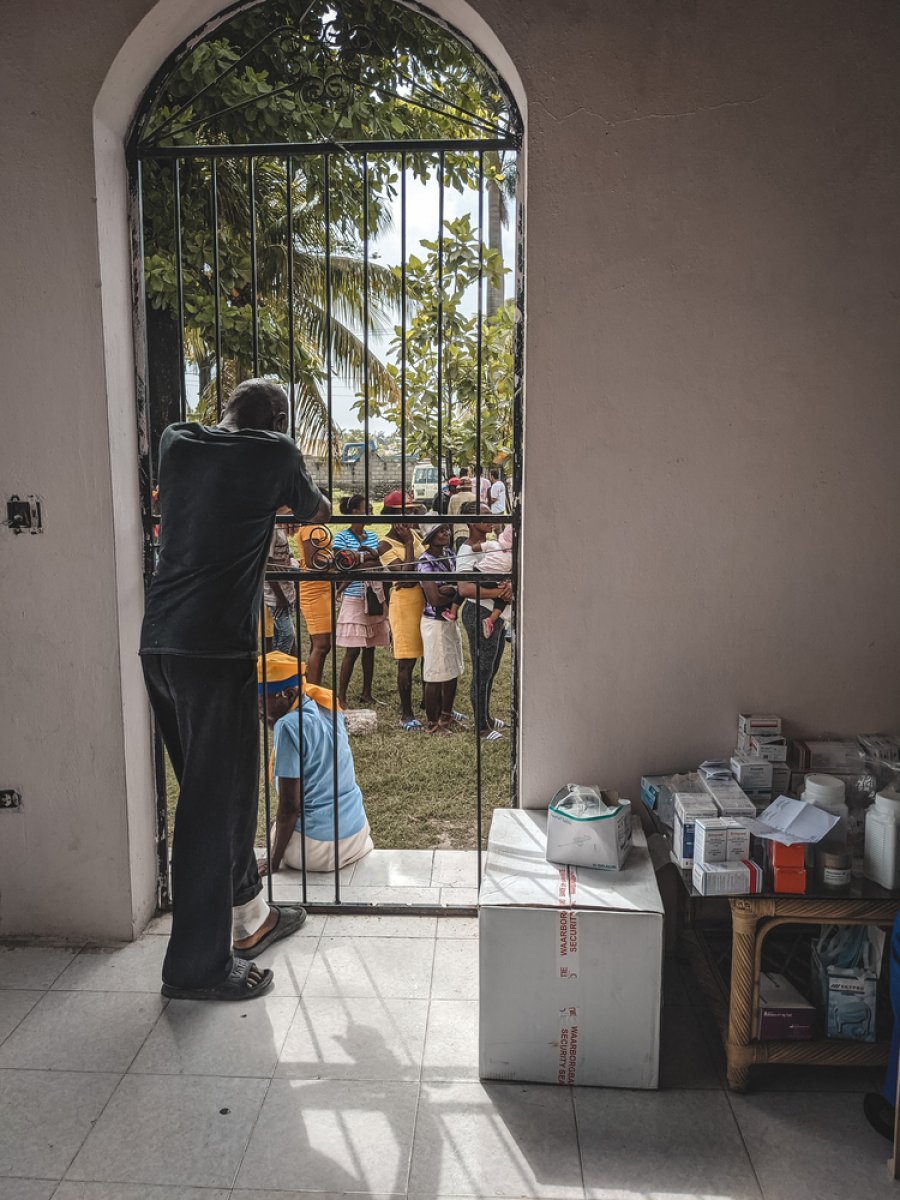 As more patients progress in their treatment, MSF has started providing physiotherapy at the hospital.

"Once the acute phase of taking charge of the injured has passed, we have a lot of work to do on post-operative care, in particular to avoid the risk of infection and ensure proper rehabilitation," explains Carla Melki, MSF emergency coordinator. 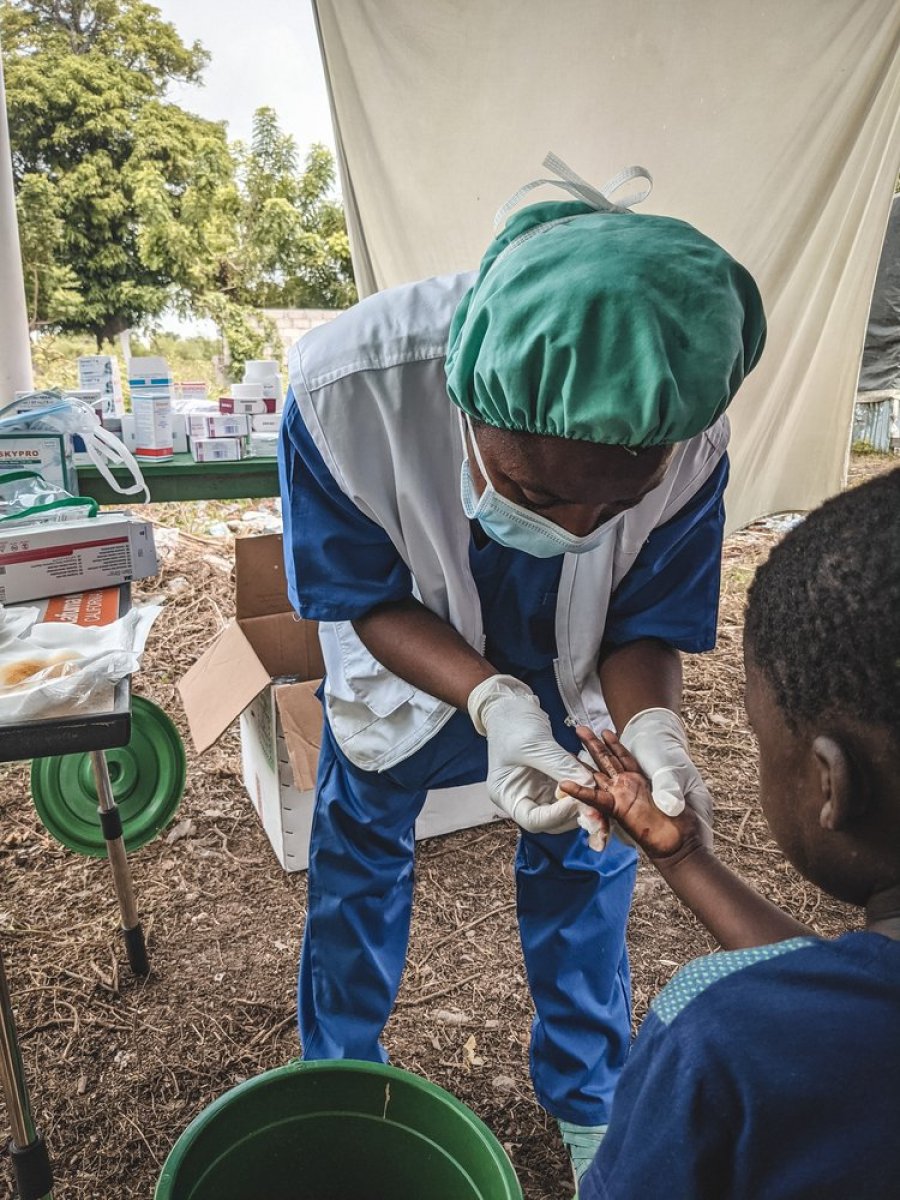 "The idea is to avoid post-operative infections which could have quite serious consequences for their long-term mobility."

Many patients' homes were destroyed, making it more challenging to provide follow-up care once they are discharged.

MSF is working to ensure that discharged patients have shelter, Melki says.

In order to reach patients who cannot make it to Les Cayes on their own, on August 23, MSF began running two to three mobile clinics per day to rural and remote areas severely affected by the earthquake. 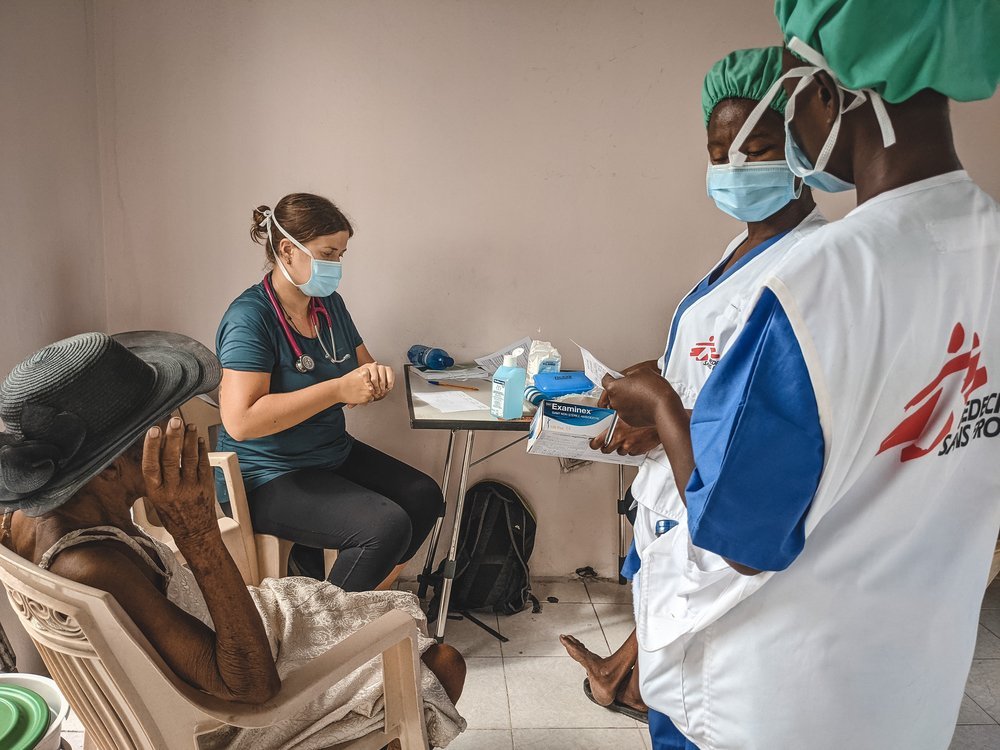 To travel to some areas, the teams must use motorcycles or travel on foot with donkeys to carry their supplies. Other areas are only accessible by air or sea.

“Most areas close to the epicenter, especially near Maniche or Aquin, are difficult to reach,” said Bram Keijzer, medical coordinator for MSF’s emergency project.

“We have made exploratory visits to identify villages where we can provide care. We have also visited camps for displaced people in the center of Les Cayes, some of which have been there since the 2010 earthquake.” 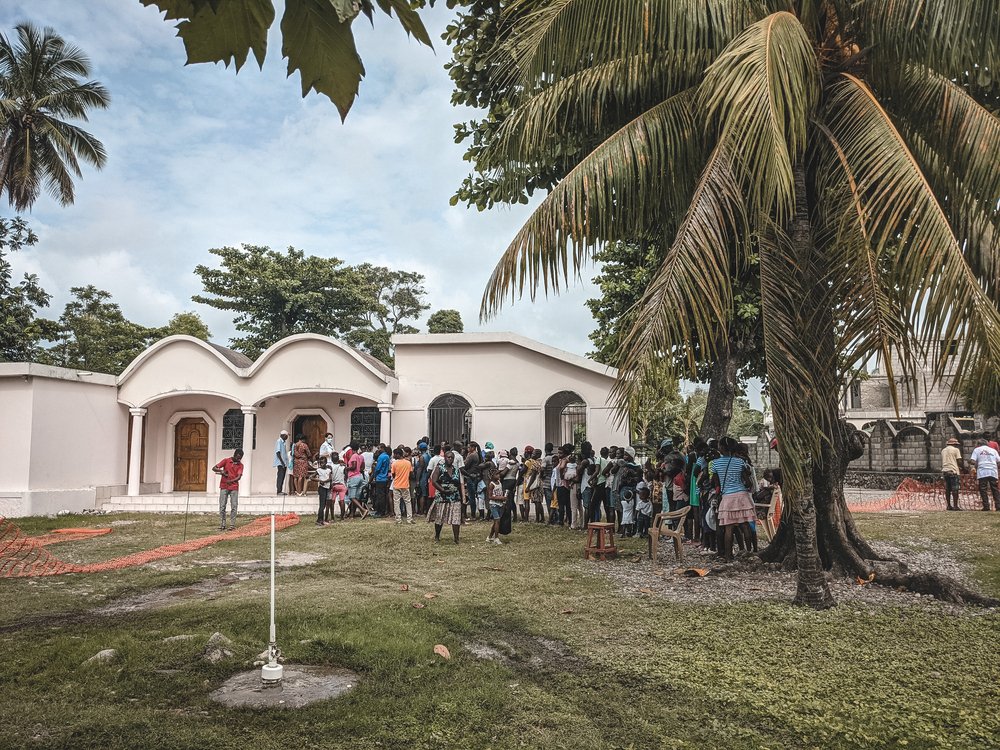 The mobile clinics provide primary and mental health care services, and each clinic can see up to 100 patients a day.

In the first week, the mobile clinics saw nearly 1,000 patients.

Patients in need of specialized care are transported to functioning medical facilities, such as HIC in Les Cayes, when possible. 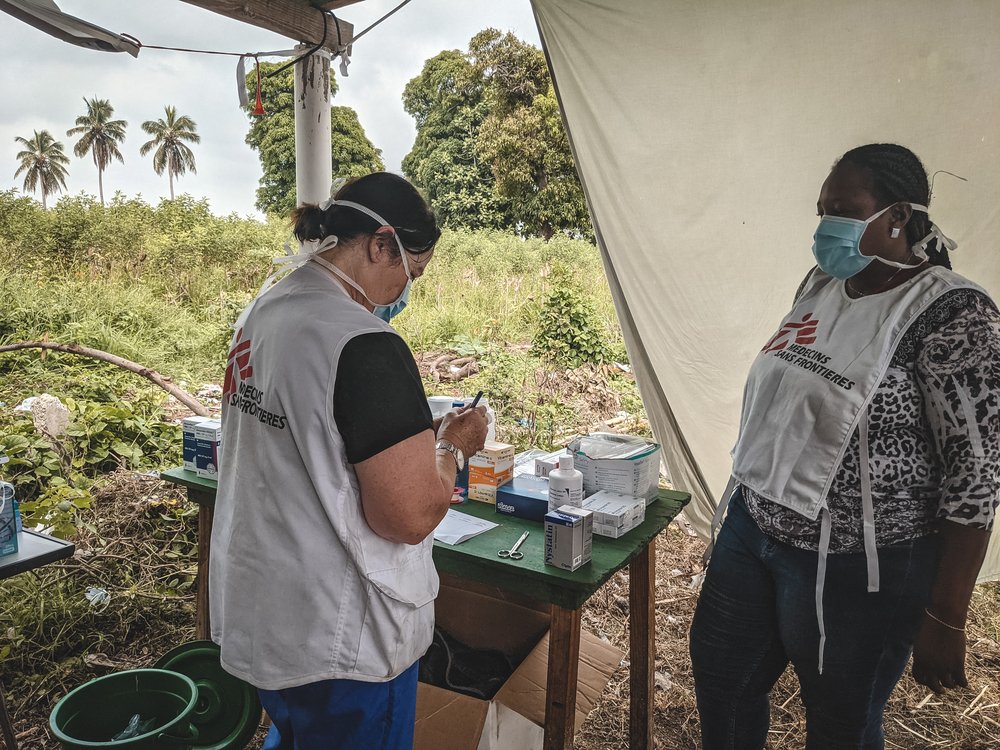 In addition to injuries from the earthquake and related wounds and infections, mobile clinic patients often have respiratory and vaginal infections, skin conditions, signs of malnutrition and other illnesses associated with poor living conditions and a lack of clean water and hygiene facilities.

MSF has also worked, along with other organizations, to improve access to clean water and sanitation in these communities and has supported local health facilities with medical supplies and temporary structures since the earthquake. 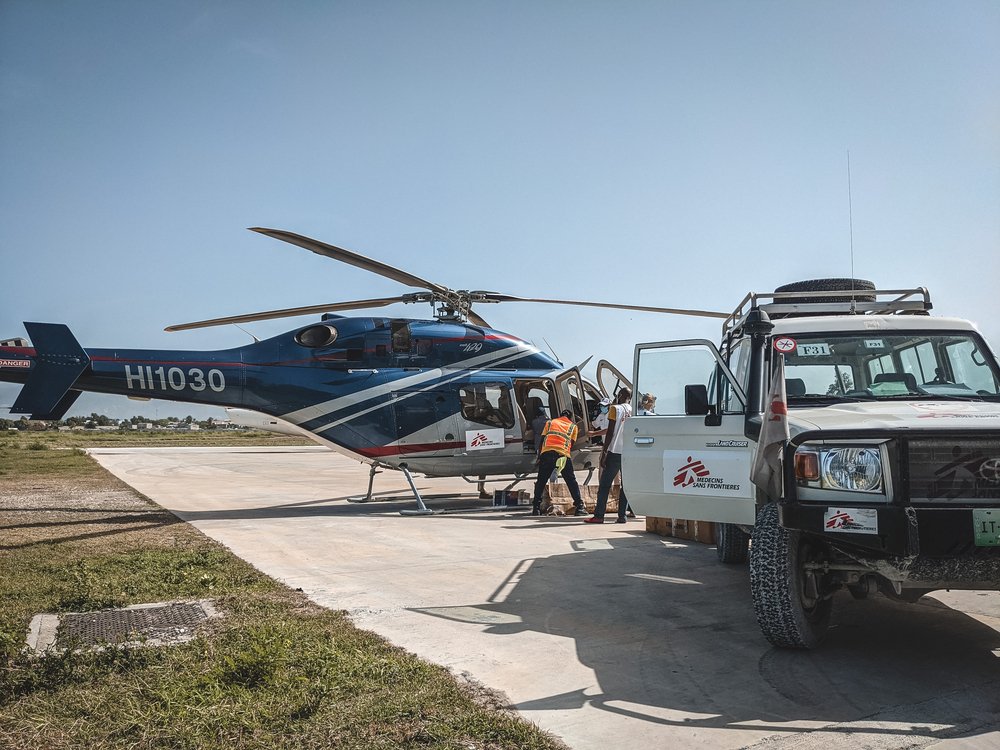 MSF cargo is loaded into a helicopter in Port-au-Prince to be flown to Les Cayes, in the Sud department, where MSF is responding to the earthquake.

Keijzer says his team will continue to seek ways to reach the most remote villages affected by the earthquake.

MSF’s regular project for maternal and sexual and reproductive health care in the Sud town of Port-a-Piment also continues to function, even though the building where MSF has worked for years was severely damaged by the earthquake.