The assassination of President Jovenel Moïse last week brought global attention to the current political turmoil in Haiti, but the country had already been in a state of profound crisis for many months. Stéphane Doyon, MSF Haiti program manager, describes the deterioration in the humanitarian situation and the extraordinary level of violence now occurring.

What is the current situation in Haiti?

To describe everyday life, you have to borrow from the vocabulary of war. The capital Port-au-Prince is divided by several front lines.

Entire neighborhoods are under the control of armed groups with shifting territories.

In dense and impoverished areas, the streets are barricaded, and in some areas there are snipers shooting on sight.

"The UN estimates that 18,000 people are displaced, accommodated either with relatives or in poorly adapted sites, such as schools or churches" 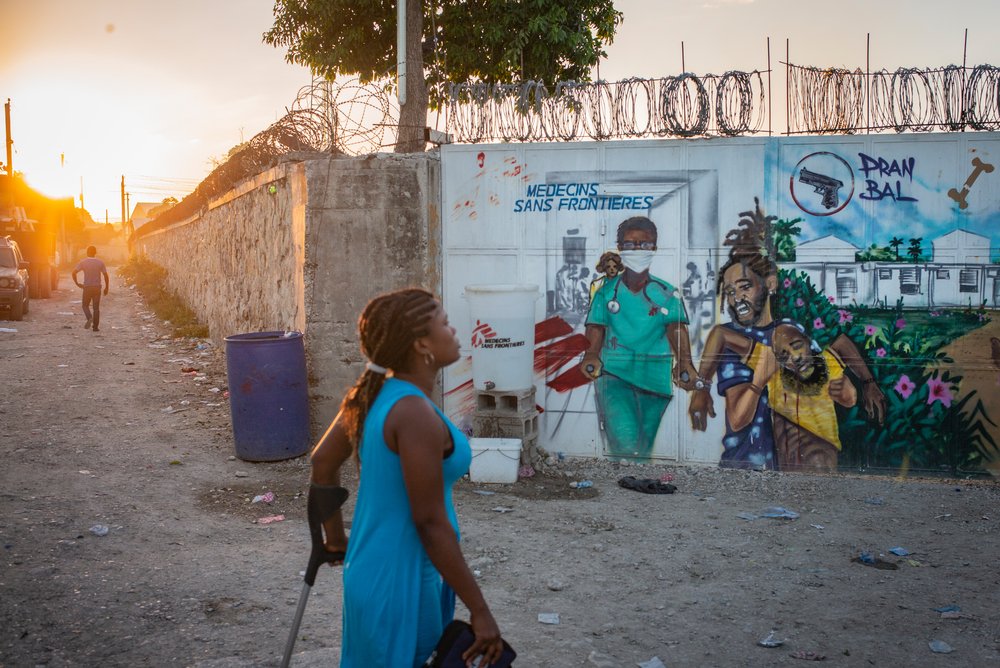 Clashes between gangs have forced thousands of residents to leave some neighborhoods.

In others, such as Cité Soleil, the population finds itself trapped by the fighting.

The UN estimates that 18,000 people are displaced, accommodated either with relatives or in poorly adapted sites, such as schools or churches. 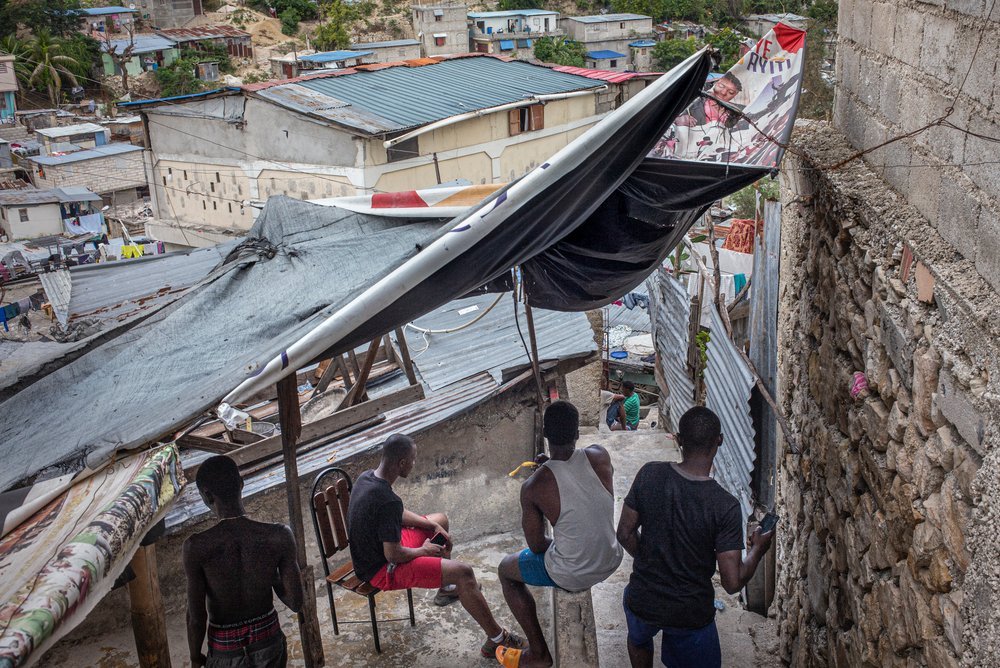 This is a new phenomenon, with the majority of them having fled in recent weeks as the fighting escalates.

The main access routes to Port-au-Prince are controlled by gangs, and entering or leaving the city has become complicated.

In addition to the fighting, there is a very high level of crime, with robberies, kidnappings and extortion.

In this context, there are many victims of violence, especially injured people.

In our trauma hospital in Tabarre, MSF has provided care to more than 600 people wounded since the beginning of the year, the majority of whom are from the districts of Martissant, Cité Soleil, Croix des Bouquets or Bel Air, which is the site of particularly severe armed clashes. 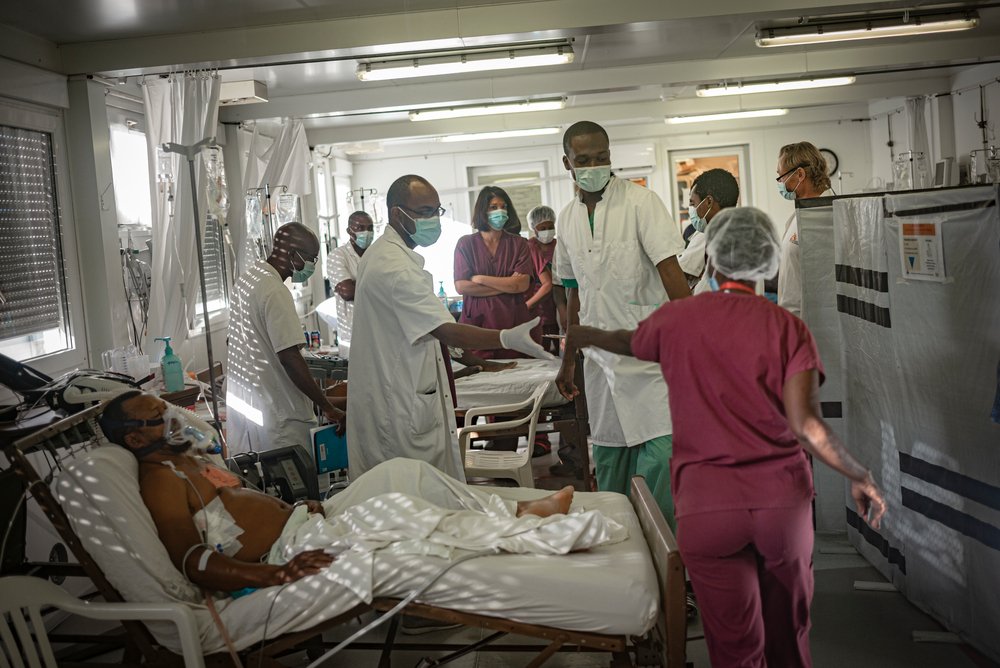 Guillaume Binet/MYOP
Intensive Care Unit of Tabarre’s hospital in Port-au-Prince, Haiti. Every morning the medical team of the hospital makes its morning rounds, as the overnight team hands over care of the patients.

Since April, we have had to deal with several waves of injuries, which have prompted us to increase our hospitalization capacity.

"On average, more than 60 percent of our trauma patients are victims of gunshot wounds or stab wounds"

There have been days when our teams have received as many as 20 patients. 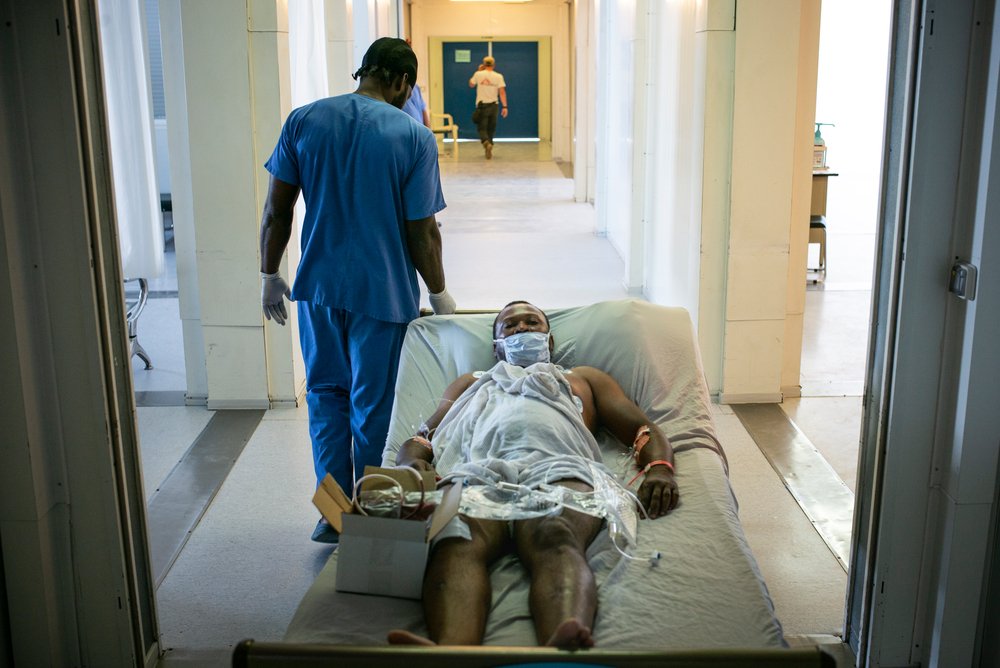 Guillaume Binet/MYOP
A man with a gunshot wound has his chest x-rayed and is going to intensive care unit.

On average, more than 60 percent of our trauma patients are victims of gunshot wounds or stab wounds.

Separately, MSF continues to treat victims of sexual and gender-based violence in Port-au-Prince and Gonaïves. 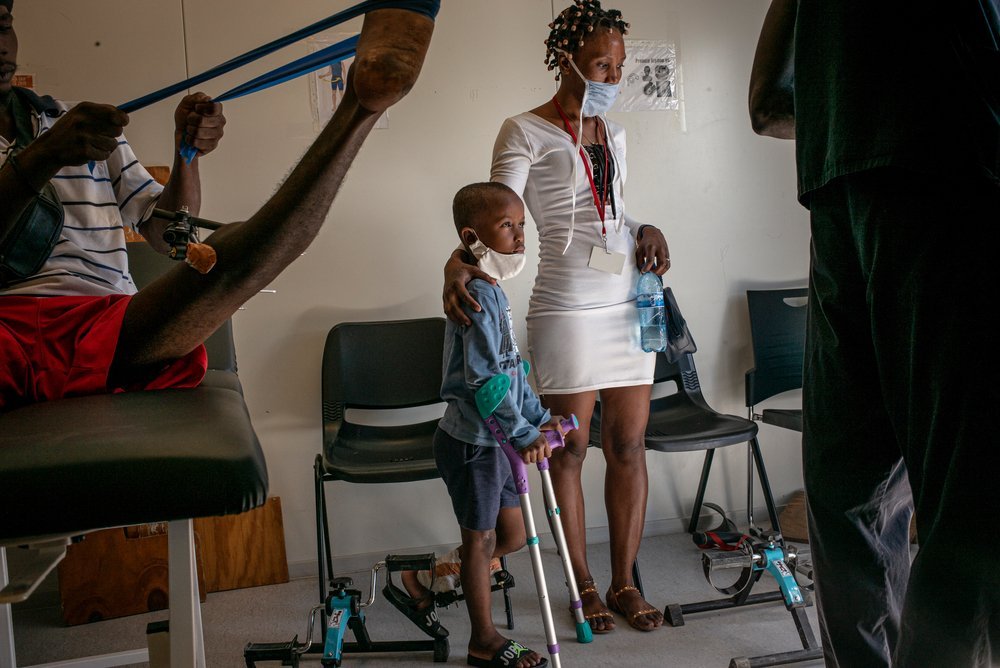 Physiotherapy room. The patients are mainly collateral victims of gang war or injured by car accident.

How are MSF's activities affected by the situation?

While Haiti has been plagued by chronic violence for years, the situation has gradually deteriorated for over a year.

Health facilities are no longer spared and our medical activities have been disrupted by a succession of critical incidents. 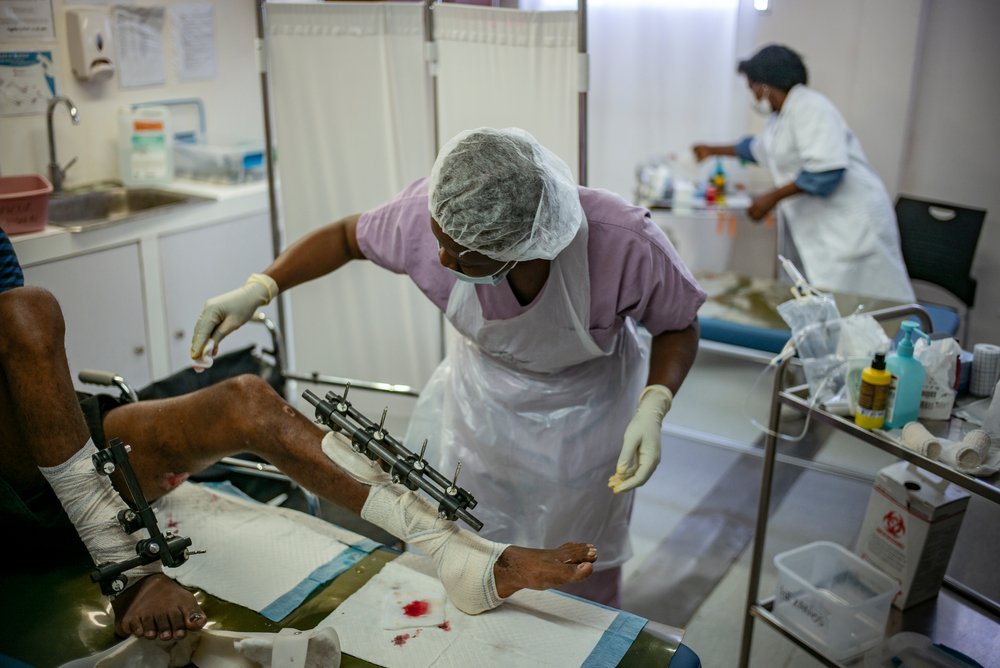 In February, an MSF hospital dedicated to treating severe burns in the Drouillard district had to be closed because the site was literally surrounded by fighting.

The 20 or so patients still in hospital had to be transferred, and the hospital has yet to reopen.

We just maintained an advanced medical post there to be able to stabilize and refer the wounded or victims of burns.

Last month, an explosion of violence in the Martissant neighborhood put the staff of the MSF emergency center, suddenly on the front line, to the test. 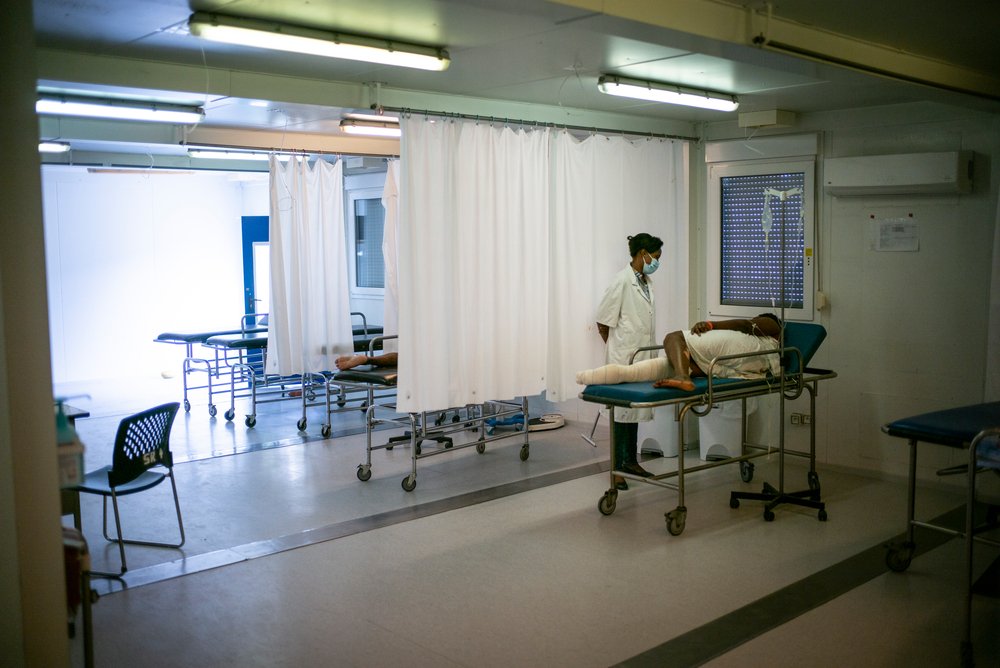 For several days, the medical staff had to take care of the wounded while protecting themselves from stray bullets, and one of our ambulances was robbed.

On June 26, the structure was the target of direct fire, and was finally evacuated so as not to further expose patients and staff.

Beyond these extreme episodes, it is ordinary violence that threatens everyone. 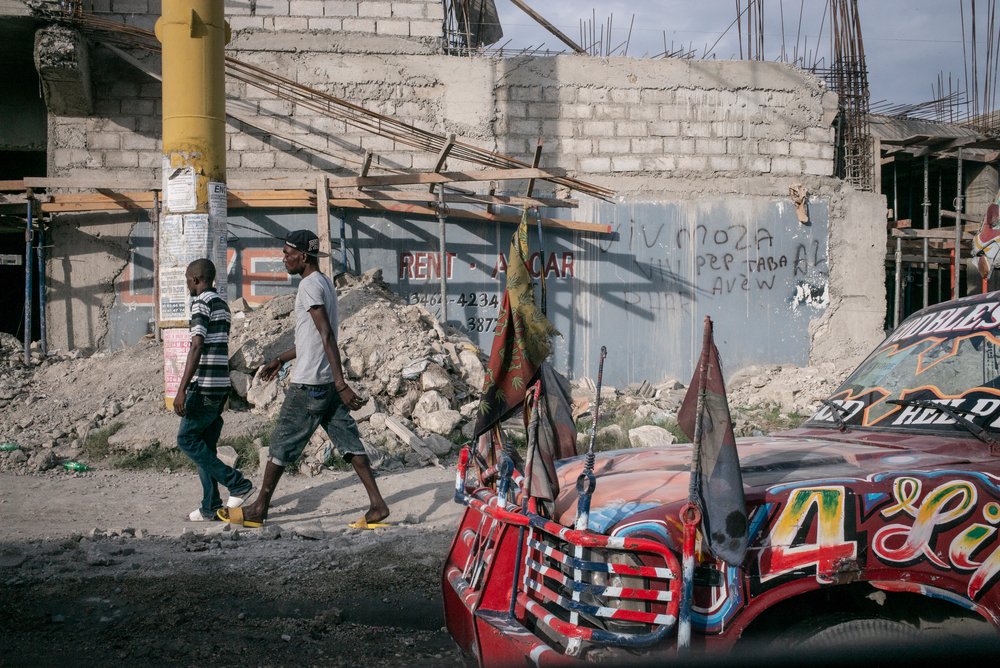 Guillaume Binet/MYOP
Outside in the streets of Port-au-Prince on the way to the MSF Tabarre hospital, the roads are full of colorful “tap-tap” – the collective taxis used in Haiti.

When we go out into the streets, our health workers, like the population, live in fear of stray bullets or robberies.

An MSF employee who worked in Tabarre was murdered on May 25 by armed men after he had finished his day at the hospital and was on his way home.

What are the effects on the health care system?

This permanent state of insecurity limits the population's access to health care.

The health care system is already extremely unequal, with private health care available only to those who can afford it, while public health facilities lack essential resources.

In this context, it is a challenge to maintain medical activities. 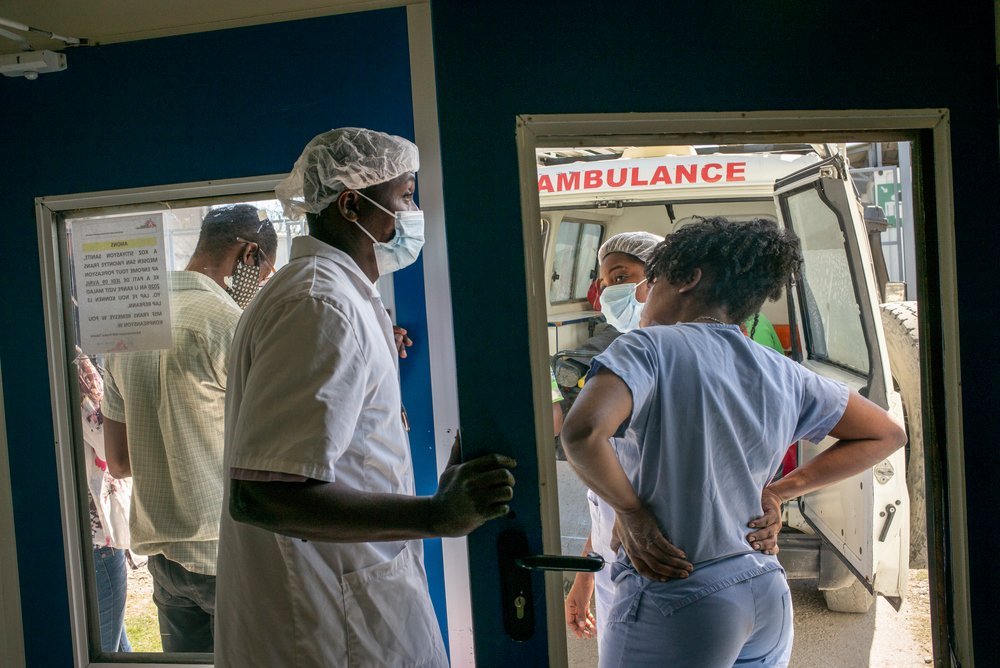 Staff and patients must be able to reach health facilities and return from them safely, but there is no guarantee that they can.

At a time when MSF should expand its activities to meet the growing medical needs of the population, including from an increase in COVID-19 cases, we are struggling to keep our facilities open.

Today, it is urgent to realize that Haiti is plunged into a situation of violence and total insecurity coupled with a major health crisis.

The assassination of the President adds uncertainty in a country that appears to be on the verge of chaos.