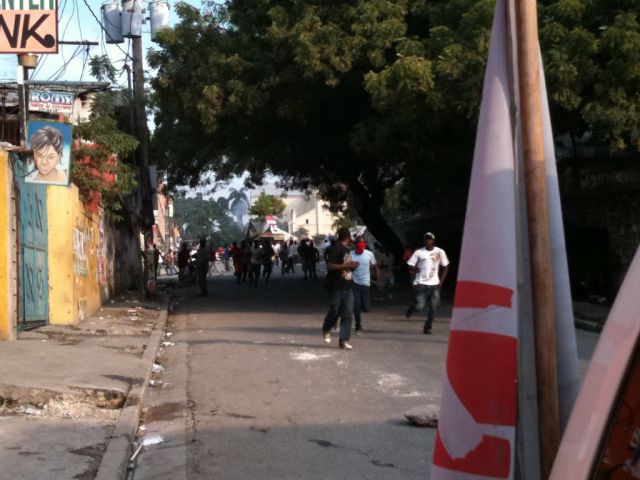 Since the start of demonstrations in Port-au-Prince on Tuesday, 7th December, MSF has treated 26 injured patients, 15 of whom had bullet wounds. Two MSF ambulances continue to travel the city’s streets, picking up the wounded and those in need of emergency medical care.

Before the violence broke out, MSF had stored surgical supplies and set up medical teams in six of the capital city’s medical facilities (Martissant, Bicentenaire, Hôpital Français, Saint-Louis, Sarthe and Choscal) in the event that wounded persons might seek care. A small, five-bed emergency unit was also set up under a tent at one of MSF’s offices in the neighborhood of Pétionville.

Demonstrations and barricades erected at various locations in Port-au-Prince severely restricted travel. MSF teams have had to limit their movements, but are still managing to provide medical care, including responding to the cholera epidemic and treating persons wounded in the violence.

"MSF vehicles are among the only ones moving around within the city," says Francisco Otero, MSF's head of mission. "Most of the time, the demonstrators open the barricades to allow our ambulances to pass through. This is critical to ensure transfers of seriously-ill patients and the continuation of our medical activities."The MSF teams have broadcast radio messages asking the population to allow the ambulances to travel freely and informing listeners that treatment is available at MSF facilities. Individuals who urgently require hospitalisation or patients with severe cholera can thus continue to be transferred to MSF treatment centres.

Despite the unrest, MSF's seven hospitals, one stabilisation centre and 40 cholera treatment centres across the country have provided uninterrupted service. In Port-au-Prince, MSF has not yet observed a significant reduction in the number of admissions to its centres.

However, in Cap Haitien, in the north, many patients have been unable to come to the city for treatment because of insecurity. As a result, MSF’s cholera treatment unit in Fort-Saint-Michel, not far away, was overwhelmed by the arrival of 200 patients, while capacity is limited to 50 beds.

"The primary problem is organising shifts with a reduced number of medical staff, while ensuring appropriate care," explains Sergio Cabral, a doctor at the Sarthe cholera treatment centre, in Port-au-Prince.

Between 22nd October and 5th December, MSF treated more than 51,000 people with cholera symptoms in Haiti.