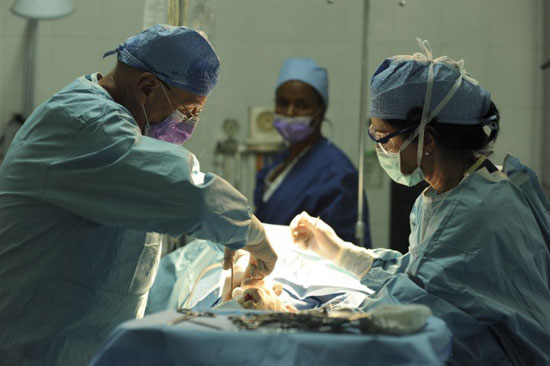 On the fifth day on their response to the disaster in Haiti, the MSF teams remain focused on trying to cope with the huge demand for life-saving surgery from those who suffered terrible injuries in the quake. They are doing that by stretching their existing resources, running operating theatres to the limit by working around the clock, while at the same time trying to create more capacity by finding new premises and transporting in mobile structures.

In the newly working hospital in the Carrefour district, the MSF surgical team carried out 90 operations within 24 hours of getting the theatre usable. And that was only two hours after they found the hospital. The surgical team at Choscal hospital also completed around 90 operations so far. Another team is working from a container and carried out twenty. More capacity is on its way, but the twin theatre inflatable hospital has been delayed because one of the planes it was on did not get permission to land at Port au Prince airport and was re-routed to the Dominican Republic. The other half of the hospital did arrive today but MSF is still concerned that vital supplies are being held up.

The conditions in towns outside of the capital, some of which were even closer to the epicenter of the earthquake are becoming clearer. An MSF team plans to go today by helicopter to the town of Jacmel, on the southern coast of the island. Others have been to assess the needs in Léogâne, about an hour outside of Port au Prince. In Saint Marc, an area less damaged by the quake where thousands of people from the city have fled, there are hundreds of injured in the hospital.

Despite the transport problems, MSF has managed to get in over a hundred extra international staff to help the teams who were working in Haiti before the earthquake. The specialists include surgeons, aneasthetists, nephrologists and psychologists. Many of these have had to come by road from the airport in the Dominican Republic but MSF has managed to get four cargo planes into Port au Prince since last Wednesday with staff and tons of relief material.

The teams on the ground say that conditions are certainly not improving yet for the sometimes desperate people on the streets. The lack of food and clean water is causing further stress.

MSF is continuing to try to get a full account of our Haitian staff. We know that some have not survived the quake but communications remain difficult and we have not yet been able to trace all our colleagues.