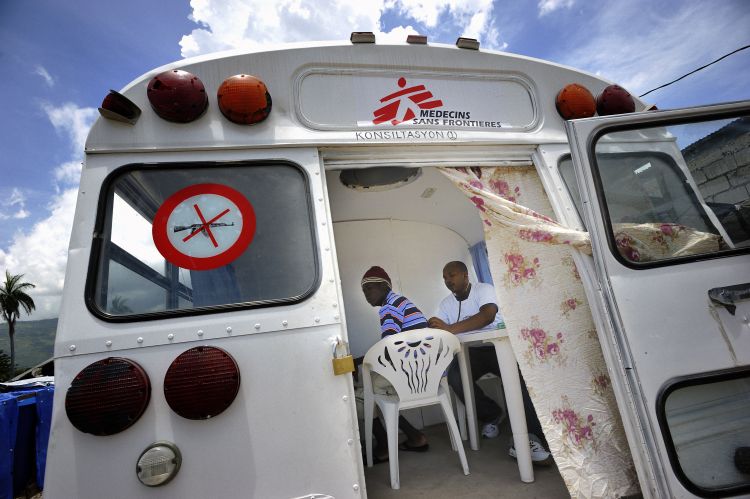 Six months after the January 12 earthquake in Haiti, the international medical humanitarian organisation Médecins Sans Frontières/Doctors Without Borders (MSF) publishes today a report describing the organisation’s largest ever emergency response. The report also describes the dire living conditions of Haitians today and provides an explanation of MSF’s commitment in years to come.

© Kadir van Lohuizen / NOOR.  MSF's mobile clinic in 'Aviation camp'. It is one of the biggest camps in Port au Prince with about 50,000 people.

MSF’s medical work in Haiti has evolved during the past six months, from an emergency response to a wider range of medical and relief activities. “Haitians were the first to respond to this disaster and we have reinforced their effort with a massive aid intervention. Today, medical provision for Haitians has improved, and is certainly more accessible than before the earthquake, allowing poor people to receive proper health care,” explains MSF Head of Mission Stefano Zannini, who was already in Port-au-Prince when the earthquake killed or injured hundreds of thousands and left over a million people without shelter.

However, the situation for many Haitians is still hugely precarious, while frustration grows among people who are disappointed with the pace of rehabilitation. “There is a staggering gap between the enthusiasm and promises for aiding the victims of the earthquake in the early weeks, and the dire reality on the ground after half a year,” adds Zannini.

MSF’s report publishes figures on the scale of its relief intervention. Up to May 31, in the first 138 days following the disaster, MSF staff treated more than 173,000 people and performed over 11,000 surgical procedures. More than 81,000 Haitians received support to help them cope with their psychological trauma. MSF brought in almost 27,000 tents and distributed more than 35,000 relief kits.

In the report, MSF describes some of the choices which had to be made in the first few weeks following the earthquake. For example, the extremely high number of injuries forced teams to focus almost exclusively on the stabilisation of patients and emergency surgery, at the expense of other crucial activities. Finding locations for temporary medical facilities was done in haste as there was little time for more in-depth assessments.

An extraordinary number of foreign aid workers had to be brought into the country quickly – two months after the earthquake MSF had over 350 international staff on the ground - as many Haitian health workers themselves were also victims of the earthquake. This put a huge strain on the human resources and management capacity of MSF. MSF was eventually able to reduce the number of foreign workers, as more Haitians were hired to work in MSF facilities. By the end of May, 93 per cent of MSF staff on the ground were Haitians.

MSF also reports that, up to 31 May, around 91 million euros were received in donations from the public earmarked for Haiti relief. The organisation spent 53 million euros by that same date, including more than 11 million on surgery, 4 million on maternal health (MSF helped deliver 3,700 babies) and over 8.5 million on providing shelter. MSF foresees that, by the end of the year, it will have spent around 89 million euros on assistance to the Haitian population.

Although there are uncertainties around the speed of reconstruction and the extent to which other organisations will still provide health care, MSF commits to continue working for the victims of the earthquake in years to come. “Health care was already fragile in Haiti before January 12,” says Dr Unni Karunakara, the International President of MSF. “The earthquake destroyed much of the medical services that were available. It will take many years before the country is back on its feet. MSF is determined to play our part in rebuilding health care for Haitians and will dedicate our staff and means to this task as required.”

Download the full report  “Emergency response after the Haiti earthquake”.

© Francois Servranckx / MSF.  A child recovers in the MSF orthopaedic hospital in Carrefour.