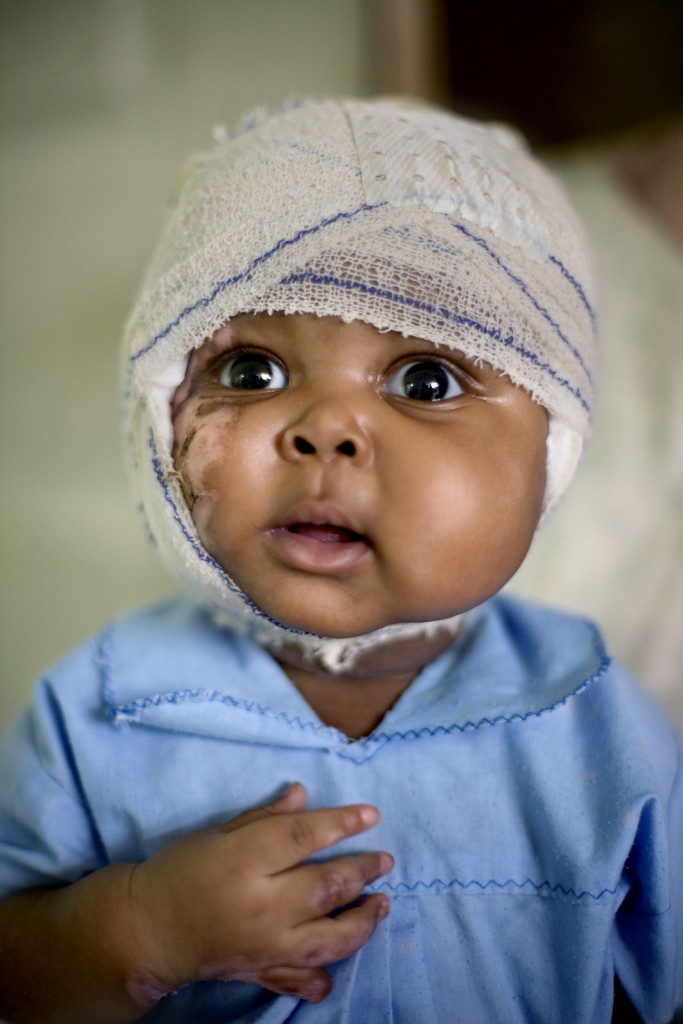 Four months after Haiti's devastating earthquake, the MSF teams continue to adjust their activities to meet the changing, but still major, medical needs. MSF provides primary and secondary care to the population at no cost, working out of approximately 20 sites and operating several mobile clinics.

"More than one million people are still living in deplorable conditions, beneath tents or plastic sheeting, without a clear sense of what's ahead in the coming months," says Stefano Zannini, MSF Head of mission in Haiti. "In the meantime, the rains are intensifying, flooding the sites where earthquake victims live several times a week."

These conditions produce heightened health risks. Since the 12th of January, MSF has provided medical care to 137,000 patients. Diseases currently treated in primary healthcare facilities include respiratory and waterborne illnesses, such as malaria and diarrhoea. Since late March, MSF has treated 71 suspected cases of typhoid fever at Choscal Hospital - a disease linked to poor hygiene conditions.

In a country where 60 percent of the medical facilities were either destroyed or suffered serious damage, MSF is working to meet second-line medical needs by managing or supporting hospitals and specialised medical facilities. "There are patients who were wounded during the earthquake and need orthopaedic and revision surgery, but everyday medical needs – such as automobile accidents and domestic accidents – are increasing in importance," explains Dr. John Pratt, who is currently working at the Saint-Louis MSF Hospital in Port-au-Prince.

Treating obstetric cases is also a priority. In April, 635 complicated deliveries, including 131 caesarean births, were performed at the Isaie Jeanty medical centre in Port-au-Prince. In Léogâne, MSF performed 514 surgeries - most of them obstetric

MSF has also set up Haiti’s only specialised department for severe burn victims, at the Saint-Louis Hospital. The unit includes three tents and 27 beds for severe burn patients, both children and adults. Most are children, burned during household accidents that occurred in the makeshift shelters that often house large families.

Three specialised MSF facilities continue to provide functional rehabilitation therapy, including physical therapy, psychological assistance and other follow-up services. Post-operative care, both in-patient and out-patient, is also provided by other facilities managed or supported by MSF in Haiti. Over the last four months, MSF has provided post-operative care to over 14,600 patients.

MSF psychologists have treated 69,000 earthquake victims, both at MSF medical facilities and in camps. "Four months after the earthquake, many Haitians still feel the earth move and the noise is ever-present," says MSF psychiatrist, Dr. Maryvonne Bargues. "We see many people who are experiencing an onset of acute psychosis. There is a collective depression behind the smiles that pre-earthquake Port-au-Prince evokes. People know that the unsettled nature of their lives will not be resolved for a long time. They are discouraged, but not resigned."

In April, MSF treated 81 victims of sexual violence in its Port-au-Prince facilities. Care includes psychological and medical assistance, including vaccination against Hepatitis B and HIV/AIDS preventive treatment.

Orthopedic surgeon Dr. Alvise Pasquini looks over Robenson Guerville's x-rays in a tent just outside the new MSF hospital which is housed inside a former Coca-Cola bottling plant

With the arrival of the rainy season - and in August-September, the hurricane season - MSF is gradually shifting its medical activities from tents to permanent or semi-permanent structures. In Léogâne, for example, construction of a 120-bed hospital, built out of containers, began in early May to replace the hospital destroyed by the earthquake. In Jacmel, where the hospital was largely destroyed, the surgery, maternity, internal medicine and paediatric departments have now been converted into a semi-permanent structure. Extensive rehabilitation work has also been performed at public medical facilities supported by MSF.

Some areas outside of Port-au-Prince were not as affected by the earthquake, but experienced an influx of several hundred thousand people who fled the capital. To evaluate the situation and the medical needs, an MSF team went to several towns, including Gonaives, Port-de-Paix, Cap Haitien, Fort-Liberté, Saint-Marc and Les Cayes. These regions do not have earthquake-related needs, but access to healthcare in rural areas remains limited. After a more detailed analysis of the results of these evaluations, MSF may decide to expand its activities in some areas.

Finally, three months prior to hurricane season, MSF is preparing to meet a possible increase in medical needs and emergency treatment, both in Port-au-Prince and throughout the country. Additional medical and logistical supplies have been ordered and will be available in the coming weeks, based on the needs that may arise.