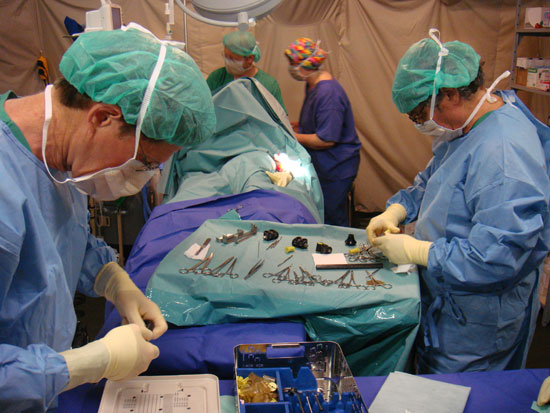 Haiti update: Day 16 and the range of MSF's work is increasing

The range of work that MSF is now carrying out in Haiti with the survivors of the earthquake has been increasing as the needs and priorities shift but the core medical services in hospitals and clinics still dominate.  Examples of those come from projects in Port-au-Prince, where the teams are working in rather different surroundings.

In what is known as "New Carrefour Hospital", surgeons performed 40 operations yesterday. They are working in two school buildings that survived the quake because the original hospital next door was finally made unsafe by aftershocks. In the neighbourhood of Carrefour Feuille, a small team of two nurses, a doctor and an obstetrics specialist are running a clinic from a tent in an area where 9,000 people have now made temporary homes. They are still seeing people with injuries from the quake coming for help but also increasing numbers with diarrhoea and fever.

The successful creation of more medical facilities has seen new developments in the capital and outside. A post operative "village" has been assembled in tents in an area called Delmas 30. Patients will be taken there from other MSF hospitals to recover from their operations. This kind of care is one of the greatest needs in Haiti at the moment, as Brigg Reilley, an MSF epidemiologist in who is there to analyse health requirements explains.

"The most serious cases are going to continually need dressing and regular cleaning, all part of a very nursing-intensive process. We're eventually going to need skin grafts and prosthetics. These will be needed not only in the next days, but in the coming weeks, months and beyond. Even after the current media spotlight on Haiti fades, there will be patients with extensive orthopaedic needs as a result of the earthquake."

A similar provision is now available in what was kindergarden "Mickey", which is now a 60-bed facility but has the potential for 180, and in Bicentenaire, a former private clinic, there are another 30 beds. In a secondary school in the Champs Mars area, a clinic has opened which will soon provide in-patient facilities as well. Outside Port-au-Prince, in the town of Jacmel which was hit especially hard by the quake, MSF is now working with the local hospital to provide care in their building and in tents surrounding it.

One of the other expanding areas of work has been in water provision. MSF now has the material and specialist staff in Haiti to start helping some of the communities in the areas where we have medical services. A new clinic has opened in Grace Village and the team are also taking responsibility for supplying water to the 15,000 people in the area. Near the Chancerelle Hospital, MSF is using water bladders to supply a community that is camped in the open. A similar project is underway near kindergarden Mickey.