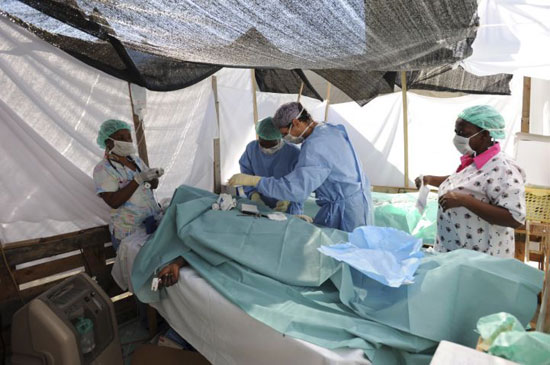 Eight days on, the situation in Haiti remains extremely serious, with fears of supply shortages and aftershocks. Although aid is beginning to be delivered, bottlenecks remain, and people are starting to die of sepsis from infections that go untreated. There is also increasing evidence of widespread psychological trauma in the population.

Loris De Filippi, the coordinator for MSF's work in Choscal hospital in Cite Soleil says the position there and at other locations is problematic. "It's the most difficult part of our job. Every time we go out of the operating theatre we see faces imploring us for treatment. And they are begging us there in front of the hospital. What we are trying to do is to expand our capacity to answer these calls. But we need supplies to get to the airport - and we don't know why the planes are being re-directed."

MSF operations
MSF's wards and operating theatres in and around Port-au-Prince are increasingly concerned about supply problems. Drugs for surgical care and equipment like dialysis machines are urgently needed. Work has begun in Port-au-Prince to assemble MSF's inflatable hospital, which provides two operating theatres. However, other supplies were delayed when planes transporting 12 tons of cargo from the Dominican Republic to Port-au-Prince were turned back three times.

Two operating theatres are running at the Trinite hospital, one in a shipping container. Teams doing an average of 25 surgeries a day. On Monday, 65 people were hospitalised and 14 surgeries were carried out. A triage area and a post-op 'ward' has been set up in front of the building. Most cases are complicated, with multiple fractures, crushed bones, head and facial injuries and infected wounds being especially comm

In Carrefour hospital, where again the medical staff are facing very difficult conditions, Paul McMaster, a British MSF surgeon, says that the needs are all too obvious. "We've not been able to get the equipment we need in the hospital because of these delivery problems. We're running out. On Saturday we didn't have one of our anaesthetics. We've run out of plaster of Paris for fractures and we've no crepe bandages at the moment."

Another of MSF's hospitals in Martissant has treated over 1,500 patients since the earthquake and 120 people remain hospitalised, 20 of them burns cases. MSF now has six other locations where it is dealing with a similar variety of earthquake injuries.

One of the hardest hit towns outside Port-au-Prince, Leogane, is also a new centre for MSF's work. An MSF team is supporting a nursing school there where staff was providing basic care. In Jacmel, another heavily hit town, another MSF team has started performing surgery in the hospital's operating theatre.