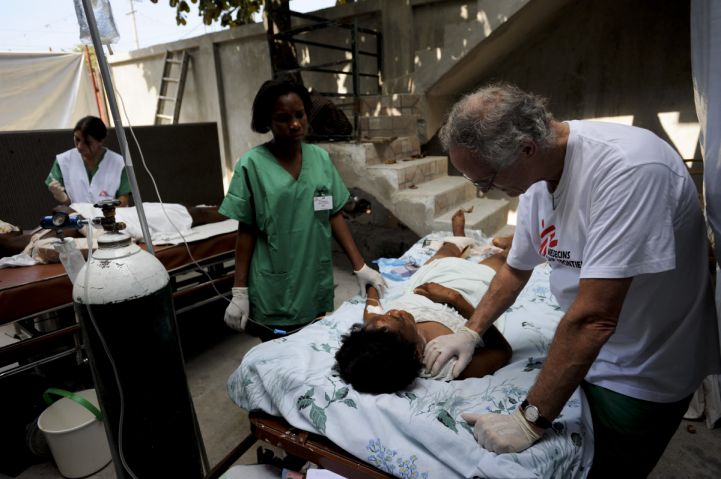 Six days after the earthquake, international support is slowly appearing in Port-au-Prince and Haiti, but most of the needs are far from being covered. Even the most serious cases can hardly be taken care of due to lack of structures offering good surgical conditions. Some markets have reopened, but food and water remain an issue. Aftershocks and people leaving buildings in a rush are still daily scenes. The population is getting frustrated, and tension is on the rise.

Assistance is definitely lacking or has difficulties to get organised. Many areas have not been explored in Port au Prince and the South of the country. Needs such for orphans or paralysed people are not covered, and might not be before a while. The airport remains an issue lacking fuel and space. Many planes are rerouted to the Dominican Republic instead, delaying even more the much needed assistance.

Teams are scaling up activities in Port-au-Prince to restore and increase the surgical capacity we had before the earthquake. 150 expatriates have joined their Haitian colleagues since Wednesday morning. Yesterday a 23-year-old man, was rescued from under the collapsed Trinite hospital five days after the quake struck, thanks to the support of Peruvian, Venezuelan and American volunteers. He is safe and his life is not in danger. The man was hospitalised since Saturday when the building collapsed. Exploratory missions were carried out in Leoganes, Grand Goave, Petit Goave, St Marc and Jacmel.

At Trinite hospital, two operating theatres are now running (one in a shipping container). Since Wednesday, teams have provided first aid care and done an average of 25 surgeries a day (C-section, amputation, laporatomy, debridement). Forty patients are hospitalised. It remains difficult to know how many patients were treated since the beginning as there was no register the first days. The addition of the second operating theatre should help the surgical team to work more efficiently and handle priorities and do an additional 20 surgeries per day. Today a triage area and a “ward” for post-operative patients were set up in front of the building in the street. In the Pacot rehabilitation centre, where a new surgical team arrived to relieve the permanent team, 160 patients are hospitalised and transfers have started to Trinite hospital.

Othere teams have treated more than 1,000 patients in Martissant since the quake and more than 350 in the office. Some 150 patients have been hospitalised in Martissant. More than 500 patients in need of surgery have been transferred from Martissant to Choscal Hospital in Cite Soleil. Teams are focusing on life-saving surgery (open wounds, fractures, burns, amputations, emergency obstetrics). They’ve been working 24/24 and have done more than 90 surgeries since the operating theatres started functioning. Priority is given to life-saving interventions, such as amputations in patients with gangrene triggered by infected wounds.

Another team took over the Carrefour hospital in the south west of the city and started treating patients, mostly doing surgeries. This was one of the hardest hit areas and getting around remains difficult. They hope to be able to keep the hospital running on a 24/7 basis. 500 patients were treated in Carrafour in the first 24 hours, with 90 critical surgeries, including amputations, burns and fractures. 2 ceaseran sections and 6 complicated deliveries have also been performed.

One full charter did land this morning in Port-au-Prince with the second part of the hospital. The first part of the cargo, rerouted yesterday to the Dominican Republic is on its way to Port-au-Prince. A field has been identified to hold the new 100 bed hospital.
Assessing new areas

MSF has also visited Leogane, one of the hardest hit areas, that was 80 percent destroyed. Support is being given to a nursing school clinic with emergency care and a search is on for more locations to support ongoing medical activities.

Teams have also been assessing the needs in Jacmel and Saint-Marc, areas affected outside Port-au-Prince.