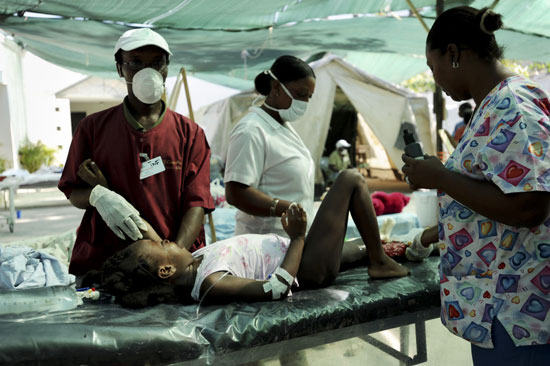 The core medical activities in Haiti are still concentrated on treating people who were injured in the quake, with surgery continuing and post operative care expanding. But as Rosa Crestani, one of MSF's emergency medical coordinators explains, there is a second phase underway, in which the operating table is still central.

"While we have done life-saving interventions so far, we need now to be able to do more limb-saving interventions. That means operating on people with wounds that are getting infected and which may infect the entire limb in a few days, unless they undergo surgery. To deal with the demand, we are opening a third operating theatre in Choscal and still working them around the clock. MSF has also started running mobile clinics to search for people who need urgent care, but who have been unable to get any yet."]

Young patient with wounded leg gets her bandage changed.  Jan 2010.

At the Port-au-Prince General Hospital, one of MSF’s nephrology teams continues to treat kidney problems. They now have seven working dialysis machines and have carried out dialysis for 54 patients. Additionally, the 80 patients at the Trinité hospital were moved on Sunday to the site of MSF’s inflatable hospital.

The wider consequences of the earthquake are also very much on the agenda of the MSF teams. The mental impact of the disaster is becoming more apparent in the symptoms presented by patients coming to MSF's general clinics. One clinic in Leogane reported that around half of the people they were treating were suffering from mental trauma.  In Carrefour, where the medical staff have been holding clinics for the people in the surrounding area, the teams are starting to provide supplementary feeding for some of the children.

MSF's hospital in Carrefour has just reported some of its treatment figures over an 8 day period. The staff there carried out 208 major surgical procedures and 100 minor ones; they bandaged 2,400 other injuries and had 446 people in their wards over that period. Those wards were made too dangerous to stay in by an aftershock last week and all the patients have now been transferred from their temporary tents to a new 'hospital' next door in what had been a school building.

“The national staff have been incredible. They worked non-stop since the day the earthquake hit, so many of them knowing that many of their own families were killed. They gave everything they could to helping treat as many victims of the earthquake, but now it’s starting to sink in how much they’ve lost, including loved ones,” said Niamh Nic Carthaigh, an MSF communications officer.

At the same time, the efforts to expand MSF's facilities in other areas are continuing. The team which recently constructed the inflatable hospital in Port-au-Prince is now working on a plan to create a post operative "village" in another open space in the city. The wards would again be made of canvas as the fear of being inside solid buildings is still significant for patients who were hurt by the quake. The village will provide nursing care and wound dressing along with physiotherapy and psychological help for around 100 patients recovering after surgery.