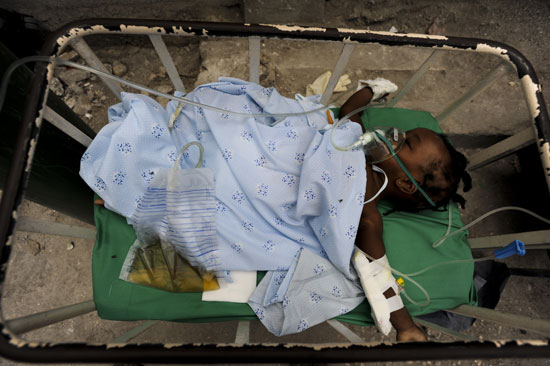 January 20th, 2010- The MSF teams have been working through the long queues of patients waiting for treatment and surgery, even as Port au Prince was shaken again by a very substantial 6.1 aftershock yesterday. In Choscal hospital, where two operating theatres have been working round the clock for days to deal with the seriously injured, the patients were so alarmed by the tremors that they once again had to be taken out of the building and put into tents in the grounds. The operating theatres have continued to work with four surgical teams rotating through the day.

In Carrefour hospital, the team has started psychological support for the patients who have had limbs amputated, and their families. A different form of intensive post-operative care is underway as physiotherapy work with burns patients has started in another hospital, while the dialysis treatment of crush victims continues in the big General Hospital. Six patients have now been treated with dialysis and the team is using a detection test to identify other patients with crush injuries who are in need this intensive care.

Every functional operating theatre is used night and day, while logisticians are racing to set up new ones or rehabilitate damaged ones. MSF surgical teams have been carrying out an average of 130 operations per day for the last few days and this is increasing as new surgical teams start work. There are now 10 operating theatres, 7 in Port-au-Prince hospitals (Choscal, Trinité, Carrefour and Chancerelle hospitals) and 3 in towns in the west of the capital (Leogane and Jacmel). In addition, minor surgical procedures like cleaning and removing dead tissue from wounds are taking place in small operating theatres in Trinité and Pacot hospitals.

Capacity will further increase in the near future, as additional operating theatres are being prepared in Port-au-Prince and in the west of the island (Leogane and Grand-Goave). The inflatable hospital with two operating theatres and 100 beds is emerging on a field in Port au Prince. The construction team expect to have it working on Friday morning.

[MSF water and sanitation specialists have started assessing the needs of approximately 7,000 IDPs living near Carrefour and have started trucking clean water into the camp.

MSF psychologists are giving support to patients and staff in the hospitals. Seven psychologists are at work on the ground, assisted by 9 social workers, and have begun group sessions and individual counseling.