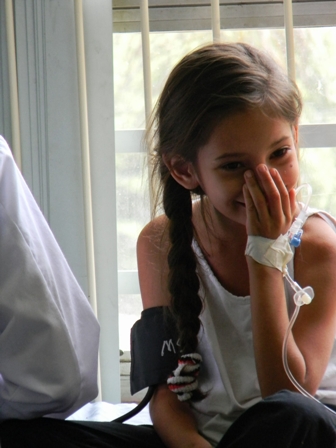 An epidemic of haemorrhagic dengue fever is spreading through San Pedro Sula, Honduras’ second city, with more than three times as many cases as last year.

This form of dengue can be deadly, with children most at risk.

Teams from the international medical organisation Médecins Sans Frontières/Doctors Without Borders (MSF) have launched an emergency response to bring down the number of children dying from the mosquito-borne disease by providing support to health authorities in the main public hospital in the northeast of Honduras.

“Since we started to work here, we’ve seen a constant flow of patients. We are focusing on providing emergency assistance to children under 15 years of age.”

Three out of every four patients treated at the hospital, including the most severe cases, are children.

Analia Lorenzo/MSF
In August 2013, the number of suspected cases of haemorrhagic dengue fever reported in the region was up 235 percent on the previous year. Local health authorities were overwhelmed, prompting Médecins Sans Frontières to launch its response.

“I came from Azacualpa, four hours’ drive away, as my granddaughter was sick,” says Mariana.

“She had been sick for a few days, but the local health centre couldn’t treat her.” Mariana’s granddaughter, who has dengue with medical complications, was transferred to the intensive care unit set up by the MSF team in the Mario Catarino Rivas public hospital in San Pedro Sula.

Endemic in Central America, dengue is a viral disease spread by mosquitoes, with symptoms like those of flu. However, this relatively mild form of the disease can develop into haemorrhagic dengue, which can cause bleeding, irreversible shock and sometimes death.

In Honduras, there are four different types of dengue. “

The four types circulate,” says Dr Neira, “with the risks of infection particularly high during the rainy season, from May to November, when the mosquito responsible for spreading the disease proliferates.”

Analia Lorenzo/MSF
There is no specific treatment for dengue fever, but early diagnosis and appropriate care can drastically decrease the death rate.

However, getting diagnosed and treated in time can be a challenge, as healthcare in Honduras is in a state of crisis, with medical supplies and qualified staff in short supply.

"The problem is that many people face multiple barriers in accessing timely and adequate treatment,” says Dr Neira.

A Médecins Sans Frontières team has trained medical staff in health centres around the city of San Pedro Sula to detect cases of dengue early and to refer sufferers to hospital promptly, while also ensuring that all children under 15 are able to access medication and treatment, free of charge, at the Mario Catarino Rivas public hospital.

The team has set up a dengue unit in three of the hospital’s children’s wards, with Médecins Sans Frontières medical staff supporting and training hospital health staff.

“We’ve also donated drugs and medical supplies to the hospital for the treatment of adults affected by dengue,” says Dr Neira. Médecins Sans Frontières continues to monitor the outbreak in case an increased response is required.

As well as its emergency response to the dengue epidemic, Médecins Sans Frontières works in the Honduran capital, Tegucigalpa, addressing the medical consequences of violence in some of the city’s most violent neighbourhoods. Médecins Sans Frontières has been working in Central America for more than 25 years, responding to natural disasters, emergencies and other medical and humanitarian crises.