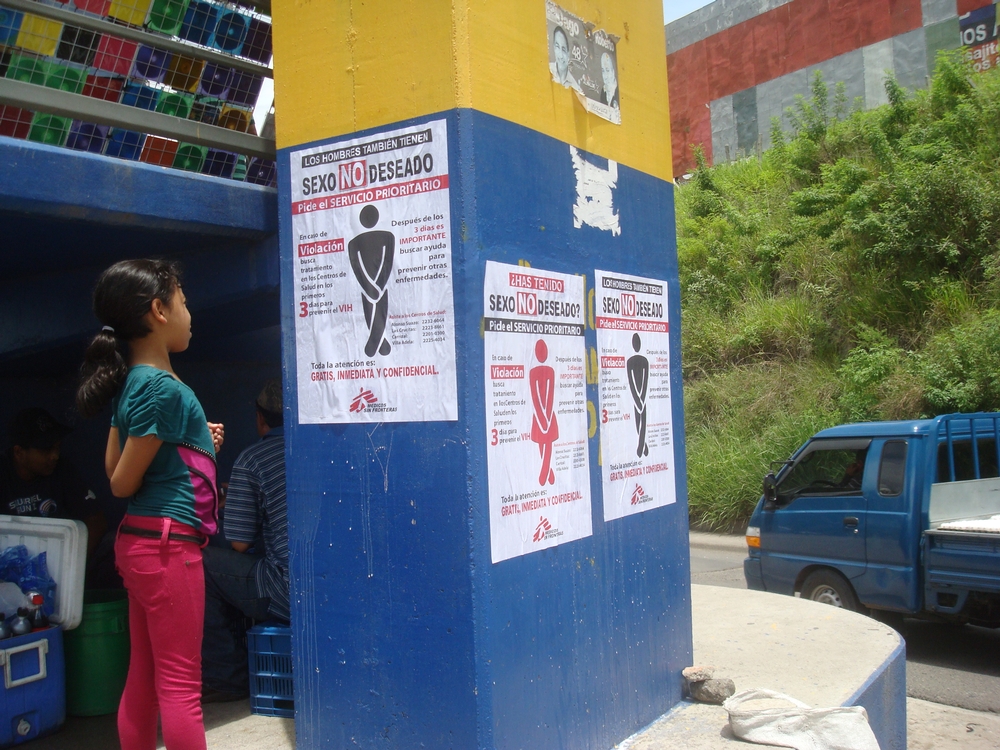 Aurelia left for work at 5 am, when the streets of Tegucigalpa were still deserted. As she walked, a white sedan car with tinted windows drew up at the curb. As the window was lowered, Aurelia found herself facing a man with a gun.

“He told me to climb in,” says 35-year-old Aurelia. “I tried to keep walking, but the car kept on following me. He said, ‘Climb in or we shoot you.’ One of the men got in the back and I was made to sit in the front. They taped my hands and my mouth and told me not to scream or else they would kill me. So I stayed very quiet so they wouldn’t kill me...".

Aurelia was raped at gunpoint by the strangers in the car. After being released, she went to a clinic supported by MSF where she received medical treatment and counselling. Her story – though horrific – is far from unique: Aurelia is just one of thousands of victims of sexual violence in the capital of Honduras, known as one of the world’s most violent cities.

In Tegucigalpa, one person is murdered every 74 minutes, while thousands of others fall victim to abductions, kidnappings and rape. Most of the victims of sexual violence are children and adolescents under the age of 19 years. Out of 2,832 rape investigations carried out by the Public Ministry of Honduras in 2013, the majority involved young people of 19 or under. Of these, most were girls aged from 10 to 14.

These shocking figures are likely to represent just the tip of the iceberg, as only a small proportion of sexual assaults are reported to the police, out of fear of retaliation and of the stigma associated with rape. An even smaller proportion of rape survivors are likely to receive the medical and psychological care they need.

Too often, assistance is offered in a piecemeal fashion, requiring multiple visits to clinics in different locations, with no continuity of care or guarantee of confidentiality. Faced with so many obstacles, many survivors opt to suffer in silence.

The ‘servicio prioritario’ (priority service) aims to change all this. Set up by MSF and the Ministry of Health in 2011 in Tegucigalpa, it provides emergency attention for people suffering the medical and psychological consequences of violence, including sexual violence. It aims to provide survivors with the care they need in one location, in the course of one visit, for free, and with confidentiality guaranteed.

The emergency medical treatment on offer includes post-exposure prophylaxis, which can prevent HIV infection if received within 72 hours of a sexual assault, as well as protection against sexually transmitted infections, hepatitis B and tetanus.

Cynthia, a medical doctor of MSF explains to a patient the importance of receive an urgent attention after a sexual assault.

The psychological care includes counselling and psychological first aid. For the survivors of sexual violence, receiving proper care can mean the difference between life and death.

“Before the doctors took care of me, I wanted to die,” says Aurelia. “I felt dirty; I felt as if I had lost a part of my life; I didn’t want to exist anymore. But I had therapy and counselling and, thanks to this, I’ve been able to overcome a lot. It has changed my life.”

Currently the ‘servicio prioritario’ is available in three of the capital’s health centres, as well as in the city’s main hospital, Escuela, while an MSF mobile team is widening its reach to other parts of the city.

The ‘servicio prioritario’ is vital for sexual violence survivors – but there is one important element that MSF is unable to provide. Following a rape, the main worry faced by many women is being left with an unwanted pregnancy. And yet the emergency contraceptive pill (also known as the ‘morning-after pill’) has been banned in Honduras since 2009.

"When the patients come to us, they are often very emotional and upset by the assault,” says Diana, an MSF doctor working in a Tegucigalpa health centre. “Beside their feelings of frustration, helplessness, rage and pain, they are very anxious that they could have become pregnant – this is the thing that worries them the most.”

With no emergency contraception available, girls and women with pregnancies as a result of rape face the choice of either giving birth to a baby they maybe do not want, or risking an illegal and dangerous abortion – both options with huge medical, psychological and social consequences.

For medical staff, not being able to provide rape survivors with emergency contraception is extremely frustrating. “It’s very hard to explain why we can’t offer the emergency contraceptive pill to a person who has suffered such an assault,” says Diana. “As a professional, I feel frustrated and powerless. And I feel helpless – because I know it exists, and they know it exists, but there is this barrier."

MSF is currently pushing for the emergency contraceptive pill to be made legal again in Honduras, so that rape victims need not fear an unwanted pregnancy or risk an unsafe abortion. In the meantime, MSF teams are working to strengthen the ‘servicio prioritario’ in Tegucigalpa and to see it rolled out to the rest of the country, so that victims of sexual violence everywhere can receive the help that, for Aurelia, made life once again worth living.

MSF has been working in in Central America for more than 25 years, responding to natural disasters, emergencies and other medical and humanitarian crises, as well as to the medical consequences of violence.