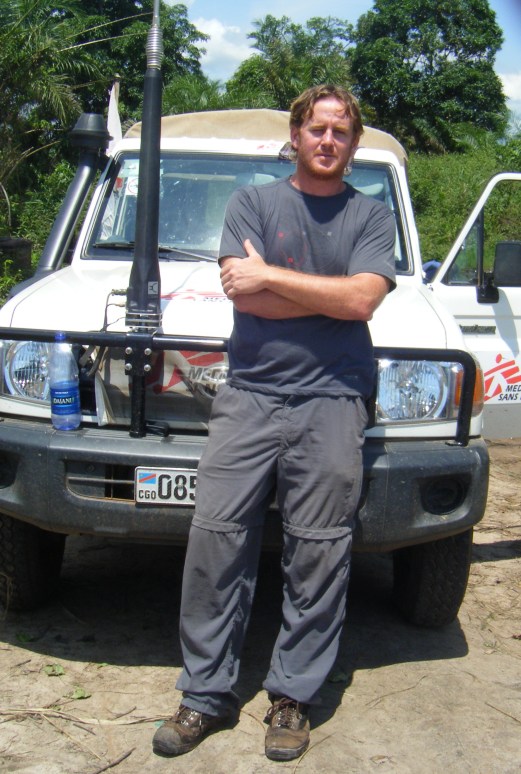 How does St Patrick’s Day translate in the heart of Africa?

Oliver McGrath of Tipperary is a Water and Sanitation Specialist working for Médecins Sans Frontières / Doctors Without Borders (MSF) in the Democratic Republic of the Congo.

(This article was originally published on thejournal.ie)

IF I WERE back home in Ireland this Saturday, I’d be in the pub watching the Six Nations game, no doubt, as a participant of a very animated crowd.

Here, in Democratic Republic of the Congo (DRC), it will be a much quieter affair. There will be no rugby, and it will probably be a while before I find out which team won!

I’m the only expat in this one remote project in the Kivus, in eastern DRC with Médecins Sans Frontières / Doctors Without Borders (MSF). So on St Paddy’s, I’ll probably be telling fellow Congolese staff about our national day over dinner or a drink – a local Primus beer rather than Guinness! I’ll tell them how a Welsh slave returned to spread the good news and banished paganism from the land without resorting to spear tackling a sinner… Though I might have some difficulty explaining how this got translated into spending the weekend in the pub, I think the laughs and making merry will be easily understood.

While it’ll be beer on most people’s lips back home on Saturday, for me the focus will be on water. A cholera epidemic has been sweeping parts of the country since last year with more than 500,000 people affected by the disease. As a water and sanitation specialist (watsan), my main role is to help people get safe water and proper sanitation facilities to prevent cholera, along with other water-borne diseases like typhoid, diarrhoea, and some types of hepatitis. I’m involved in stopping the problem at its source.

My St Paddy’s Day will look like any other day here in the Congo – though I don’t really have an average day. I might be inspecting drinking water points along the river Ruzizi, Lake Tanganika, and tributaries. Inspection takes a lot of time when cholera is the problem. We treat the water that people have taken from these sources before they carry it home in jerry cans for drinking, cooking and washing – as I said, stopping the problem at source.

Its a long long way to Tipperary...Oliver McGrath in Democratic Republic of Congo

Other days, I might be leading an exploration team of staff into the hinterlands of this stunning, green and very fertile terrain. Once, I set off for a week with five others across Katanga province in order to make sure the route was safe and to set up a new base for our vaccination campaign.

We travelled 1,400 kilometres across the worst roads I have ever seen with a truck full of equipment, a jeep and just enough cash to keep us going. Recent rains had turned the roads to swamps. However, the team – a well-chosen mixture of brawn and brain – ensured that we successfully traversed the rivers, fallen trees, and dodgy bridges. Each day, we had to make sure we got to the next big town, as staying in the bush was potentially a hazardous option.

I like that MSF get into the difficult to reach places. They have been working in this country since 1981, filling healthcare gaps where no infrastructure has been set up. A lot of people in DRC go without clean water, sanitation and healthcare, especially during times of conflict and hence they lead difficult lives. But you could do anything here if things were stable. The country has it all. It’s a very mineral rich land in the so-called developing world except that Congo does not seem to be developing fast enough for its own people, in my opinion.

When I came to work for MSF, I wanted to reach those places and help to enable people to have access to clean drinking water and therefore a better quality of living. I also wanted to put my skills acquired over the years to good use in areas were the need is great. MSF have the medical and logistical strength to get into the ‘hard’ spots and stay where many non-governmental organisations can’t.

While my Paddy’s Day might not be what I’m used to, the satisfaction of the job – knowing I’m helping people avoid deadly diseases – more than makes up for not having the parades, the rugby, and the beer. And besides, I can rest assured that I’ll wake up on Sunday feeling fresher than I normally would.

To find out more about working with MSF as a Water and Sanitation specialist, click here