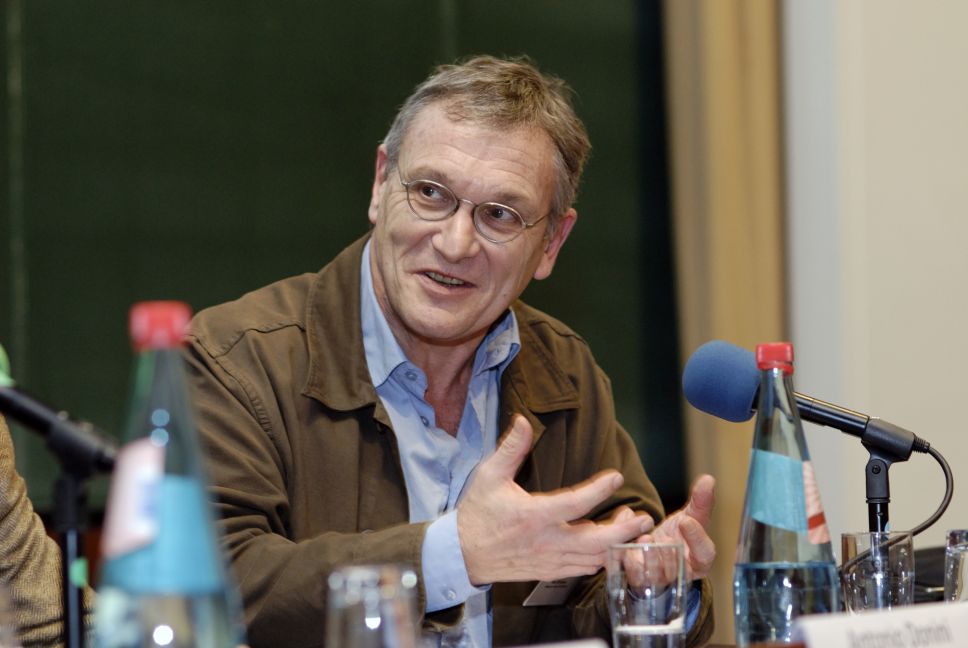 Forty years after the creation of MSF, Dr Rony Brauman, President of MSF from 1982 to 1994, looks back at its early years and considers what the future might hold for the global organisation.

Barbara Sigge
Dr Brauman trained as a doctor specialising in tropical and emergency medicine. He joined Médecins Sans Frontières (MSF) when it was run from a single room in Paris and went on to work in refugee camps and amidst famines and wars and helped shape it into the organisation it is today.

The first time I stepped into MSF’s office in Paris there was just one part-time secretary working there, Christiane. It was the mid-’70s and, after years of political activism, I had finally graduated from medical school. I’d always wanted to be a doctor, to be involved in the magic of treating and healing people — I had a very mythical idea of what medical work was all about.

I had started at medical school in 1967, when I was 17, but with the student protests of May ’68 I became deeply involved in politics, and remained so for the next five years, until a kind of ideological hangover caused me to stop.

The group I was involved in was Maoist and it started to border on terrorism and extreme violence. We had already been banned by the French government, but in 1973 we made the decision to dissolve the organisation. I went back to medical school to catch up on everything I’d missed.

At the time, only the Church and the government sent doctors to work abroad. I didn’t want to work for either, so MSF, being neither political nor religious, was very attractive for a young doctor like me. MSF motivated me to resume my studies and work late into the night, learning about surgery, tropical medicine and emergency medicine so that I would be prepared for all kinds of situations.

I knew about MSF through a friend who had gone on one of MSF’s earliest missions, in response to a natural disaster in Honduras. The mission itself was an absolute disaster; they flew all the way there and ended up just handing out buckets of water. In fact, it took many years until we proved to be useful in natural disasters.

MSF was still a tiny organisation; it had 10 or 12 doctors and nurses working in various places in Africa and Asia, and they didn’t even know where everyone was. One very loyal and hard-working doctor had been sent to Zaire and then had been completely forgotten.

Eight months later she came back to Paris, asking why none of her letters had been answered.

Then it was my turn. I was sent to Thailand, to set up a hospital near the Cambodian border, and after six months I found myself with no resources whatsoever, not a penny in my pocket. The refugees were feeding me because I didn’t have the money to feed myself. I had just enough gasoline in my car to make it back to Bangkok.

When I got back to Paris, MSF organised a lecture tour for me in the north and east of France so that I could raise enough money to keep the hospital going for the next six months.

In a way, I enjoyed that first experience: there was no hierarchy, no medical guidelines, no boss — you did what you thought was fit. You had to do absolutely everything yourself, so medical care was only a small part. That was the way it worked at the time — but it couldn’t continue.

Things changed; we began to support our staff in the field, and to pay them salaries — in fact I became MSF’s first doctor on wages. We established a small administration.

Jacques Pinel, a pharmacist, joined MSF in 1980. He drew up lists of essential drugs, established pharmaceutical guidelines and convinced us of the need for logisticians and water and sanitation experts.

We began to network with researchers, academics and specialists such as nutritionists. I was involved in the first trial for a new malnutrition treatment, which was in the form of foil-packed tablets of ready-to-use food, suitable for tropical conditions.

In the event, the tablets that the manufacturer sent out were not suitable — the composition was wrong and the taste was unacceptable, so they ended up in a warehouse, tons of them, and I ate them myself — after all, there wasn’t much else to eat.

We had decided our focus should be on war and displaced people, and so we found ourselves working more and more in refugee camps. In the camps we had a privileged position; we could start from scratch and bring services that were badly needed, which no-one else was ready to bring.

The refugee camps of Somalia, Thailand, Central America and South Africa were where we built our knowledge and skills, and forged the methods that MSF still uses today.

We learned lessons along the way. In the summer of 1980, I went to Uganda to do an exploratory mission. The country was in a state of anarchy, with armed groups fighting each other without any visible political purpose — you didn’t know where the danger would come from next. At the same time, an extremely severe famine was developing in the arid north east of the country.

By the time I arrived, about 10,000 people had already died. Just stepping out of the house in the morning was nightmarish — there were dead bodies all along the dust road, and people were incredibly emaciated and on the verge of death. The worst thing was that it wasn’t recognised as a famine.

In the capital, I’d been assured by officials that the problem had already been solved and everyone was as well-fed as in a French restaurant. I decided to go and see for myself, and what I found was a real life-saving emergency. It showed me that official papers and statistics should not be trusted too much — to see with your own eyes is absolutely key.

Only once did I think MSF itself might not make it. I was in Chad, with a surgeon and an anaesthetist and we were caught up in an ambush. There was a shower of bullets and the surgeon was hit and severely wounded. For several minutes we thought it was over for the three of us. I sometimes wonder what would have happened to MSF had we been killed.

But thankfully that didn’t happen. We went on to build up an organisation which was self-reliant, and often controversial. In 1980, we mounted the ‘March for Survival’ at the Thai-Cambodian border, to protest against Vietnamese control over humanitarian assistance in Cambodia. And in 1984 we set up a group called Liberté Sans Frontières, which challenged dominant views about the problems and disasters occurring in the Third World. It caused a great deal of controversy.

In retrospect, the group’s philosophy was neo-conservative and not everything we said was right; we were condemning ideology, whilst claiming for ourselves a position of truth. We talked a lot of nonsense, but I still think that it was useful; we were so controversial that we couldn’t count on anyone. We had no friends in aid circles, and that strengthened us. This is where our tradition of self-reliance comes from.

For those of us who took part in these debates, it was extremely fruitful. As the boss of Liberté Sans Frontières and the President of MSF, I was on the frontline of these debates, and learned how to argue and counter-argue. We got caught up in the controversy of the 1985 famine in Ethiopia and the issue of forced relocation. It pushed us to try to explain — to ourselves, as well as to the public and the media — the way we were dealing with the core issues of humanitarianism in highly-politicised situations like Ethiopia, and to have a public voice.

Financially, things were improving. It was the beginning of computers and direct mail, and inspired by how fundraising worked in the US, we set up the systems which would enable us to become fully self-reliant. We built up a very powerful logistics section, which was new in humanitarian circles, introducing the specially-prepared four-wheel drives with the big bumpers and the antennae that we still use today.

We explored specific training for medical humanitarian work, resulting in Epicentre [MSF’s epidemiological branch]. Using an evidence-based approach borrowed from the US, we began to change and improve the way we worked. We adapted many things from elsewhere — for example the various kits that we use in emergencies, a concept borrowed from Oxfam.

MSF grew, in size and reputation, becoming far bigger and more successful than anyone had ever expected. By 1990, there were 100 people working full-time in the Paris headquarters. Aid and human rights were becoming extremely popular, there was a real momentum, and we had incredible support from the public.

I believe that institutions have a lifespan — they don’t have to be for eternity. The main threat I can see to MSF is the magnitude of the organisation. In aspiring to be universal, to grow ever bigger, there’s a danger of hubris. I’m not saying we should step back and downsize, just that perhaps we should use our resources differently.

If MSF does exist in 40 years’ time, it certainly won’t be the same as the MSF we know now. As the world continues to change, MSF will have to adjust. My generation, growing up in the ’60s and ’70s, had a very different outlook from the generation growing up today. But I’m convinced that the deeper motivations of those who join MSF — the expectations and the desire to help people — remain fundamentally the same.

MSF is one of the world’s leading medical humanitarian aid organisations, running projects in 60 countries, and in 1999 was awarded the Nobel Peace Prize. MSF opened an office in Dublin in 2006. To date, Irish volunteers have departed on more than 100 missions, from Afghanistan to Zimbabwe.

This article originally appeared in the Irish Medical Times