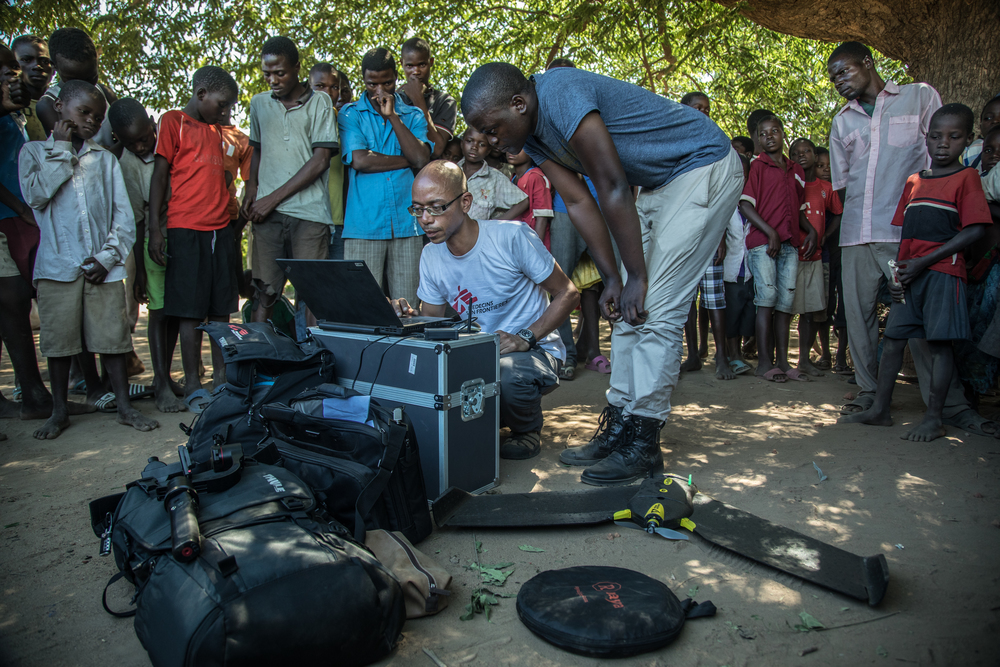 “If you don’t fail, then you are not innovating”

Bio-briquettes instead of firewood to allow populations to stay safe in conflict areas; smartphones for surveying refugee camps to rethink activities: innovations like these are how MSF adapts to challenging contexts to improve our medical and humanitarian intervention.

August 2017 saw the start of 700,000 people flee horrific violence in Myanmar, marking it the biggest exodus in recent history. Today nearly one million Rohingya refugees live in precarious makeshift settlements in southeastern Bangladesh. In the midst of the emergency, international organisations arrived, health centres were constructed, distribution points created. But how much do the organisations that are providing relief really know about the refugees?

“In July 2018, we carried out epidemiological surveys in two refugee camps in Cox’s Bazar, Bangladesh. The goal was to find out the birth and death rates, the levels of child malnutrition and what the main diseases are in the communities”, explains María Simón, emergency coordinator with Médecins Sans Frontières (MSF) in Bangladesh.  “We also wanted to know whether people were using our health facilities and what was keeping them away if they weren’t.”

The surveys’ findings led our teams to open a new mobile clinic in a large settlement where long distances and the ground conditions, particularly during the rainy monsoon season, were undermining access to healthcare. The findings were achievable due to the quick centralisation of data through an application installed on smartphones used by the MSF teams that visited the households.

“It is important that we try to overcome the obstacles we face in delivering healthcare”, says Silvia Moriana, Innovation and Transformation lead of MSF in Barcelona. “It’s why we constantly strive to find new ideas and ways of doing our work as efficiently as possible.”

In the case of Bangladesh, user-friendly technology allowed a more consistent data collection. Technology has become increasingly important for MSF over the last few years. It is applied in e-health projects such as telemedicine to overcome geographical barriers and to boost the availability and quality of services.

However, the use of technology entails constraints in an organisation that has tripled the budget in a decade and currently operates in around 70 countries worldwide, with a workforce of 42,000 staff.

“The first phase of implementing technology projects is very resource-heavy and triggers resistance. It’s only afterwards that we can see the benefits”, explains Conor Prenderville, head of the Apps4Ops (Applications For Operations) team of MSF in Spain, which was created last year to increase the tech involvement in the organisation’s mission of providing medical care. “Using technology can adversely affect the proximity to our patients, so we need to be careful in balancing its use. We need to ask ourselves difficult ethical questions. The technologies we use and promote as an organisation need to be in line with our principles.”

The ultimate objective, adds Prenderville, is that by putting more technology at the service of our operations “there will be a bigger medical humanitarian footprint on the field”, the same way that we leverage our human and financial resources today, in contexts affected by crises, natural disasters and conflict.

Adapting to the context

Beyond technology, experimenting with existing or adapted tools and encouraging the framing of problems to find solutions also helps to better understand and assist populations in need.

For example, our team in northeast Nigeria converted the locally popular three-wheelers, known as keke-napeps, into ambulances in Gwoza, where bigger vehicles like cars were banned by the military due to the conflict.

“By leaving the enclaves controlled by the army to search for firewood, people were exposing themselves to attacks, kidnapping or sexual abuse”, says Ana Santos, head of the Displacement Unit, a department headquartered in Nairobi focusing on providing assistance to displaced people.

Briquettes are blocks of fuel made by using a press with bio-waste, like sugarcane peel or groundnut bark, mixed with paper.

“Today about 600 households have replaced firewood for briquettes and many more people of the community are replicating the process on their own”, says Ana Santos. “This keeps people safer.”

Learning from the failure

“The briquette initiative is a nice human-centred example. The challenge is how to replicate something that works in one area somewhere else,” says Silvia Moriana. She adds that the risk of failure is always present in every initiative. “If you don’t fail, you are not innovating. You have to learn something in the process.”

For instance, ahead of this year’s monsoon season in Bangladesh, the Innovation department launched a call for designers to brainstorm on solutions to develop a special stretcher that would work in muddy refugee camps with reduced mobility and a high volume of cholera cases.

“The designers provided ideas, some of them original, in a very short space of time, but none of them was fully satisfactory”, says Silvia. “In the end you need to adapt, and ask the question: Is there added value in the impact of the proposed solution versus the existing one? Does it improve the medical work, the experience of the patient or the knowledge of the situation?”

The answer is not always easy.