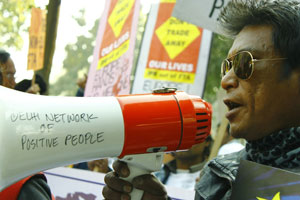 Nearly 2,000 people living with HIV along with MSF & other organisations took to the streets of New Delhi at the start of the EU-India summit.

They warned that harmful provisions in a Free Trade Agreement being negotiated between the EU and India could severely hinder access to affordable medicine for people in developing countries.

“We have watched too many people die in places where we work because the medicines they need are too expensive,” said Dr. Unni Karunakara, International President of MSF.

“We cannot allow this trade deal to shut down the pharmacy of the developing world.”

Thanks to competition among generics producers in India, the price of first-line HIV medicines has dropped by more than 99 percent, from US$10,000 per person per year in 2000 to roughly US$150 today.

This significant price decrease has supported the massive expansion of HIV treatment worldwide: more than 80 percent of the HIV medicines used to treat 6.6 million people in developing countries come from Indian producers, and 90% of pediatric HIV medicines are Indian-produced.

MSF and other treatment providers also use Indian generic medicines to treat other diseases and conditions.

“Whether we get to live or die should not be up to trade negotiators,” said Mundrika Gahlot of the Delhi Network of Positive People.

“We’re all here today with one clear message to India and the EU: Don’t trade away our lives.”

Existing trade rules already limit the possibility of making generic versions of new medicines, but the EU-India FTA threatens to make this situation even worse, by creating new barriers.

At the Summit, both sides are set to announce ‘trade offs’ in the negotiations, in which the EU has been pressuring India to agree to several measures that will affect the production, registration and distribution of affordable generic medicines.

MSF is particularly concerned about ‘enforcement’ measures being pushed by the EU that could stop medicines at Indian ports from leaving the country on their way to patients in other developing countries, and could even draw treatment providers like MSF into court proceedings.

“What the EU is trying to do with this trade agreement is effectively slow poison for the production of affordable generic medicines in India, which has helped keep so many people alive,” said Piero Gandini, Head of Mission for MSF in India.

“This trade agreement could target us as treatment providers, simply for buying generic medicines from India to treat patients in our programmes.”

The protest in Delhi followed similar rallies this week by activists and people living with HIV in Nepal, Malaysia, the UK, South Africa and Cameroon.