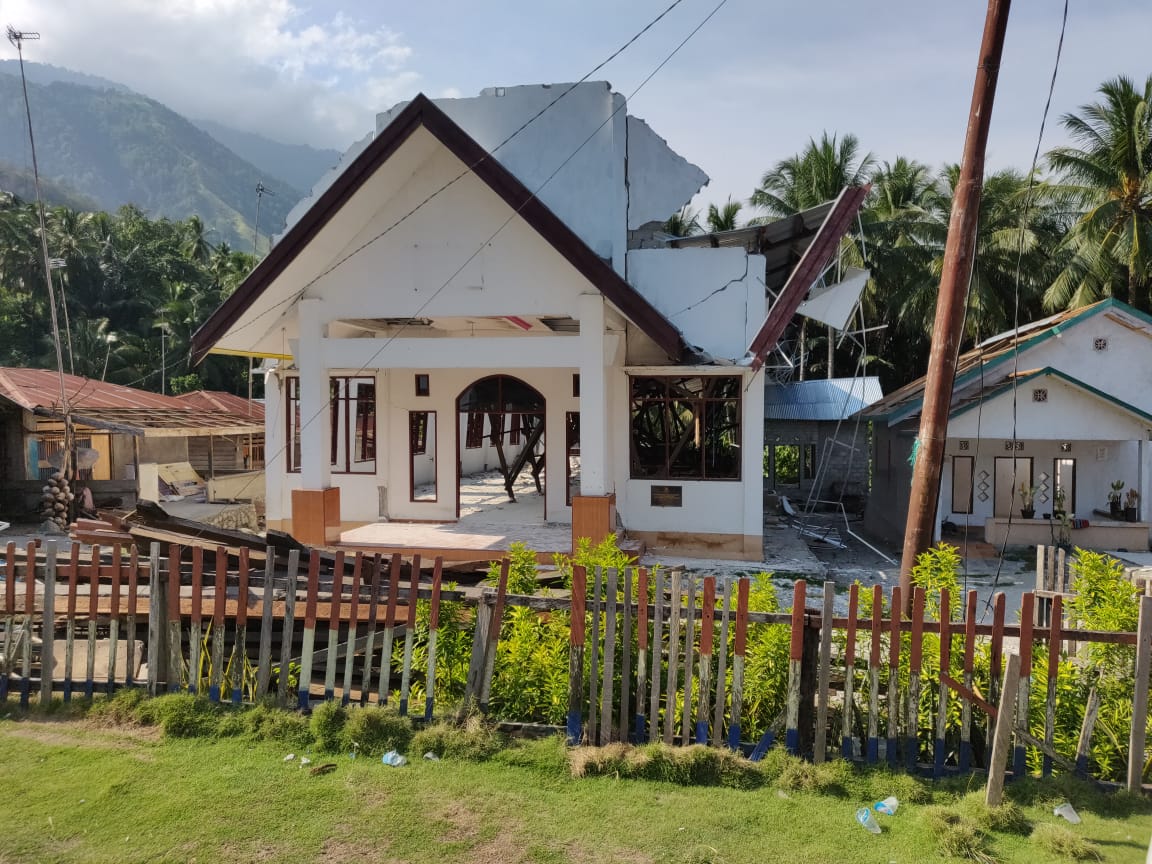 Indonesia: ‘Central Sulawesi took its toll on me’

MSF is currently wrapping up its emergency response in Central Sulawesi, Indonesia. On 28 September, a series of earthquakes hit Indonesia’s Central Sulawesi Province causing significant damage and loss of life. As of 30 October, 2,101 people are known to have died. A further 4,438 people have been seriously injured. Rangi Sudrajat, an MSF medical doctor, shares her experience working in Sulawesi.

It was the 7th of October, nine days after a 7.5 magnitude earthquake followed by a 6-meter high tsunami struck and paralysed Central Sulawesi.

“The death toll (in Central Sulawesi) has risen to 1,900 and climbing,” the TV blared at the Makassar airport just before I was to board the plane going to Palu City.

When I arrived at the Palu City airport, the TV report seemed to be an omen of what I found.

The airport itself was busy, military aircrafts were parked surrounding the recently fixed runway, and the infamous collapsed air traffic control tower immediately met my gaze, standing in ruins. Inside the airport, there were lots of people waiting, trying to catch a plane to get out of the city. I saw a boy with a huge bandage on his head sleeping on his mother’s lap. Silently, I whispered “safe journey,” a prayer for the little boy.

“Welcome to Palu,” the MSF administrative officer told us, the newcomers. We were a team of three – me, a medical doctor; a nurse; and a water and sanitation-logistician (watsan-log) specialist. He looked tired, I thought of the admin officer. The members of the assessment team (composed of a project coordinator, medical doctor, logistician, and administrative officer) have been here since October 2, living inside tents in a hotel parking lot. 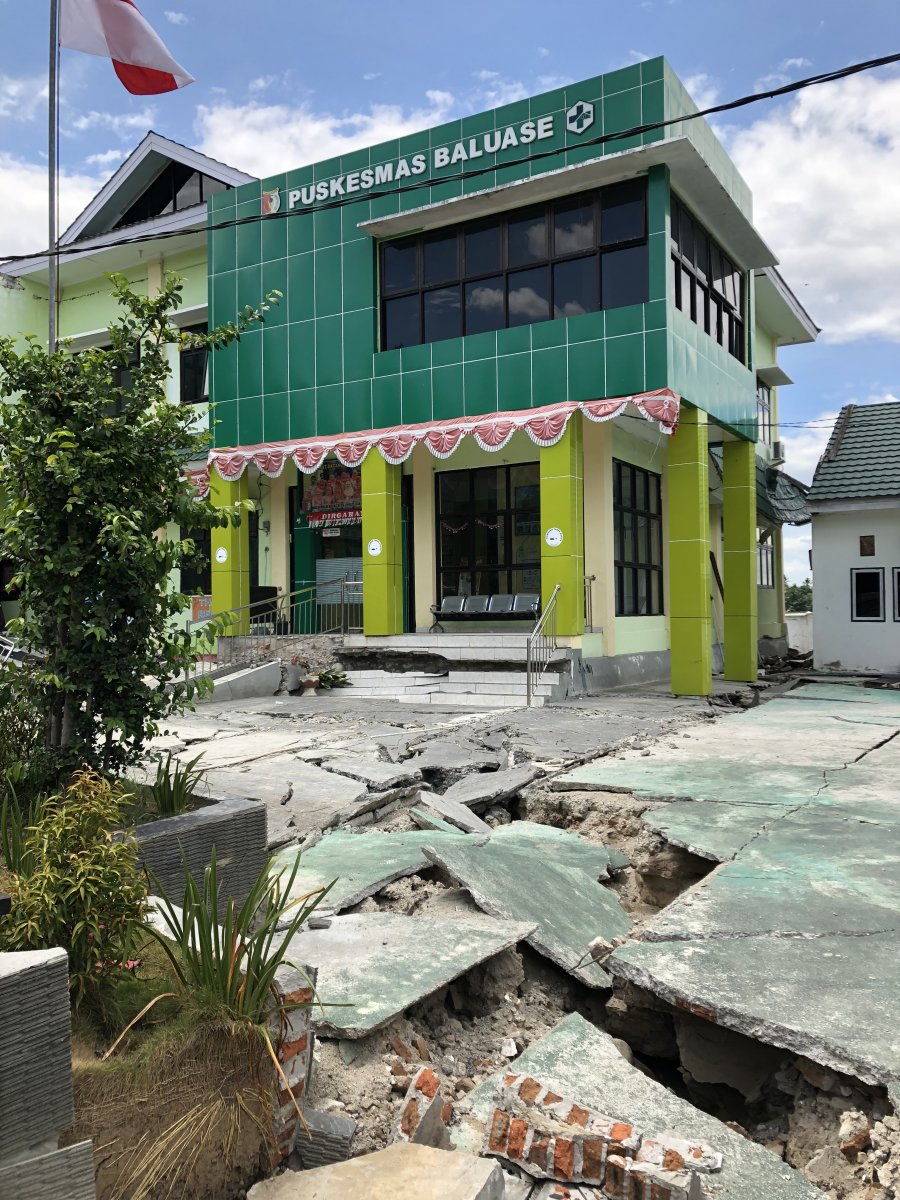 “It’s not so bad anymore, we have electricity and water now. It was hard during the first few days,” the team told me.

“Food is scarce but it’s not too bad, as long as you don’t ask for fried chicken or pizza, we’ll be fine,” the admin officer grinned.

The next day, myself, the nurse, and the watsan-log joined the Puskesmas (community health center) Baluase Mobile Clinic to Sigi, one of the three provinces that was affected by the triple disaster of earthquake-tsunami-liquefaction.

“The trip is not usually this long” Dr. Krishna, the Head of the Puskesmas, told us, “Due to the damaged roads and the collapsed bridges, we need to take a different route. Before, it only took 45 minutes from Palu to Sigi. Now, the trip takes two hours.”

From the samll car windows, I could see tall grasses surrounding us and the newly-created dirt road. “The military cut down the fields and poured sand to create this road. Before this, Sigi was completely cut off from the outside world,” Dr. Krishna’s husband who was driving the car explained to us. 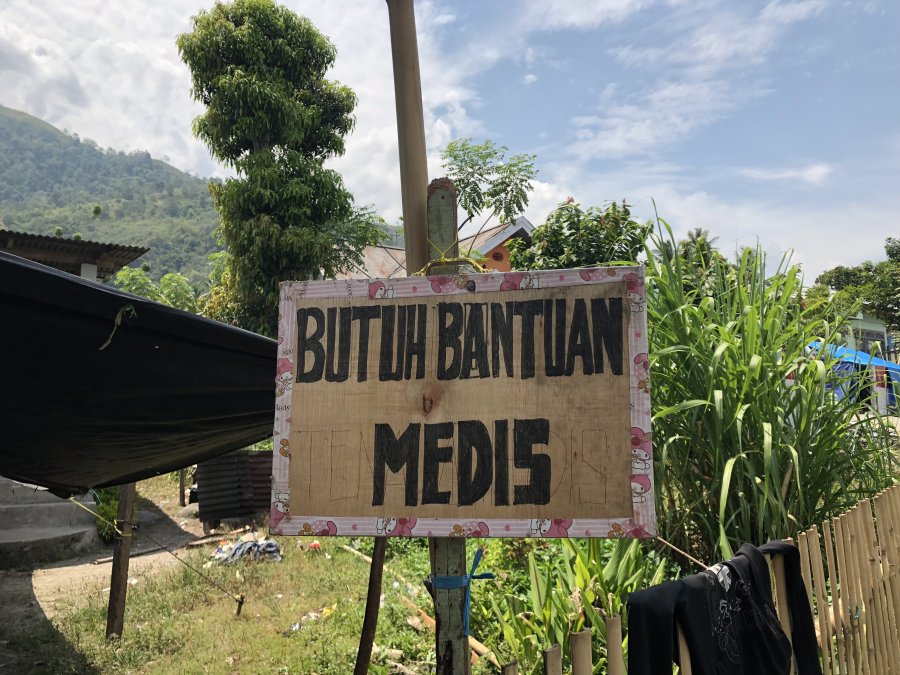 To my despair, I soon found this to be true. Without electricity and with a desperate plea for help, a family explained to me why they’d put up this sign asking for medical help. They spent dreadful nights waiting for anyone who could help and evacuate their badly injured family members.

“I was evacuated around five days after the earthquake. I was put on a pick-up truck and they brought me to Palu,” said a mother with a broken and dislocated leg, “I’m fine now, but I lost my seven-year-old boy in the ruins, he was found dead.”

Ruins and devastation were found everywhere you looked in Sigi. Grounds split open, houses crashed down, and buildings were torn in pieces. From afar, it looked like nothing happened to the building that used to be the Puskesmas Baluase, but when you came closer, it was obvious that the center of the district health service, providing services for more than 15,000 people, was badly damaged.

But MSF already had an action plan in place to restore health services to the area. By 15 October 2018, the foundation for a temporary Puskesmas was set on the ground by the MSF team.

While the logistics and watsan team was working hard to rebuild the health centre, my medical team, supported by Puskesmas staffs, started our daily mobile clinic activities in all of the 13 villages of the South Dolo District.

Sometimes, it could get really tough. I have worked in emergencies with MSF before, but treating the people who are victims of a large scale natural disaster in your home country is different and heartbreaking. It definitely left a personal impact on me.

When confronted with this tragedy, I did what I usually do in my other missions: I spent time playing with my favourite people -- the children. 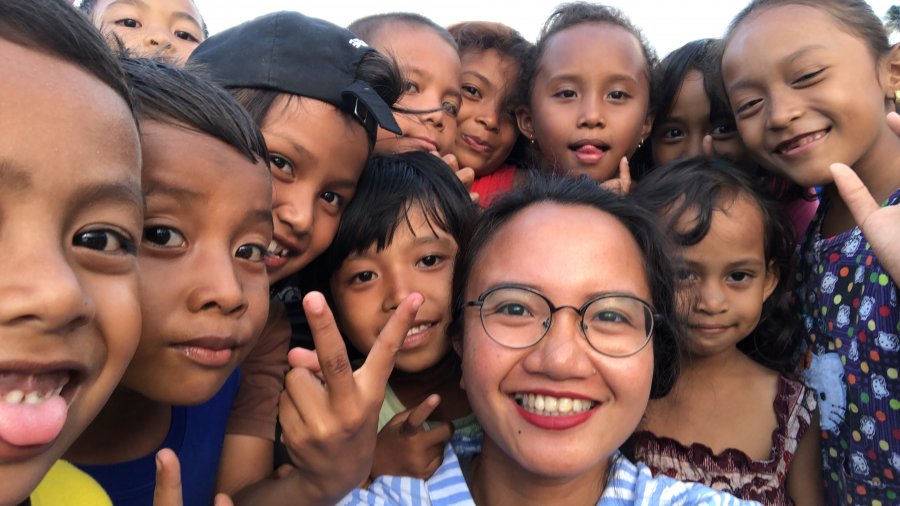 At the time of writing, MSF has finished the construction of the temporary Puskesmas in Baluase, reviving its most important function as the centre of the district’s health service. MSF also installed water tanks and latrines in several refugee camps in Sigi province.

Working alongside the District Health Office, MSF continued to restore several other Puskesmas in the Palu and Donggala areas, and provided medical and psychosocial support.

It will take time for the citizens of Palu-Donggala-Sigi to be able to fully function as they did before. However, the most important thing I learnt during my stay with the communities is the importance of inner strength and resilience. They taught me that the ones left behind should grab onto life and live life to the fullest. It’s okay to cry from time to time, but it’s more important to smile and be happy. It’s almost an obligation to do just that, in exchange for the love that was given by those who were taken too soon by the triple disaster.

When the grounds split open and everything
came crashing down
When our favourite ocean washed your roofs
and mine
and took your hands
from mine
I hope you know I will live bravely for the sake
of the love you gave me once:
“I hope you live the life you’re proud of and
I hope you will always be kind.”
We’ll always be each other’s home sweet home,
I’ll see you in time.