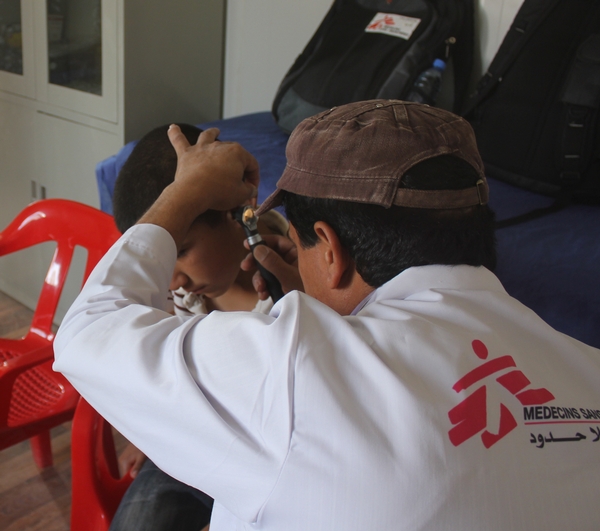 As the crisis in Syria intensifies, people continue to flee to neighbouring countries. More then 50,000 Syrians have sought refuge in Iraq, including 42,000 in the Kurdistan region where many live in overcrowded camps.

MSF medic providing assistance to Syrian refugee. Iraq 2012 © MSF
50,000 Syrians have sought refuge in Iraq, including 42,000 in the Kurdistan region. MSF has opened a mental healthcare programme in the camp. Iraq 2012 © MSF

Domeez camp, near the city of Dohuk in the Kurdish region of Iraq, was set up at the beginning of 2012 and is home today to nearly 15,000 Syrian refugees of Kurdish origin. Since May 2012, Médecins Sans Frontières/Doctors Without Borders (MSF) has been running a 24-hour clinic in the camp, in collaboration with Dohuk’s Department of Health.

Today, MSF is the camp’s main health provider,  offering medical consultations and mental healthcare to the refugees, and providing training for local health staff. To date, MSF teams have provided over 20,500 consultations.

“Until June there were about 2,000 people settled in Domeez, and the camp was running well,” says Anja Wolz, MSF field coordinator in Dohuk. “But in August, the situation deteriorated because of a sudden massive arrival of refugees."

"With up to 1,000 people crossing the border each day, the camp quickly became overcrowded and, despite the efforts of the authorities, the level of assistance was clearly insufficient.”

For the past few months, major efforts have been made to improve the situation before winter starts. But with around 500 people crossing the border every day into Dohuk governorate, some of the newly arrived refugees in Domeez camp still have to share tents, blankets, mattresses and food with other families.

“I arrived with two of my children, but had to leave my husband and my two other daughters behind,” says a middle-aged Syrian woman.

“We walked for more than six hours to cross the border."We don’t have our own tent yet, so we must share with another family. I have kidney stones and it is very painful."

"Since we arrived here I have been lying down all the time because of the pain. I need surgery to remove the stone. Here, we Syrians suffer from sickness, but also from the difficult situation we have gone through.”

Most of the refugees in Domeez camp arrived with nothing, having left everything behind in Syria. Once in Iraq, they are issued with a six-month renewable residence permit by the Kurdish authorities, which allows them to look for work.

Most find jobs as daily labourers. People who have been here for some time have begun to build extensions to their shelters and some have opened small shops within the camp.

Some of the refugees have had no news from their families back in Syria, and many report having lost family members as a result of the violence.

“In our consultations, we see many patients suffering from psychological distress,” says Wolz. “So in August we decided to open a mental health programme to provide them with specific care.”

By the end of September, MSF’s mental health team had carried over 290 psychological consultations.

In Jordan, Lebanon and Iraq, which all share borders with Syria, MSF has been providing medical care mainly to Palestinian, Syrian and Iraqi refugees. MSF teams in these countries are prepared to deal with needs arising from the conflict in Syria.