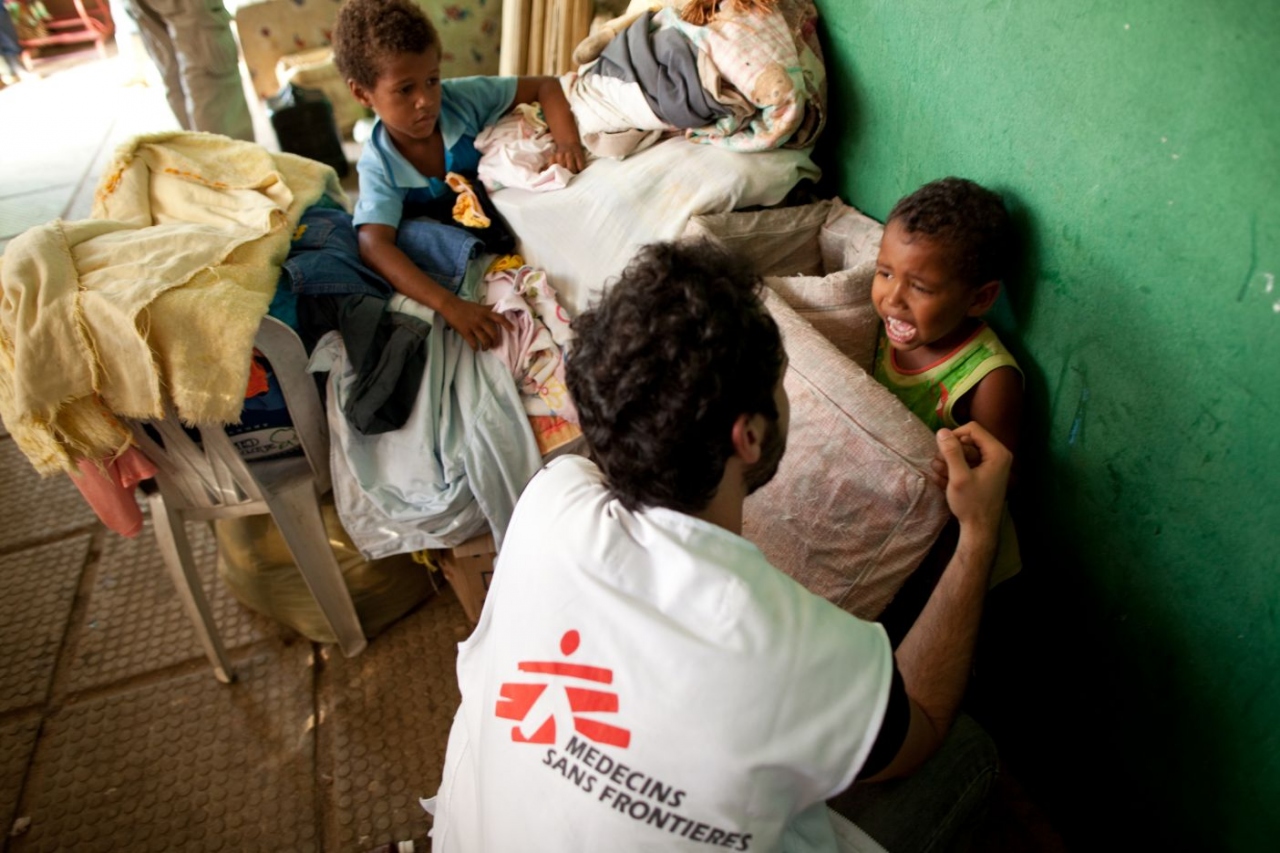 MSF doctors and nurses are often seen treating physical ailments: bandaging the war-wounded, rehydrating a cholera patient, performing an emergency cesarean section. But for more than 20 years, MSF has also been caring for patients’ mental health.

For people who have lived through terrible events, the psychological consequences can be severe. Depression and anxiety can immobilize them, at just the time when they need to take action for themselves and their families.

At the same time, specialized clinicians treat severe mental illness. But severe illness accounts for a minority of the cases that MSF sees.

People sought help for many reasons — the agonizing loss of a child in an earthquake, the trauma of sexual violence, getting caught up in a violent conflict. MSF mental health workers listened to their stories, and helped them find ways to cope and move on with their lives.

The following is a series of snapshots from MSF mental health programs in Kashmir, Democratic Republic of Congo and Iraq. These snapshots sketch some of the complex and painful issues confronted by those who seek counselling, as well as some of the challenges encountered by MSF in providing these services.

MSF counsellor Madina Bukhari works in Kupwara district, where for years the population suffered the consequences of the ongoing Kashmir conflict. Most of the people she counsels are direct victims of this violence who suffer from depression, anxiety, and post-traumatic stress.

“I’ve had women telling me how they were having dinner with their families when someone burst in and shot their husband in front of their eyes. Others have lost family members or witnessed violence. Some of the youth were tortured. All these memories are often very vivid in their minds.”

Madina finds it rewarding to aid in the recovery of fellow Kashmiris. Many of the people she counsels report feeling better afterwards. “Counselling helps them live in the present and shows them how the present can be better than the past. We encourage them to take part in their community’s activities, which can help get them back on track and get on with their lives.”

Gulam suffered from depression for years before being referred to MSF. He endured headaches, sleep disturbances and memory loss, and was lonely, withdrawn and unable to work. Counselling helped him get his life back on track.

“Since I’ve seen a counselor, I’ve made so much progress. I started by writing about my emotions regularly and it helped to be able to express them. Now I’m reading and writing a lot, I can concentrate very well and I’d like to continue studying and improve my education. I know I can do it now.”

MSF’s mental health program in Kashmir carried out more than 5,800 consultations in 2009.

The people of eastern DRC have suffered through decades of brutal and traumatic armed conflict. Hundreds of thousands have been displaced by fighting. Many have been stripped of their homes, possessions and livelihoods, while others have been killed, wounded or raped.

Since mid-2009, psychosocial counselling has been part of the range of health services offered by MSF in the neighbouring towns of Kitchanga and Mweso, in DRC’s North Kivu province. Counsellors recruited from the local population, often victims of the conflict themselves, meet with a steady stream of people wanting to talk about the trauma they have endured. More than 1000 people started counselling during the first half year of the program.

Many of the people who come for counselling are women who have suffered physical or sexual violence. A woman from Kitchanga, 54, recounts what happened to her before she came to see MSF.

“I was out with a group looking for food, when we heard gunshots coming from all sides. We ran, and dispersed into the woods. I was with two young people and they were killed right there in front of me.
“I fell to the ground, and when they caught me, they raped me. When they had finished, one of them made to shoot me, but the others stopped him, and cut me with knives instead.

“When armed groups started coming to our village, we would spend the night in the bush.

“If you had nothing to give to the bandits, you’d be killed. Every day people would talk about someone they knew being beaten or stabbed to death.

“Since then, I’ve been living here in the camp. My heart is always beating too fast. I’m terrified whenever I go to collect food – how could they do this to me?

Overall levels of violence may have decreased in Iraq, but highly volatile areas remain, and many people continue to die in bombings and assassinations. This unpredictable violence is the leading cause of trauma-related symptoms and psychological distress among Iraqis.

MSF teams determined that there were few counselling services available in areas of central and southern Iraq that had been hard hit by violence, and high needs for mental healthcare. But providing this care is complicated by the poor security situation, which forces MSF to manage its Iraq programs from Amman, in neighbouring Jordan.

In collaboration with the Iraqi Ministry of Health, MSF mental health officers trained 17 counsellors to work at three hospitals in central Iraq, beginning in September 2009. By August 2010, the counsellors had already conducted more than 2500 sessions. Sessions focus on everything from daily stressors, like inability to pay for school fees, to trauma connected to the violence.

MSF’s international teams are only able to visit the counselling programs in Iraq once a month, due to security restrictions. The rest of the time, the team relies on technology to connect the Iraqi counsellors with MSF mental health officers in Amman.

Originally forced to use unreliable instant messaging and mobile phones, in mid-2010 the team began using a videoconferencing system that has greatly improved supervision and collaboration.

“Using the videoconference, I am more connected to the counsellors,” says one of the MSF mental health officers. “I feel more in touch with the person. I am also able to get more ideas about the attitudes and skills of the counsellor ... I am able to have an emotional impact.”

The team plans to expand the reach of the program by working with local communities to increase awareness of mental healthcare, and to reduce the stigma associated with it.