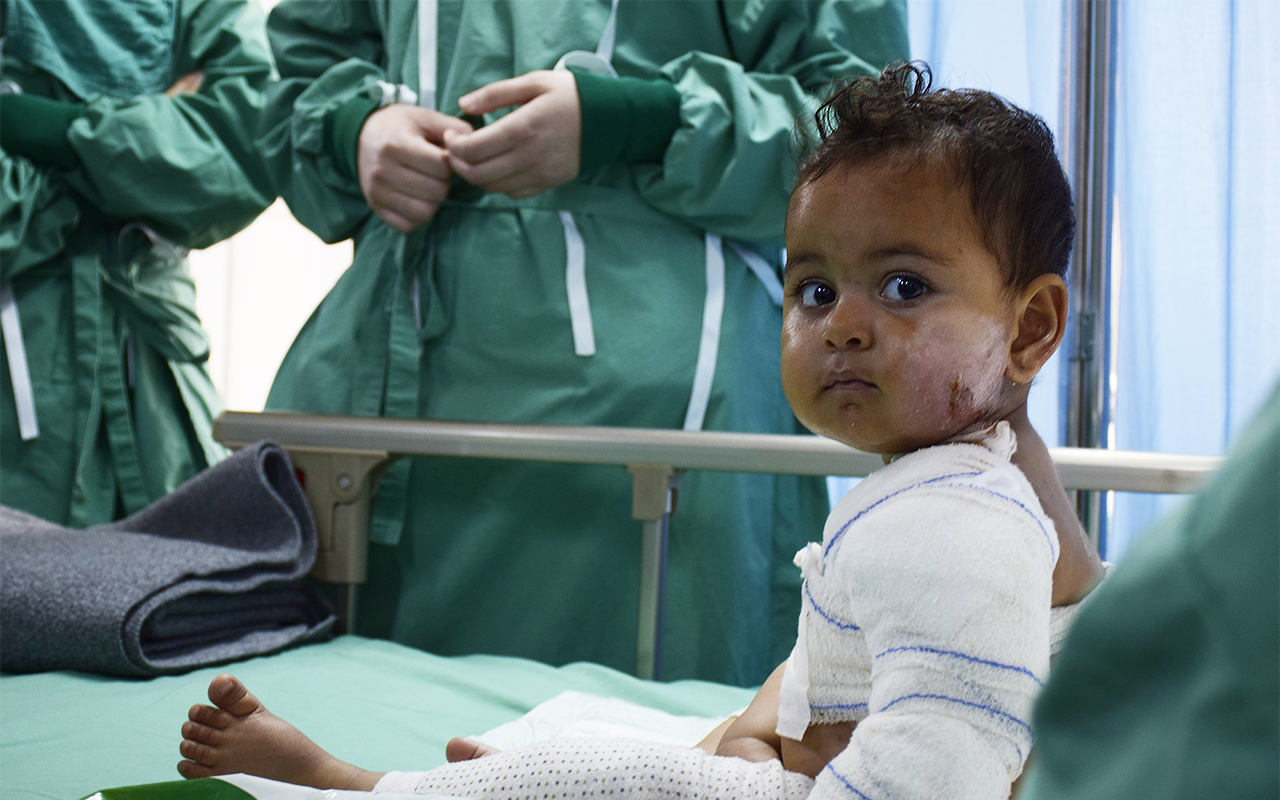 Iraq: Providing a lifeline in Qayyarah

Bushra Mohammed, above, one year and 4 months old, was hospitalised in the burns unit at MSF Hospital in Qayyarah. 12% of her body had burn wounds. After two skin grafts (a surgical operation in which healthy skin is transplanted to the burn site), Bushra needs to stay in the hospital for several more days. Doctors prefer to monitor her recovery process due to her young age and the severity of her wounds.

“We are from Qayyarah, we came to this hospital because it is the nearest hospital and we knew MSF was working here. Before the last war with the Islamic State group (IS), there were other hospitals, the General and Jumhouri hospitals, but they were shelled and destroyed.”

“It was 8:00 pm and we were having dinner, all of us, the family. Bushra’s 5-year-old sister went into the bathroom to wash her hands after eating. She turned the faucet of the hot water, and extremely hot water came pouring out. She feared that she could not turn the faucet again to close it, and left it open.”

At this moment, Bushra came in; she follows her sister’s every move. She slipped into the water and fell with her soft skin touching the very hot ceramic floor.

“We all jumped when she screamed. She was crying in pain, and my heart was pounding when I went in to look for her. Her father carried her straight to the hospital, but still, her arm suffered a bad burn despite our quick reaction. In the hospital, the staff attended to her burns and applied dressings to cover the wounds properly. Every two days they wash and clean her wounds, and then they informed us that she needs a skin graft. We have been here in this ward for 20 long days.

Bushra is playful and curious, being stuck in bed the whole day every day is hard for her. She is even tired of seeing the colour of the green sterile hospital scrubs. As everyone who enters the room to see and visit wears a green sterile gown, she gets upset when she sees this green colour. She used to cry whenever she sees me wearing it, and would stop as soon as I took it off. I am now more aware of what could happen if she is left alone even for a single moment. I will never let her out of my sight ever again.” 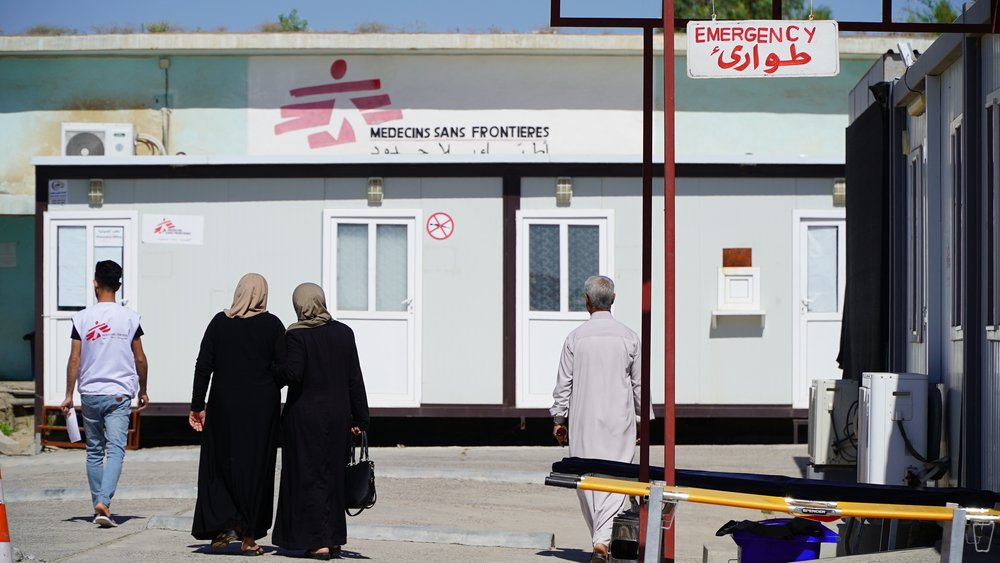 MSF in the town of Qayyarah

The town of Qayyarah, some 70 km south of Mosul in the Ninewa governorate, lies on the west bank of the Tigris River. Before the Iraqi army retook the area at the end of August 2016 it was under the control of IS group for two and a half years. Close to Qayyarah, six camps now house up to 100,000 internally displaced people (IDPs).

Qayyarah General Hospital was partially destroyed in 2016. When MSF opened a new hospital in December 2016, it was the only functional health facility in the subdistrict for a population of 300,000 people.

Since 2016, the hospital expanded its medical services and today includes an emergency room, an intensive care unit, two operating theatres, a neonatology ward, ambulatory and outpatient therapeutic feeding centres, two inpatient wards, a laboratory and a mental health program offering psychological and psychiatric consultations. In April 2018, MSF also opened a ten-bed burns unit that is currently the only specialised medical facility to provide hospital care to burns victims in the Governorate of Ninewa. More than 160 people have been hospitalised and treated in the burns unit since it was opened. 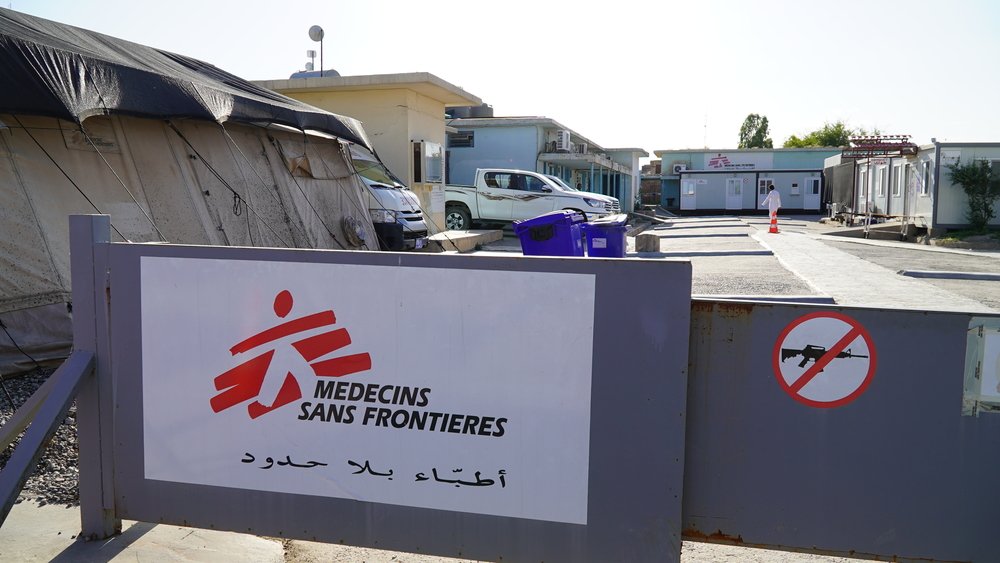 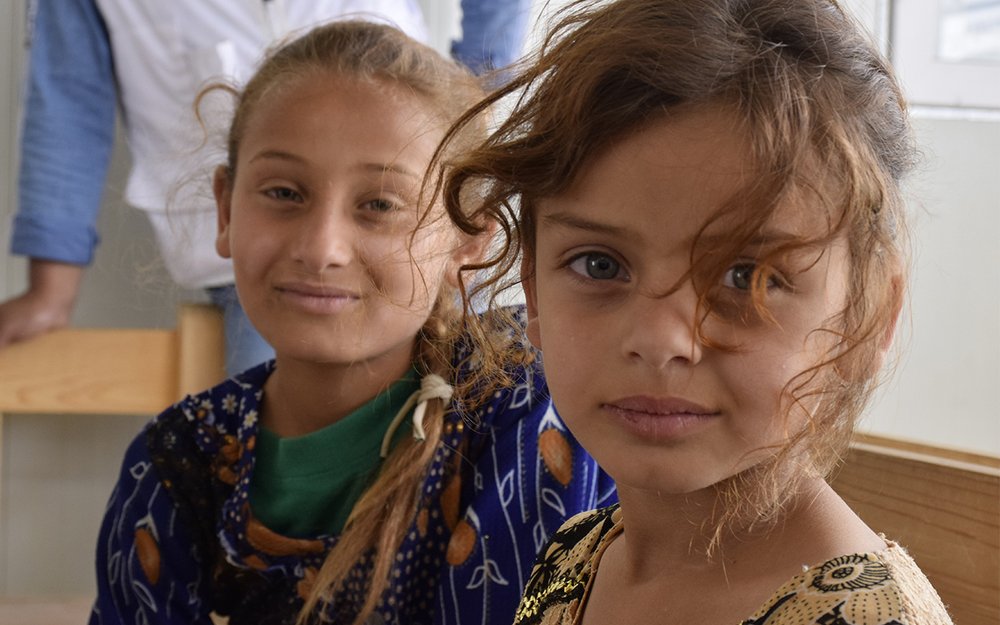 Mariam and Aisha, aged five and eight, in the waiting area of the outpatient department at MSF primary healthcare centre in the Airstrip camp for displaced people in Qayyarah, Ninewa Governorate.

Mariam and Aisha are from a village close to Tikrit town. Their lives changed in 2017, when the family moved to Mosul to follow their father. He died during the battle for Mosul. Masteen, the mother of the two girls, decided to flee the town to protect her children Mariam, Aisha and their three brothers.

When they returned to the village they found their house destroyed; they had nowhere to go. Since then, they have lived in the Airstrip camp in Qayyarah.

Masteen, thirty-nine years old, cannot hold her tears back while she tells her story, covering her face with her veil.

“I didn’t want to leave our village; my husband forced me. From that moment, our lives were overturned and now I’m alone with my children in this camp. We’ll never have our lives back. We live in a tent, and we survive thanks to the food distributions and some money that one of my married daughters sends us. I dream of living in a proper house with my family; just one room would be enough, out of this camp.

I often think of taking my own life. I’m tired; I see no hope for me. My family is so unlucky.” 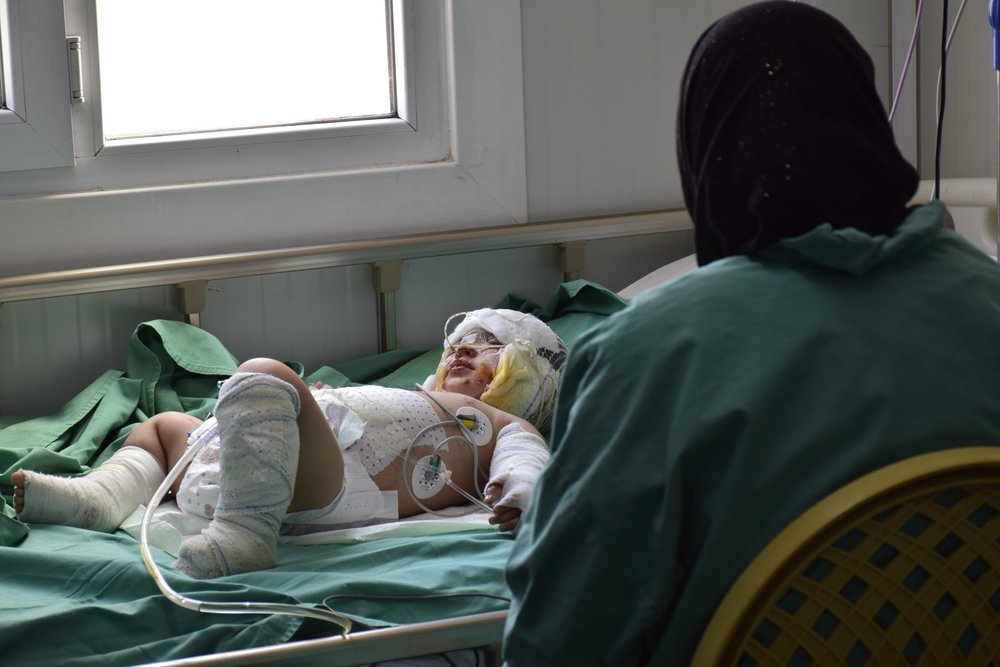 They were admitted to the burns unit at MSF hospital in Qayyarah one week ago. At the time of their arrival, Abdusalam was suffering from burn wounds on 28% of his body (face, arms, abdomen and legs). Aia had burn wounds on her face and on her right hand (5% of her body).

Aia will be discharged in a few days, but Abdusalam needs a longer recovery process since his wounds are more extensive. He could be facing a stay in the hospital of more than one month and he will soon undergo a skin graft, a surgical operation in which healthy skin is transplanted to the burn site. This surgical procedure generally reduces the course of treatment needed and minimises scarring.

Aia’s discoloured [burnt] lips move slowly. She has difficulty pronouncing her words clearly to those around her, but in spite of the pain she is in,  she is keen to talk to people. “It is good to pass the time instead of waiting while Abdulsalam is inside the operating room.”

“We arrived at the hospital at 9:00 pm. It took us one hour to reach the hospital. People and relatives recommended this hospital to us so we came in a hurry.”

“Abdulsalam is my grandson, but I raised him as my own child. His mother abandoned him when he was a baby. He follows me around the house, wherever I go, and I am very protective of him,” says Aia.

“Our stove caused the fire. We thought that it was turned off, but it was not properly closed, and gas was leaking. In a moment the kitchen ignited and flames and thick black smoke covered the room. The child was outside and the blowing flames caught up with him. My face and hands were caught in the fire, and he was burnt on his legs, hands, the lower part of his abdomen and his face as well. We also suffered asphyxia because of inhaling the heavy gas. We both fell unconscious for a while. When I regained consciousness I was still in the house and immediately was rushed alongside Abdulsalam to the hospital. We arrived there with black smoke on our faces.”

“We were given painkillers and our burns were treated instantly. The next morning he underwent surgery. Today will be his third surgery in eight days.” 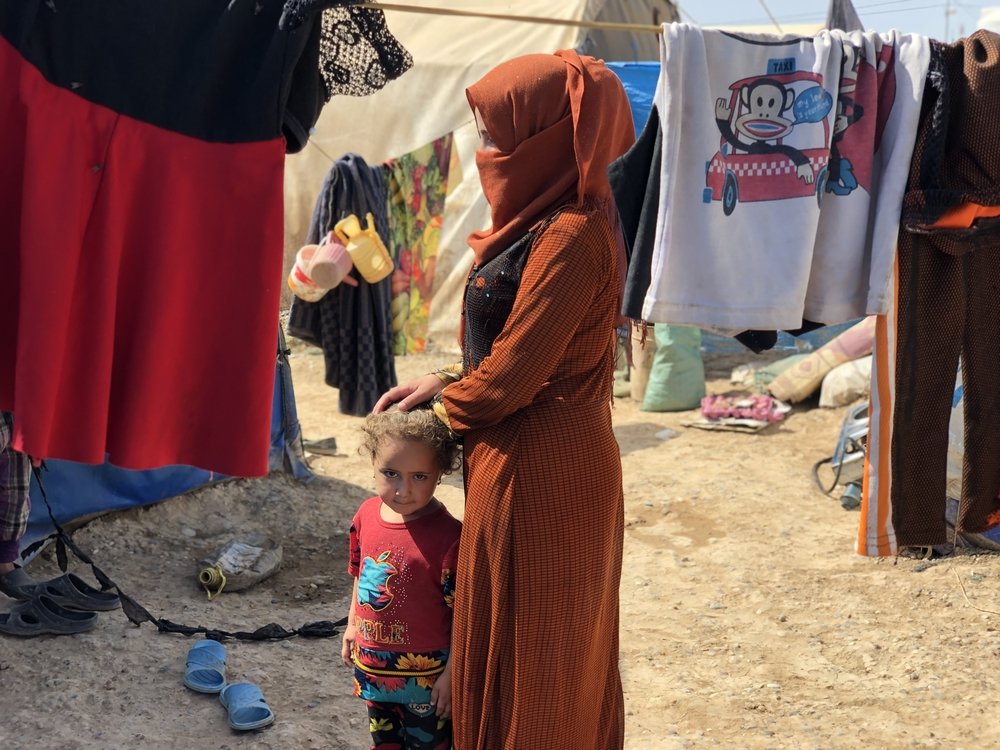 Asma, aged twenty, has been living in the Airstrip camp in Qayyarah since early 2018 with her two daughters, Jennah, three years old, and Mariam, two years old. They’re from a town in the vicinity of  Qayyarah.

“I got married four years ago when I was sixteen. I saw my husband for the last time in the summer of 2017. He went to Mosul before the battle. I don’t know what happened to him. I never saw him again; I don’t know if he’s alive or dead. I moved to this camp in early 2018 with my daughters and what remains of my husband’s family. We’re four women and five children; the eldest is 11 years old.”

“We can’t go back to our hometown. They no longer accept us. My daughters don’t have documents; they don’t have official birth certificates, and they can’t attend school. The only paper they have is the vaccination record card provided by MSF. We survive thanks to the distributions of food and hygienic kits in the camps.”

“I don’t know what will happen to us; I just hope that my two daughters and my family will be safe”. 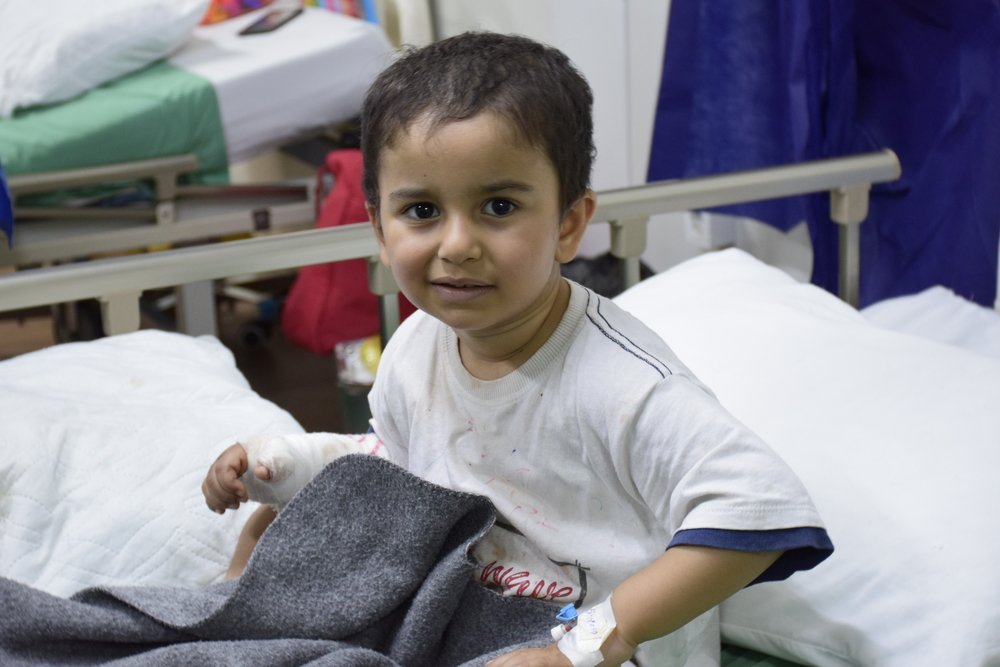 Ahmed Alaa, two and a half-year-old, has been hospitalised for 12 days in the burns unit at MSF Hospital in Qayyarah due to burning injuries on his upper limbs and chest. He is from Qayyarah.

Ahmed had to undergo a skin graft, a surgical operation in which healthy skin is transplanted to the burn site. The procedure was successful, his skin is recovering and he can be discharged.

While Ahmed sleeps, his mother, sitting at his bedside watches him with relief. “We have been in the hospital for a week now. I am very happy to see that his condition has improved, and thankfully he will be discharged tomorrow.” 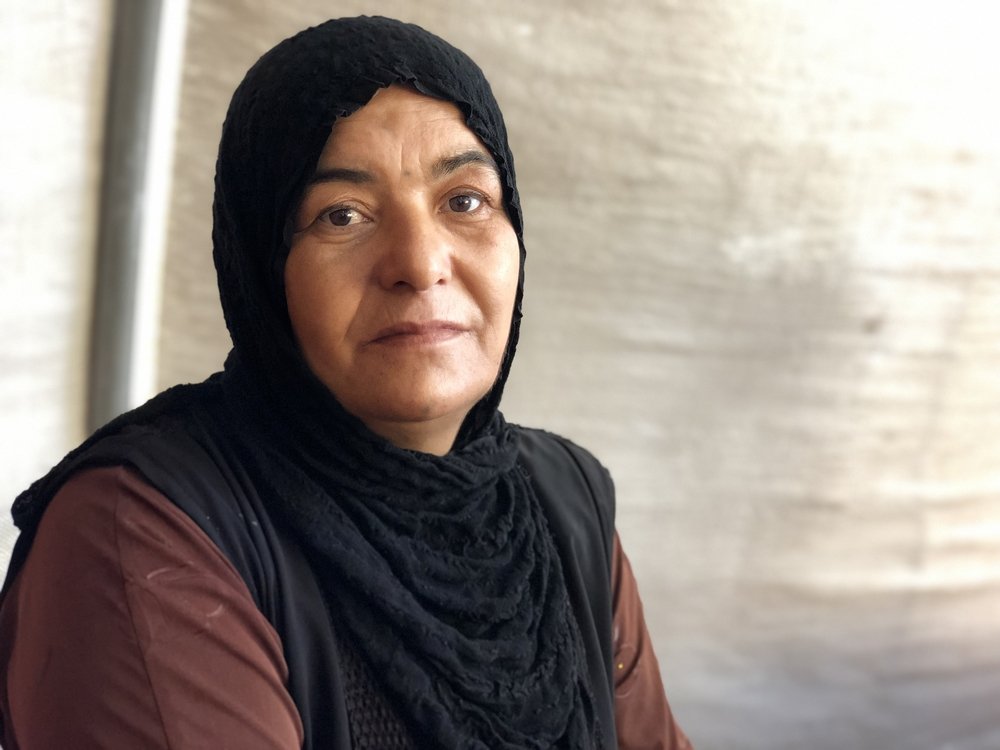 Seita, 50 years old, from a village in the vicinity of Qayyarah. She’s been living in the camp with her family for two years.

“I lost one of my sons two years ago; he was killed during an airstrike in Mosul. He was 21. My other two sons were in Mosul at the time, I don’t know what happened to them. I wish every day to see them again, safe and sound, hugging their children and their wives. My husband died due to a heart attack and now I am taking care of our family. There are ten of us ten; we live together in this tent. Me, my daughters-in-law, their children, and my boy, he’s 17, and he has had paraplegia since he was born.” 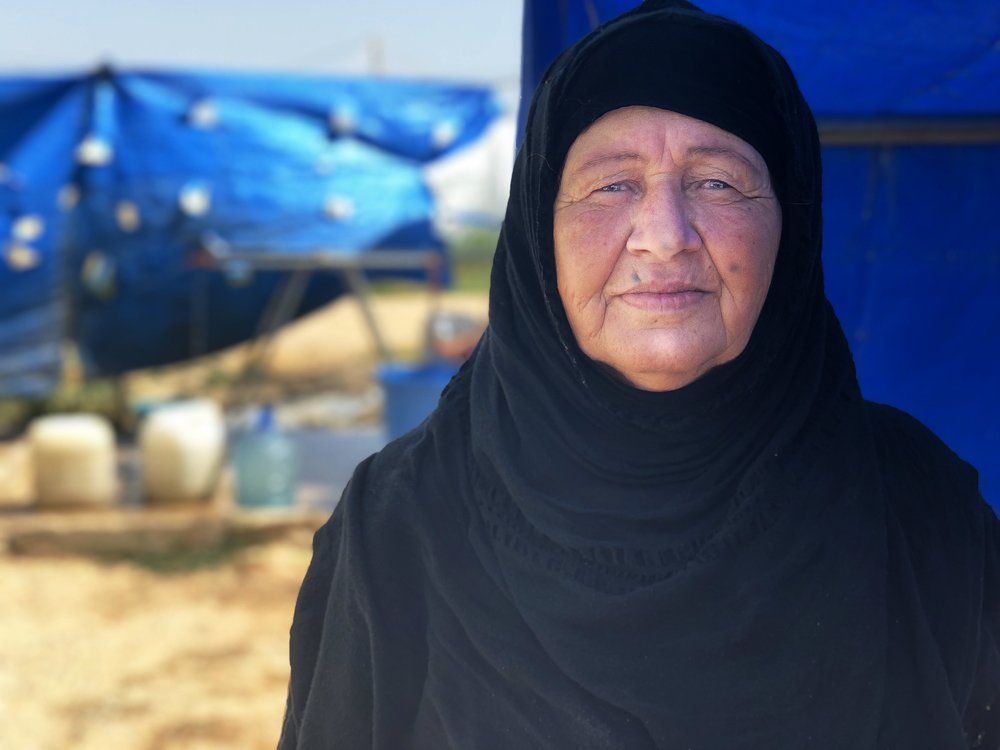 “I can’t remember my age. What happened to my family makes me forget.”

“We no longer have a house, it was burnt down, and we can’t go back. For two years and a half we’ve been living in a tent; it’s all that we have. All my family lives in this camp, all my twenty-five grandsons and their mothers.”

In 2019, more than 1.6 million people are still displaced in Iraq, according to the International Organisation for Migration (April 2019). 53% of the displaced population live in Ninewa Governorate. Up to one hundred thousand (according to UNHCR), displaced people are in the camps close to Qayyarah town (Jeddah and Airstrips camps) wherein July 2017 MSF began integrated nutrition and mental health project. Since then, MSF has scaled up the medical activities provided to the displaced population in the camps. Today, MSF runs a primary healthcare centre including sexual and reproductive health services (antenatal and postnatal care, basic obstetric and new born care, family planning), a 24-hour emergency care service, outpatient consultations for pediatric and adult cases and chronic diseases, a vaccination program, a nutritional unit, mental health services and health promotion activities and sensitisation campaigns in the camps.

Since January 2019, MSF primary health centre has provided medical assistance to more than 130 patients daily. More than 13,800 medical consultations and 4,600 emergency consultations were performed; more than 250 deliveries were assisted and more than 500 individual psychological sessions were offered to the population living in the camp.