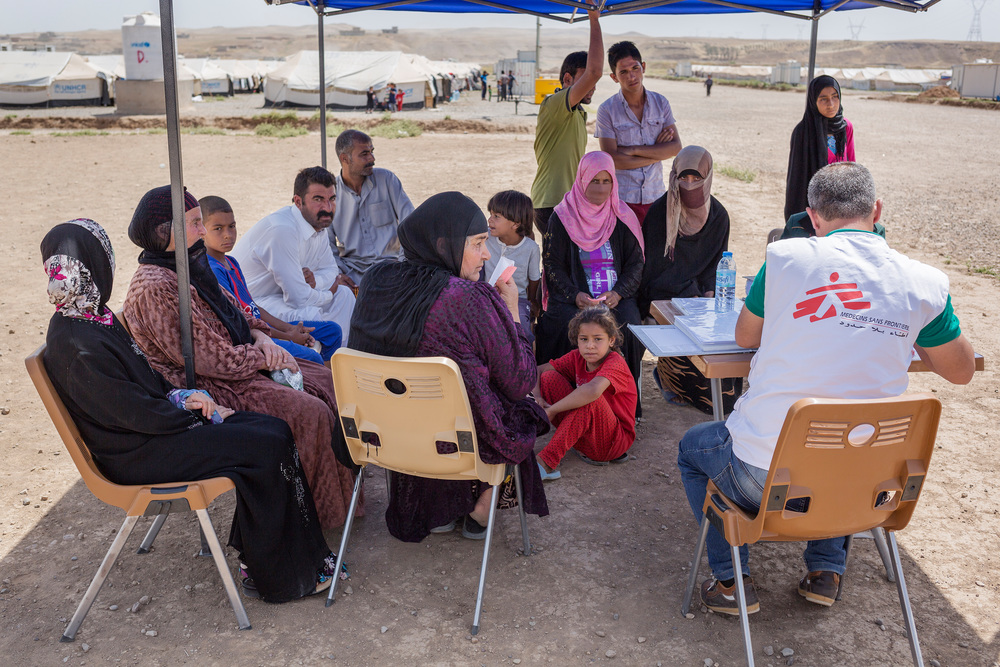 Iraq: "There are no heroes in this story, only victims"

When Ahmed* arrived at MSF’s field hospital south of the Iraqi city of Mosul, many of the hospital’s staff burst into tears.

For years, Ahmed, a skilled nurse, had been their colleague, caring for the sick and injured of west Mosul but now he was their patient and in need of urgent medical care.

Two days earlier, Ahmed and his family had been caught in crossfire as they fled their west Mosul home. Ahmed was hit several times; his wife and parents were seriously injured and his youngest son died in his arms. 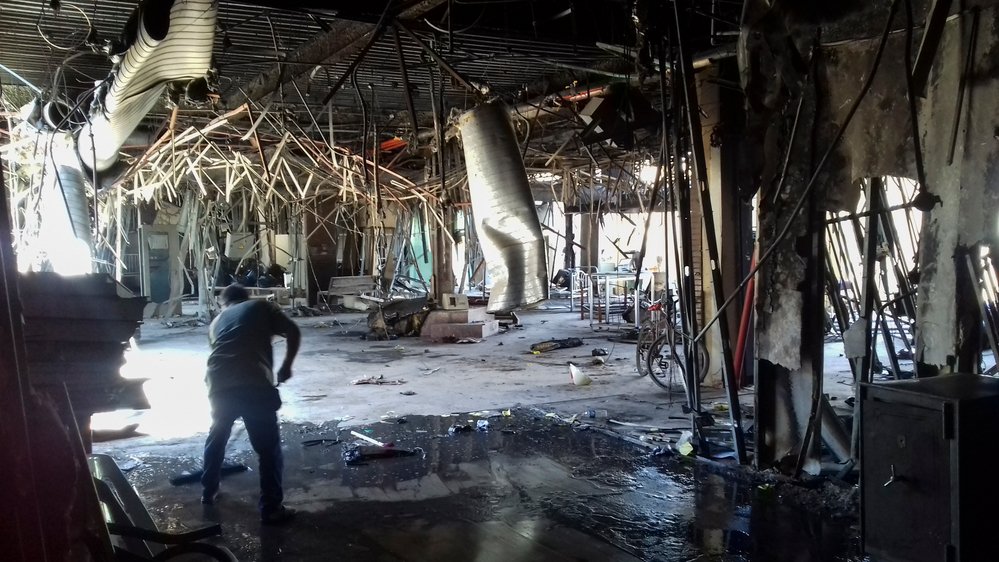 Francesco Segoni/MSF
Khansa hospital destroyed during the battle for Mosul.

“As we were running, I turned back and found my son gasping,” he says. “I saw he had multiple gunshot wounds to his back and chest and, as a nurse, I knew that my son was dying. There was nothing I could do to save him.”
Ahmed’s two older sons were also in the hospital, physically safe but visibly traumatised; both stared silently into the empty space.

Before June 2014, MSF’s Iraqi staff say that hospitals in Mosul provided a very high level of medical care. There were skilled nurses, doctors and surgeons, adequate medications and high-quality equipment available and accessible to all.  Under IS control however medical care was still available but the quality of services began to decline.

"They would be allowed to travel, but a relative would be taken as a ‘guarantee’ in case they didn’t return"
Dr YasserA surgeon from mosul

According to Dr Yasser,* a surgeon from Mosul who joined the MSF team two months ago, many medical workers decided to stay in the city, despite the risks, in order to help the people of Mosul.

“All the medical supplies and drugs had been taken from public hospitals to supply just the few hospitals IS controlled, and fewer and fewer clinics were able to operate due to the lack of supplies. If someone had a serious medical condition, they could ask permission to leave Mosul for treatment. They would be allowed to travel, but a relative would be taken as a ‘guarantee’ in case they didn’t return.” 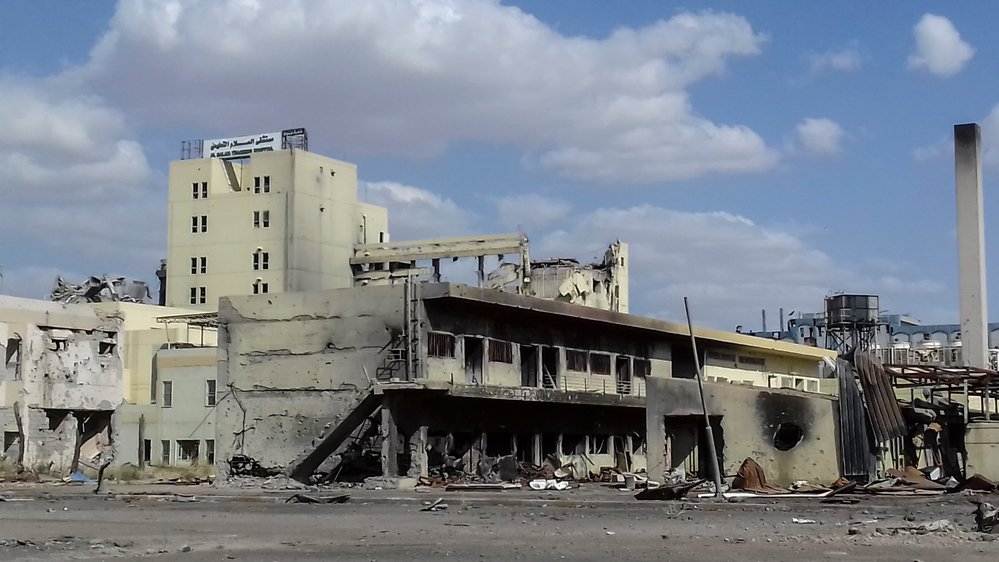 Francesco Segoni/MSF
The Al Salam hospital destroyed during the battle for Mosul.

As the battle for Mosul began in October last year many health workers in IS controlled areas within West Mosul were reportedly forced to live within the confines of the hospitals, so as to be available to treat wounded fighters.

“Surgeons especially were imprisoned and couldn’t leave the hospitals,” says Dr Wassim,* an MSF doctor. “Civilian injuries were neglected and fighters were prioritised over ordinary people.”

Many medical workers reportedly remain amongst the estimated 200,000 civilians trapped in west Mosul but as fighting has intensified many hospitals have been damaged or destroyed by gunfire, shelling or airstrikes.

“Few hospitals remain in west Mosul,” says Ahmed, from his hospital bed. “For the past two weeks, I worked in one and it was just me in my ward. Each ward in the hospital had only one staff member. There used to be eight to 10 staff per ward.”

During the fighting, as health facilities came under attack or were caught on the frontline, some medical workers went into hiding, sometimes treating patients in their houses. 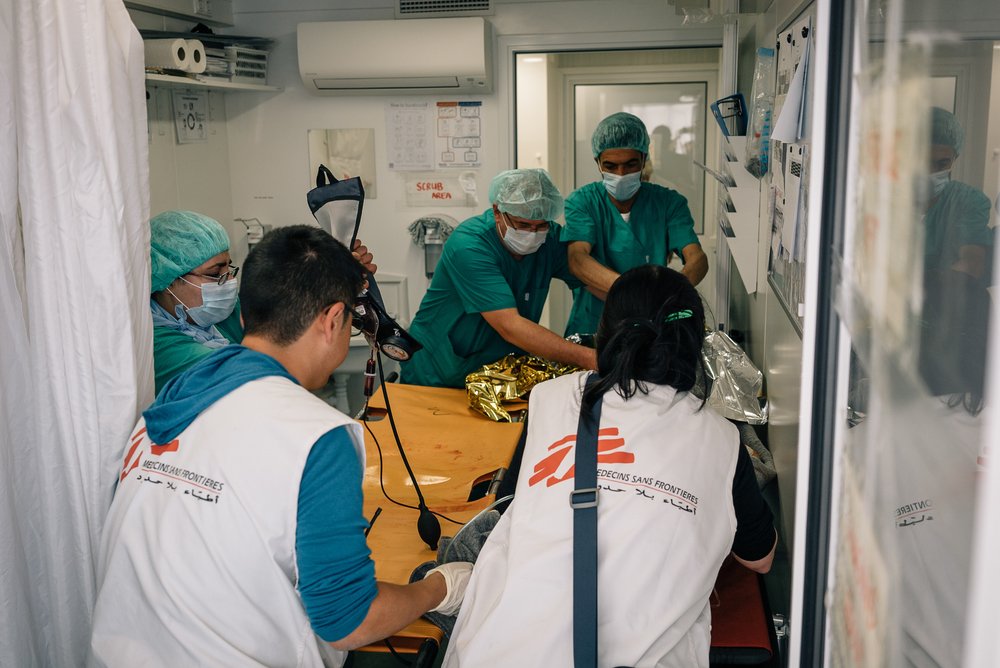 “We knew war was coming and we prepared ourselves months ago – we all did,” says Dr Wassim. “I had been stockpiling drugs and essential medical supplies for some time. There were many doctors in the neighbourhood, and each one had a street, block or area to cover. The equipment wasn’t sophisticated. We had painkillers and antibiotics, but we lacked lifesaving equipment like chest tubes, so we had to improvise. One day, after an airstrike, a concrete pillar fell on the leg of a patient trapped under the rubble. They could not move him, so a general surgeon had to do the amputation with only morphine for pain relief, but he saved this person’s life.”

“It is a disaster to be a patient inside west Mosul”, says Ahmed. “Most of the patients who needed intensive care have died, and a lot of others have died because they didn’t reach a hospital in time.”

Horrors of the conflict

During the battle for Mosul, many health workers have themselves been victims of violence or seen their relatives, friends or colleagues maimed or killed. Concetta Feo, an MSF psychologist, has been organising individual and group sessions to provide psychological support to MSF’s Iraqi staff as well as train them in providing psychological first aid.

"Sometimes we lose our professionalism and our emotions are too high. We are not stones"
Dr Wassimmsf doctor in mosul

“All of our Iraqi colleagues, medical or not, request mental health support,” says Concetta. They say this is what they need most. They have all been through traumatic events, and medics, in particular, have been exposed first-hand to the horrors of the conflict. For months or even years, they have been risking their own lives to save others. After an airstrike, the ambulance drivers and nurses are often first on the scene to pick up the injured, or dig in the rubble, fearing that amongst the victims they will find relatives, neighbours or friends.” 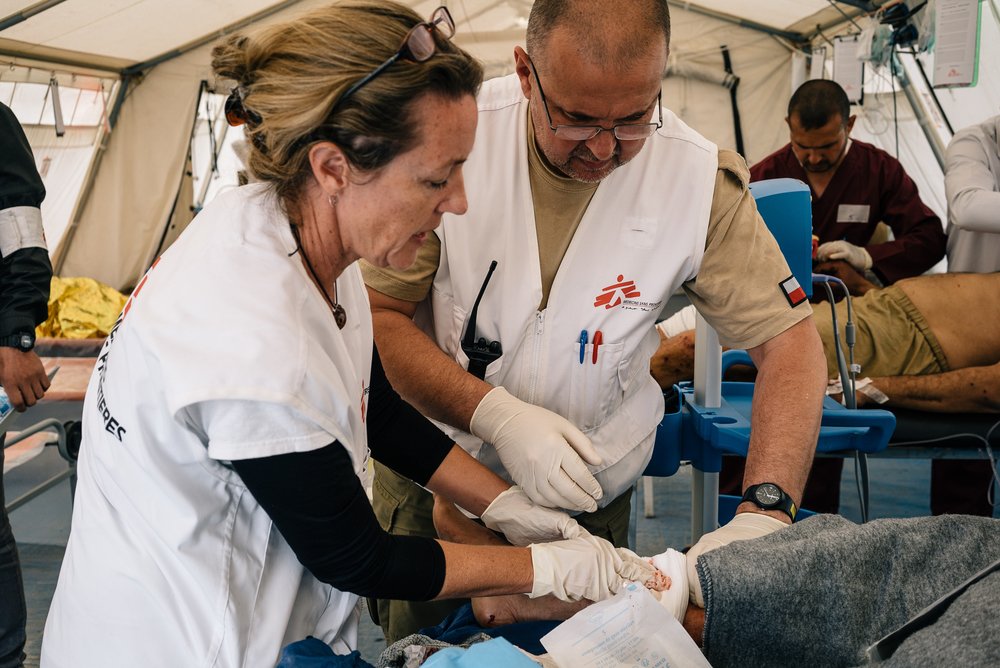 Hospital staff working in the emergency rooms of Mosul and the surrounding areas have also been exposed to the conflict’s horrors, which are often far too close to home.  Many MSF staff still have family trapped in the IS-controlled areas of West Mosul, and they have not heard from them in weeks or even months.

When we receive wounded patients, the first thing we ask is, ‘Where are you from?’” says Dr Wassim. “This is because all the areas in west Mosul are our areas – our families live there. My nightmare was always that one day I would receive my family in the emergency room. Sometimes we lose our professionalism and our emotions are too high. We are not stones.”

Despite the extreme challenges and deep sadness of daily life in and around Mosul, the resilience of the health workers of Mosul is awe inspiring.

“Waiting for news and expecting bad news is emotionally and psychologically consuming but for many of our staff, working in MSF hospitals is healing: It means they are doing something concrete to support those still trapped on the other side,” ends.

On whether he sees his work in Mosul as heroic, Dr Wassim says: “There are no heroes in this story, only victims. We just didn’t have a choice. Sometimes I feared for my life when I had to go out and retrieve wounded patients. But then I sat for a moment and thought, ‘If I don’t go, this man will die – and it will be my fault, because I didn’t help. I’m a doctor and it’s my duty.”

MSF teams continue to provide lifesaving emergency and surgical care to men, women and children wounded in the ongoing battle for Mosul. At the same time, teams are expanding their response to cover gaps in hospital care left by the destruction of local health services. MSF teams currently work in six medical facilities in and around Mosul. 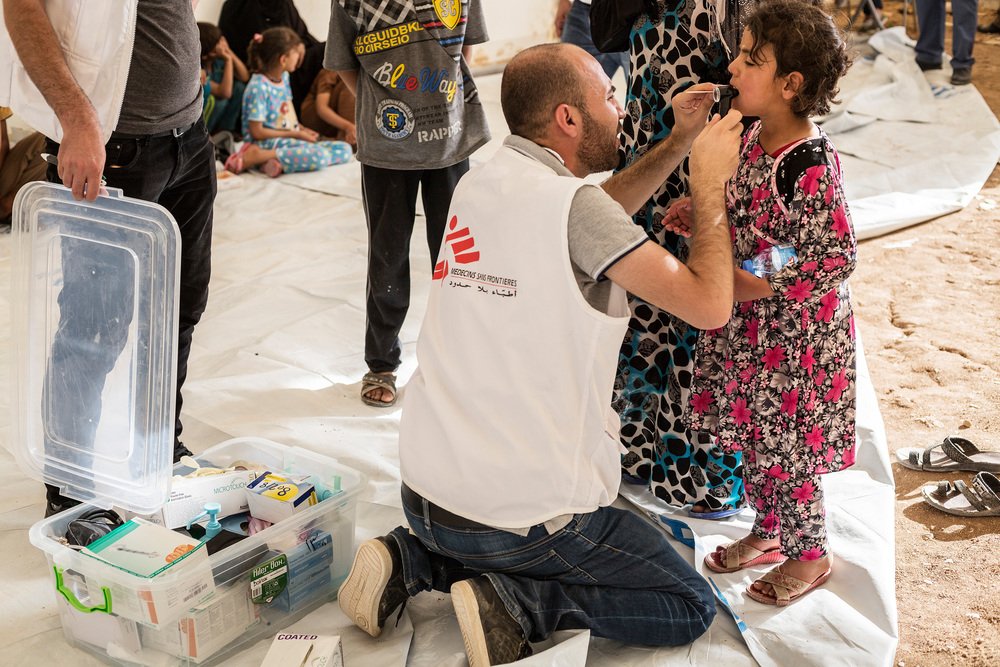 Giulio Piscitelli
The U2 refugee camp for internally displaced people fleeing from the violence in Mosul. MSF field staff treats a young child suffering from asthma.

They also provide care for children with malnutrition, as well as basic healthcare and mental healthcare in the camps established recently for people fleeing Mosul. In order to ensure its independence, MSF does not accept funding from any government or international agency for its programmes in Iraq, relying solely on private donations from the general public around the world to carry out its work.

* Names have been changed