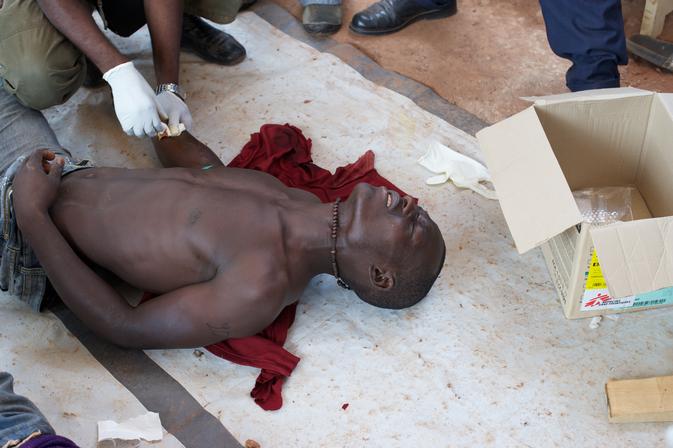 This content by Lara Marlowe originally appeared in The Irish Times

Christians in the Central African capital yesterday demanded the departure of the African peacekeeping force Misca, after Chadian forces fired in a Christian neighbourhood on Saturday, killing at least eight people.

The number of confirmed fatalities could rise. Médecins-sans-Frontières said 38 people were wounded, and Misca said three Chadian soldiers were hurt.

“Misca must leave,” Edouard Ngaissouna, a leader of the Christian anti-balaka militia told The Irish Times . “They protect the [rival Muslim militia] Seleka and shoot on our population.” Ngaissouna claimed his men did not fire on the Chadians, and that he “held them back” from retaliating, to prevent the militia being blamed for the deaths.

Misca commander Gen Jean-Marie Michel Mokoko, who is Congolese, told Radio France Internationale the anti-balaka fired on a Chadian brigade commander who was returning from a mission to confiscate weapons from the militia. Mokoko last week said “the anti-balaka are enemies” and would be treated as such.

Christians claim the Chadians have repeatedly practised “recon by fire” in civilian areas. They also accuse Burundian and Rwandian peacekeepers of being pro-Muslim. The neighbourhood’s inhabitants set up barricades in protest at the shooting yesterday.

Mathilde Ewatang (47) waited in the foyer of the community hospital for a bed. A bullet had pierced her shoulder and come out through her neck. “It was 3pm when the Chadians came through, shooting every which way. I threw myself on the floor of a shop, but they got me anyway,” she said.

Jovani Mbele (28), a cigarette vendor who was wounded in the head and foot, said the Chadians went through the neighbourhood on foot, shooting as they walked, after the French force Sangaris blocked their vehicles. “I’m in terrible pain,” Mbele said. “I didn’t sleep all night. They haven’t given me anything for pain yet.”

“All we want is peace and for the Chadians to go home,” said Jesué Wessia, who was visiting his wounded brother Salvador. “The Chadians come in and kill our families in front of the Sangaris. People are dying like animals.”

The CAR saw a large influx of Chadians when former president Hissène Habré was overthrown by Idriss Déby in 1990. Déby has long meddled in Chadian affairs. Chadian mercenaries comprised a significant part of the Seleka force that swept from northern CAR to Bangui between December 2012 and March 2013, when the Seleka deposed the former president Michel Djotodia.

“Central Africa for the Central Africans,” said Ngaissouna, the anti-balaka leader, echoing the Christian line that CAR’s problems are caused by Chad and Sudan, and that all foreign Muslims must leave the country.

More than 40 people have been killed in Bangui in the past week, including 20 in a grenade attack on a wake on Friday evening. The Red Cross said yesterday it may have to stop collecting bodies if its workers continue to be threatened.

This content by Lara Marlowe originally appeared in The Irish Times

Find out more about MSF's work in Central African Republic