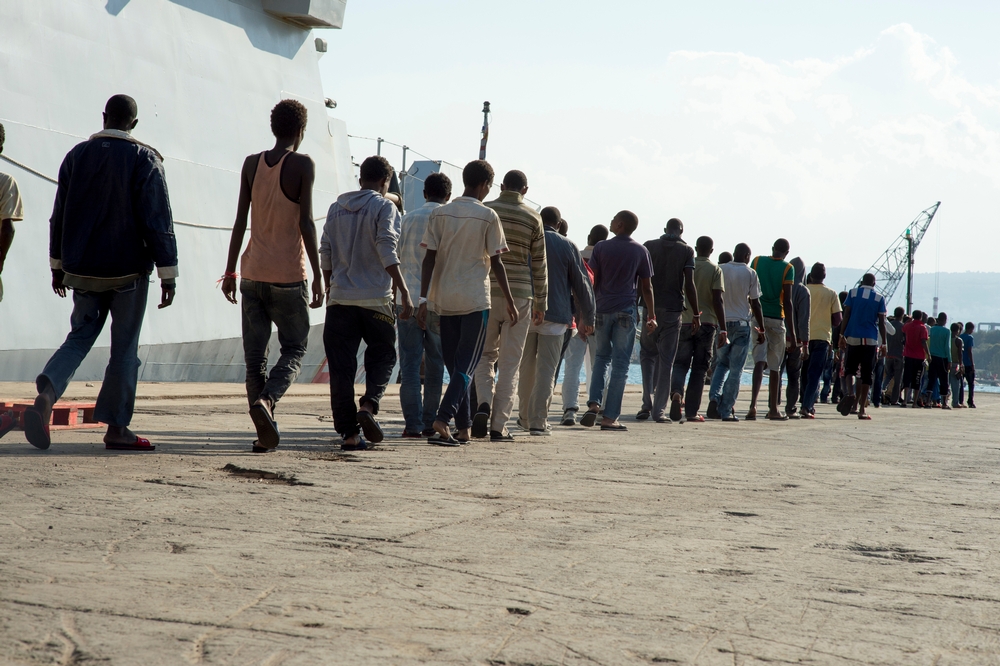 Italy and the EU must not abandon refugees at sea

Rome/Dublin, 2 October 2014 - One year after the tragic shipwreck off the island of Lampedusa in Italy, wars such as in Syria, protracted crises and chaos in Libya continue to push an unprecedented number of refugees to Europe.

As the patients MSF medical teams see in Sicily are increasingly more vulnerable, the European Union must continue active search and rescue operations to save lives in the Mediterranean said Médecins Sans Frontières/Doctors Without Borders (MSF) today.

Whilst conflicts around the world multiply, the EU continues to close its borders, leaving the sea as the only option for many to reach Europe and claim international protection.

MSF is providing urgent medical care and mental health support at two of Sicily’s largest landing sites, Augusta and Pozzallo, to thousands fleeing the war in Syria, persecution in Eritrea and abject poverty in Sub-Saharan Africa.

Worrying signs by Italian and EU authorities indicate the possible termination of Italy’s Mare Nostrum operation, whilst the announced EU “Frontex plus” mission may be more limited, for example only patrolling Italian territorial waters.

“As long as the desperate are forced to take this perilous route, Italy and the EU must stand up and respond to the humanitarian disaster unfolding on their doorstep,” said Stefano Di Carlo, MSF Italy Head of Mission.

“Thousands of lives would be at stake should international waters, where many tragic shipwrecks occur, fail to be actively patrolled.”

Ikram N'gadi
The arrival of mainly Syrian refugees a few hours after being rescued from the sea. MSF has set up a tent clinic at the port of Augusta, providing medical care to the new arrivals. The urgent cases are taken directly to hospital.

The Central Mediterranean route is the most dangerous of all the routes to reach Europe, not only due to the risk of dying at sea but also for the extreme violence often experienced along the way.

The patients that MSF medical teams see in Sicily are increasingly more vulnerable. Victims of violence and torture, disabled people, pregnant women, and children are fleeing for their lives, leaving behind conflict, persecution and poverty.

“In all the years we have provided medical care to migrants and refugees in Italy, we have never seen so many women and children,” said Di Carlo.

“They flee one danger straight into the arms of another on rickety boats they can only hope will bring them to safety. Many have suffered shipwrecks, witnessed people drowning, or lost their loved ones.”

The chaos engulfing Libya has funnelled thousands of people through to Europe, with 90% of arrivals departing from its coast.

Ikram N'gadi
Cissé from Ivory Coast was on the boat that sunk and took the life of 4 people. Just after entering the Italian territories around 11 am the boat started to sink. He hold on to a jerrycan before being rescued by the Italian Mare Nostrum search and rescue operation. “I thought I was going to die. When I saw the Italian boat I manage to go towards them and they gave us life jackets before taking us on board”

People working in Libya or using its coast as a jumping off point to reach Europe are especially vulnerable to its instability. Due to deteriorating insecurity, MSF was forced to suspend operations in Tripoli in mid-July.

“One 17 year-old Senegalese girl told us she was going to visit her parents in Libya where they were living and working, only to find that they had been killed,” said Di Carlo.

“She had no way to return home as the borders were shut, so she took a boat to escape the violence. Yet her trauma did not end there – the boat carrying her sank and she fears to ever see the sea again.”

Medical problems related to the journey

From January to August, MSF teams in Pozzallo conducted medical screening for nearly 19,000 people in 64 landings. The majority of people arrive in fairly good physical health conditions, as they are rescued early on by Mare Nostrum.

Most of the medical problems treated are related to the journey before the sea, such as traumas, skin diseases from lack of hygiene in detention centres in Libya, and respiratory tract infections. In August, MSF set up a clinic at the port of Augusta with 582 outpatient consultations in the first month, of which 71 people reported to have been victims of violence.

“Whilst the deadly shipwrecks in recent weeks demonstrate the obvious need for search and rescue operations in the Mediterranean, it is equally clear that people are risking their lives because there are no other safe and legal ways to reach Europe,” said Di Carlo.

“It is outrageous that sea rescue operations are needed in the first place. People should not have to risk their lives for a second time when they are already fleeing danger in their home countries.”

Ikram N'gadi
MSF has set up a tent clinic at the port of Augusta, providing 24 hour medical care to the new arrivals. The urgent cases are taken directly to the hospital upon arrival.

MSF in Italy and Greece

MSF has been working in Italy with refugees and migrants since 2002, particularly on the island of Lampedusa from 2002 to 2013. Today MSF supports the Italian health authorities by providing medical care to refugees, migrants and asylum seekers in the provinces of Ragusa and Siracusa in Sicily.

In Greece, MSF was working in the north of the country, providing medical and psychological care to migrants, refugees and asylum seekers in border police stations and detention centres until April 2014. MSF currently maintains emergency preparedness capacity to intervene whenever necessary in the country. MSF will soon begin providing medical care for victims of violence in Athens in collaboration with two Greek organisations.

Find out more about MSF's work with refugees