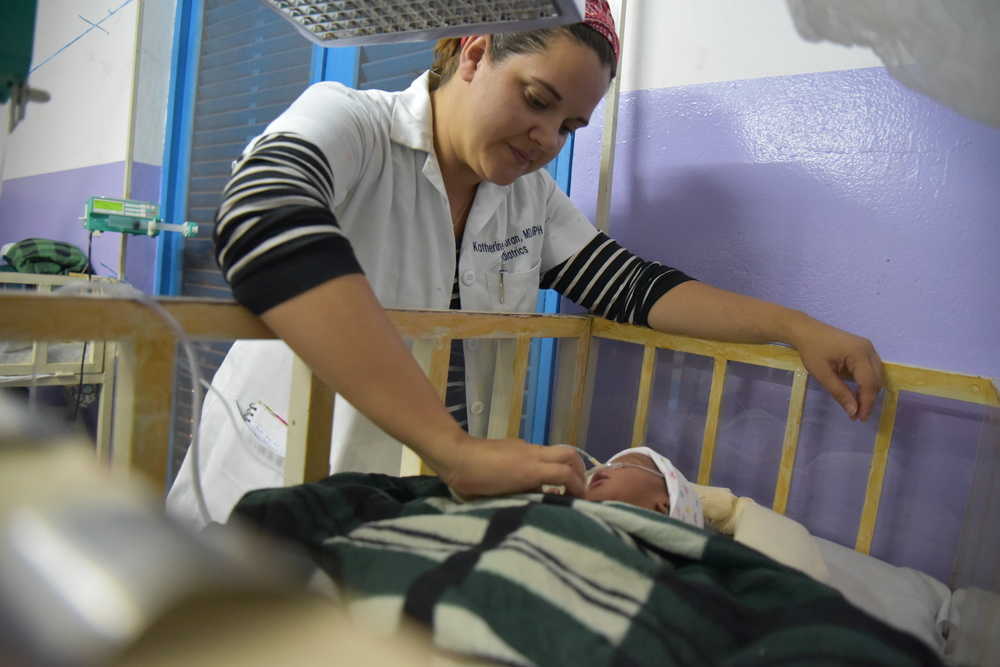 He doesn't have a name yet, but after just 48 hours of life, he's already a survivor. The baby boy's mother, Fatoumata, was barely 20-years-old. She had already given birth to twins over two years ago at home.

This time, once again bearing twins, she gave birth at home on the edge of Katiola town.

But the delivery was troubled.

By the time Fatoumata reached the hospital, the first twin had already been born but was suffering severe respiratory distress. His brother meanwhile, was stuck - awkwardly positioned in utero.

Despite all their efforts, the medical team was unable to save the first baby. After several hours, the mother too passed away.

The odds were stacked against the mother.

She had had no antenatal care, and when she arrived at the hospital she was too late, too sick, and had lost too much blood.

Her second twin, the survivor, has been admitted to the newborn intensive care unit. He is regularly attended by the neonatal team and visited each day by his widowed father.

Too many women dying during childbirth

“Fatoumata’s story is emblematic of the reasons why we are in Ivory Coast”, says Dr Gabriel Kabilwa, Médecins Sans Frontières's (MSF) medical focal point for the programme. “Here in the region of Hambol there are too many women every year just like Fatoumata, and newborns, who die during childbirth or soon after.

"The principal causes in the women are severe haemorrhage and eclampsia [a hypertensive disorder during pregnancy]. For the babies, the key cause is sepsis [severe general infection].

"Many maternal and newborn deaths are also the result of poor access to the level of care which would handle complications such as these.

"This type of care is too expensive, too far away, or just simply unavailable.

"That is why it is important to strengthen access to care in the most under-served areas of Hambol.”

To achieve better availability and quality of care for women in the region, MSF has partnered with the National Ministry of Health and Public Hygiene.

So far this is happening in Katiola hospital and three primary healthcare centres (PHCs).

“These are the physical links in our continuum of care," explains Romain Jacquier, programme coordinator in Koutiala. "It starts with monitoring pregnancy before delivery.

"It then progresses through maternity care at the time of childbirth, management of obstetric emergencies, and neonatal care when the baby has been born too small or suffers complications.”

In 2017, our objective is to double the number of PHCs supported by the partnership and to help renovate Katiola's long-standing mother-and-child health centre.

Early in the morning, Albertine is referred from Dabakala to Koutiala hospital, more than 80 km away.

“She needs to have her baby delivered by caesarean section because her baby is bigger than her pelvis," explains obstetrician-gynaecologist Dr Rasha Khoury before the operation begins. "This is a potentially life-saving intervention.

"If her labour prolongs, she risks a uterine rupture or dystocia [obstructed labour]. Both could cause serious future complications for her.

"She has already had a caesarean for her first baby, and she took traditional medicine to accelerate the birth this time.

"In fact, this combination has already caused a partial uterine rupture.”

One hour after surgery began, Albertine is out of trouble.

Her newborn survived but had to be resuscitated by a paediatrician and midwife, because his small lungs were filled with meconium [a baby’s first faeces].

He is under care in the neonatal intensive care unit.

Rasha explains, “Without the quick referral from Dabakala, the emergency obstetric services here in Koutiala hospital, the trained staff, the blood bank and the newborn unit - mother and baby would have not survived.”

our work in the Ivory Coast >