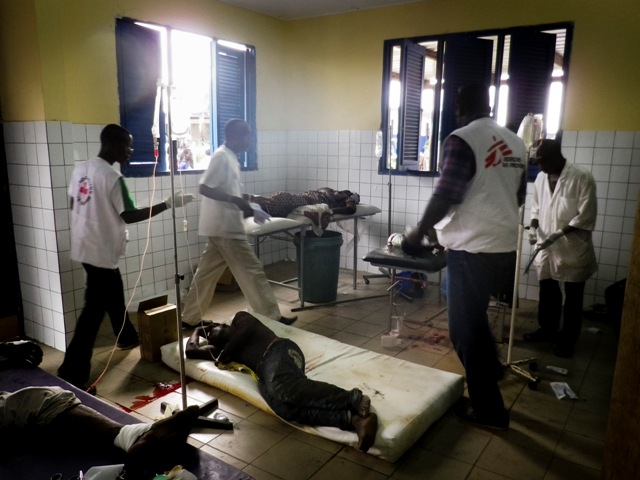 The international medical humanitarian organization Médecins Sans Frontières/Doctors Without Borders (MSF) called today on the warring forces in Ivory Coast to take all necessary measures to ensure that people can safely reach medical facilities and that MSF medical teams can travel freely in the city of Abidjan and other parts of the country affected by fighting.

An MSF team in Abidjan has been trapped at the Abobo Sud Hospital since March 31 due to the extremely dangerous conditions, which have severely restricted travel within the city. Together with the Ivorian health authorities, the MSF team is treating between 30 and 40 wounded people daily -- those who are near the hospital and manage to get there on their own or by cart with the help of neighbours.

"We get telephone calls asking us to come pick up wounded people and patients, but it's impossible to move around," said Dr. Salha Issoufou, MSF head of mission in Abidjan.

Abobo Sud is the only hospital still functioning in the northern half of the city. A system for transporting wounded to the hospital had been set up, but gunfire and looting prevented its implementation. Ambulances cannot move in the city.

The paralyzing violence is also preventing MSF from resupplying Abobo Sud with drugs and medical materials. "If this continues for a few more days, the hospital will run out of anaesthesia, sterile compresses, and surgical gloves," Dr. Issoufou said.

On April 3, thanks to the efforts of the Ivoirian Red Cross, an MSF team was able to provide the Treichville University Hospital Centre in southern Abidjan with materials for treating the wounded. However, the overall needs are enormous and many public hospitals that have received MSF donations can no longer be resupplied because of the violence. Patients with chronic illnesses, among them people who need dialysis treatments, are already in danger.

Grave concern for civilians in West

The situation in the western part of the country is also chaotic, inter-communal tensions there have aroused grave concern.

MSF is calling on the authorities to do everything in their power to ensure that the country's civilians are not targeted by violence. MSF teams in the western towns of Bangolo and Duékoué treated large numbers of wounded patients between March 28 and April 3 (146 at Bangolo Hospital and 285 at the Duékoué facility).

"New wounded patients continue to arrive, even though the offensive in this area has ended, which suggests that violence is continuing," said Renzo Fricke, MSF emergency coordinator.

Tens of thousands of people have fled fighting in the west, heading as far as neighbouring Liberia.

Duékoué, where neighbourhoods were recently ransacked, is home to a camp housing 15,000-20,000 displaced persons. While MSF is providing medical care at the camp, residents need considerable quantities of food and water. MSF teams are also treating people in Man, Danané, and Guiglo, as well as inside Liberia.