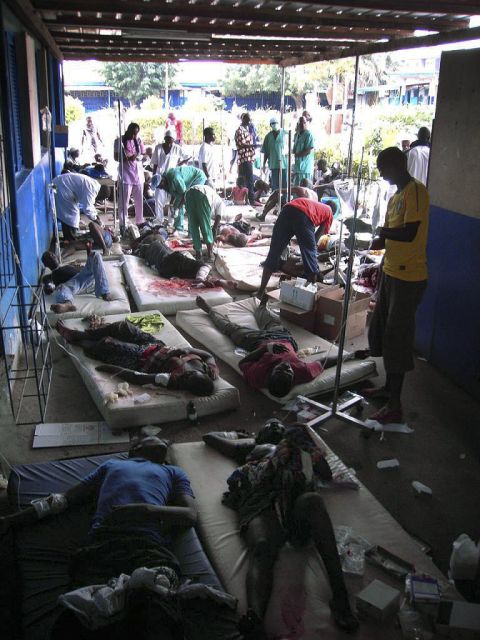 Issoufou Salha, MSF Head of Mission in Abidjan, explains the difficulty in treating patients amidst the violence in Abidjan and in the West of Ivory Coast.

How do MSF teams manage to work in Abidjan?
We have been stuck in the offices and at the hospital for the last three days. We can hear gunfire, there are blockades on the streets, and the violence continues. The situation is extremely tense and we cannot get out. No cars can move. This morning five wounded arrived very near our offices; we have been able to treat four but the fifth patient died.

Despite these obstacles, MSF continues working. Another MSF team working in the Abobo Sud hospital has been providing care for 72 hours non-stop. In partnership with the health authorities the team treats patients with urgent medical or surgical needs. But we cannot go there to change personnel or deliver drugs. Our pharmacy is in the south of Abidjan and our hospital in the north. Yesterday and the day before, the team treated 97 emergency patients, including 75 with bullet wounds. Injured people came by themselves or were brought to the hospital by neighbours on carts as ambulances are not running. The situation in terms of accessing patients remains very worrying.

What problems do hospitals in Abidjan face?
The Abobo Sud hospital is the only one functioniing normally in the northern neighbourhoods of the city: Abobo and Anayama. That’s where all the patients with urgent needs go. There is also Abobo Nord hospital, but it has only one surgeon and no anaesthetist. And similarly to others parts of Abidjan and in conflict areas, many health staff fled because of insecurity.

Hospitals that are open in other neighbourhoods in Abidjan are struggling because of a lack of drugs and food. Since December, MSF has been providing drugs to different university and state hospitals because the economic sanctions disrupted the normal supply system. But we have not been able to deliver any anaesthetics or consumables for surgery since the beginning of the week. Furthermore, food is now lacking for patients. Shops in Abidjan are closed or have been looted.

What is the situation for displaced people in Abidjan?
In Abobo and Anyama, the northern neighbourhoods of Abidjan, there are 11 sites for displaced people where between 10,000 and 12,000 have sought refuge from other parts of the city. People in those sites receive practically no aid at all.  Individuals have given them bags of rice. MSF donated bandage kits to private health centres and clinics in the area. We were also getting ready to provide consultation, but it is impossible at the moment. The problem in Abidjan is that we cannot move around, reach our drug stocks, or bring our orders into town.

Ivory Coast 2011 © Didier Assal/MSF
Ivory Coast 2011 © Didier Assal/MSF
MSF is also working in Guiglo in the West of the country. What is the situation there?
An MSF team is based in Guiglo where it provides primary health care. It also refers patients who need surgery to the town of Bangolo where MSF is also working. Guiglo hospital was looted but considering the circumstances we have had to treat seven patients there anyway. The situation is now calmer in Guiglo, but it is not the case in other western regions.
The team also provides consultations in a clinic in Guiglo as well as a displaced camp near a church. But people need more support including water supply and latrines. More than a thousand people have sought refuge there, many of whom arrived in the beginning of the week, but others keep arriving. Population movements are ongoing in the west of the country.

There is a big camp for displaced people near the Catholic Mission of the town of Duékoué. The population increased fourfold in the space of a few days. The MSF team has been able to resume its consultations in the camp as well as one in one neighbourhood of the city. Between 29th March and 1st April, another MSF team treated 240 wounded in very difficult conditions at the General Hospital.