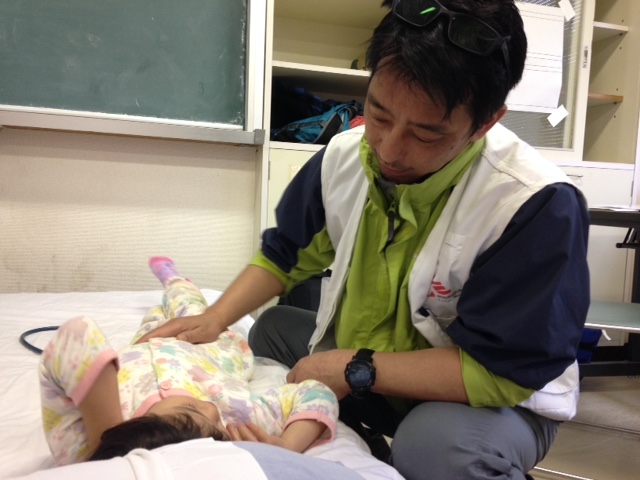 It has been almost a week since the earthquakes, but the ground still shakes now and then in Kumamoto and Oita prefecture.

Due to heavy rains on 21 April and the subsequent risk of landslides, some 240,000 people have been advised to evacuate 19 cities, towns and villages in Kumamoto and Oita.

A Médecins Sans Frontières/Doctors Without Borders (MSF) team travelled to Kumamoto prefecture on 17 April and identified a severe lack of basic healthcare in Minami-aso village. Houses and medical facilities were severely damaged and people have been living in shelters since 14 April.

On 20 April, we visited temporary shelters set up in the village to assess their hygiene conditions and to get first-hand accounts of the current situation. The team made suggestions for improvements to the shelters.

With no paediatricians in the Minami-aso area, we have also begun providing paediatric care. One of shelters visited by our team was in Minami-aso Nishi Elementary School, where five families with young children are currently staying.

“It’s reassuring to know we have a paediatrician here,” said a mother of two young children who was visiting her hometown from the UK when the earthquake struck.

In the Hakusui local government office in Minami-aso, MSF supported another organisation in the opening of a clinic, based on our experience responding in emergencies.

The clinic opened on 20 April and shelters in the surrounding area were notified.

The MSF team working in the area hit by the Kumamoto earthquake is made up of three doctors, three nurses, a pharmacist, a psychologist, a logistician and an administrator.

Find out more about how we respond to natural disasters