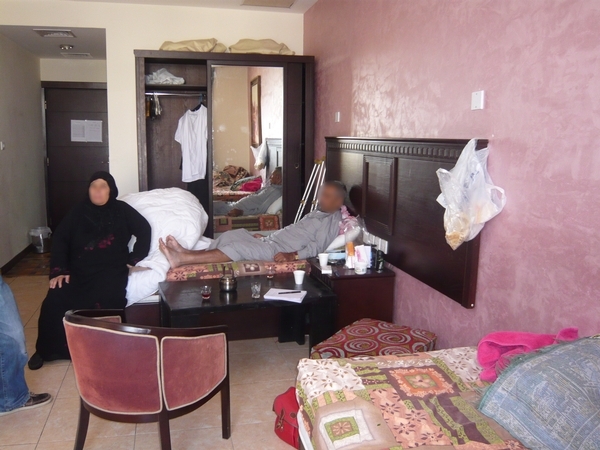 On the road leading to the border crossing in Ramtha, a string of cars are parked along the hard-shoulder, waiting for the refugees to pass. Syrians are arriving in Jordan every day. Whether they follow the standard route or a more roundabout one, they end up in one of the refugee camps set up in Ramtha.

M. crossed the border at night with his family. They had a long trip from Homs, in western Syria. M., his wife (seven months pregnant) and their four children took a bus to Damascus and then a taxi, paid for by others. The last part of the trip – crossing the border – was made on foot.  Now they are waiting in the Beshabshe camp in Ramtha. As soon as someone agrees to sponsor them, they may leave. They will probably head to Amman and settle there. The Jordanian capital is only 70 km away.

I was there for a half-hour - it was too dangerous to stay longer. I haven't received any further treatment."

An MSF doctor has come from Amman to determine whether any of these new arrivals are wounded and need orthopedic surgery. MSF has a specialized surgical team that performs operations in a hospital in the Jordanian capital. The refugee camps in Ramtha are more like transit camps and the Syrians generally do not stay very long. Dr. Mohamed visits the camps every two or three days. He gives the wounded patients he sees that day, including M., his telephone number so that they can contact him when they reach Amman and arrange to be seen.

"The wounded people we see here have already received urgent care in Syria," he says. "They usually have old wounds that date back several weeks or months. On the other hand, there are also people who are in a very serious condition but remain inside Syria and can't make it here."

Other cases are arriving. X., 25, lifts his polo shirt to show the angry purple-red marks on his back.  His arms also bear lacerations from rubber cables. He was arrested while participating in a demonstration in Deraa. He says he was tortured in prison, where he remained for 17 days before being transferred to Damascus by convoy. He was freed en route during an attack by the Free Syrian Army and immediately set out for Jordan.

Dr. Mohamed delivers the same message to all these young wounded men: they can come to Amman and see an MSF surgeon, who will determine whether surgery is possible.

Initially, the MSF team in Amman performed only reconstructive surgery, treating victims of violence from Iraq, Libya, Yemen and other countries.  However, a growing number of Syrians with bullet wounds has been arriving since the revolt broke out in their country. As a result, MSF has strengthened its orthopedic surgery team, which operates on upper and lower limbs. The surgeon examines five to ten patients weekly. On average, one-third require orthopedic surgery. Another third receive physical therapy and the remaining third are monitored. X-rays are performed regularly to observe their fractures.