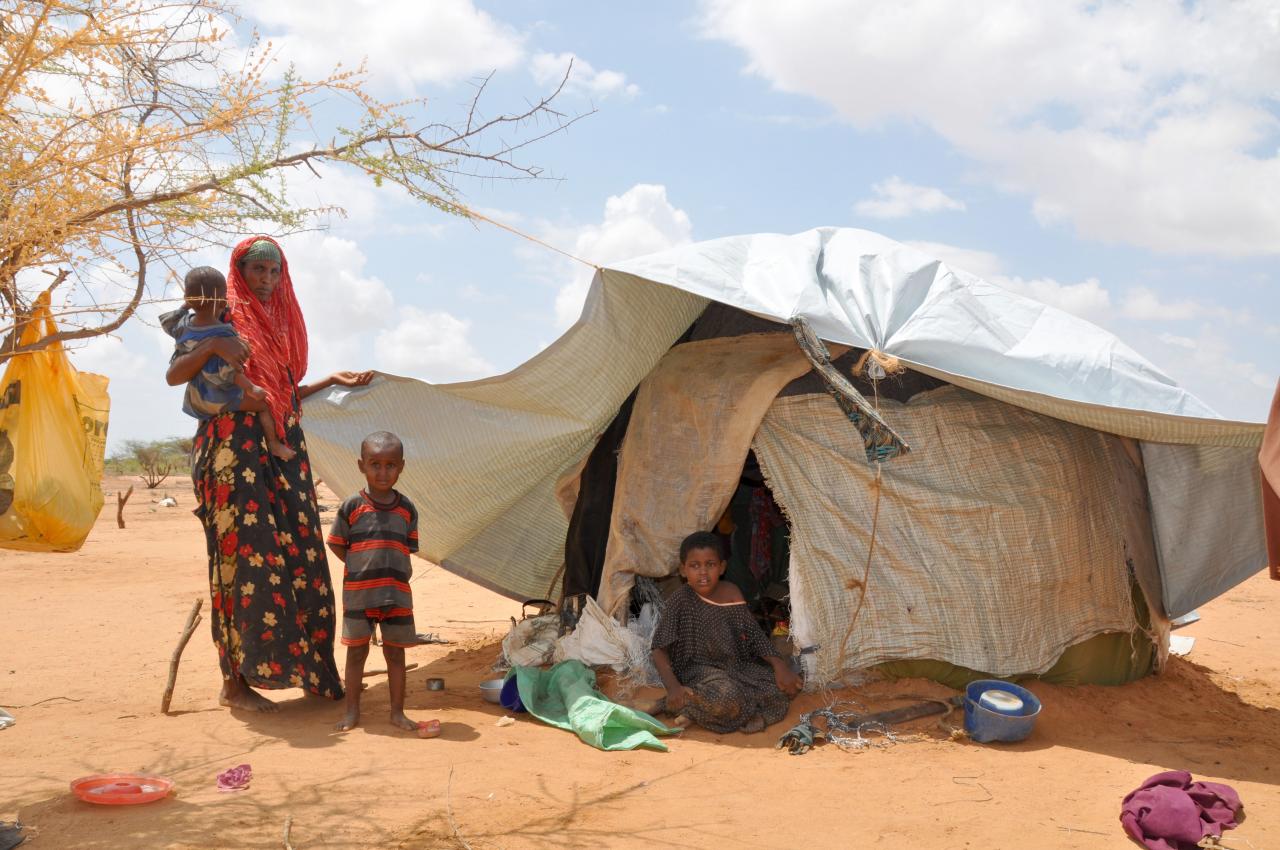 Kenya: The Biggest Refugee Camp in the World is Full

Stranded in the desert of Kenya’s northeastern province, surrounded by mile upon mile of sand and scrubby bushes, 30,000 people are living in makeshift shelters under a burning sun. The families – having crossed the border from neighbouring Somalia, 80 km away – are headed for the refugee camps of Dadaab. But the three camps in the Dadaab area are already full, and there is nowhere for them to stay.

Watch a BBC News report from Dadaab, in Kenya

View a photo story of what life is like in Dadaab

On arrival, the refugees – most of whom are women and children – have no money, no food, no water and no shelter. It takes 12 days, on average, to receive a first ration of food , and 34 days to receive cooking utensils and blankets from the UN’s refugee agency, the UNHCR, which runs the camps. Until then they have to fend for themselves in a hostile environment.

In temperatures of 50 degrees, and fearful of attack by hyenas, the families are building fragile shelters in the desert on the camps’ fringes. They use whatever materials they can find: mostly branches and brushwood, tied together to form domed structures, which they cover with cardboard, polythene or torn fabric – anything to provide some shelter from the unrelenting sun and the choking dust.

A camp the size of a city

The camps of Dadaab are surrounded by barren desert. The three camps – Dagahaley, Hagadera and Ifo – known collectively as the ‘biggest refugee camp in the world’ – were established 20 years ago to house up to 90,000 people escaping violence and civil war in Somalia. With no end to the conflict in sight, there are now more than 350,000 people  crowded into the camps’ perimeters, while the number of new arrivals is surging. This year, 44,000 new refugees have already been registered, and by the end of 2011 the camps are likely to be home to 450,000 people , twice the population of Geneva.

As more and more people crowd the camps and the surrounding desert, the availability of essential services – such as water, sanitation and education – is shrinking, and living conditions are getting rapidly worse.

An extension to one of the camps, known as Ifo Extension, which has space for 40,000 refugees and could provide a temporary solution to providing shelter for new arrivals, lies half-built and empty due to a breakdown in negotiations between the Kenyan authorities and the UNHCR.

"We brought nothing but the clothes we were wearing’

Mahmoud arrived the previous night with his wife, five children and widowed mother. They are staying with his sister, in the desert shelter where she has been living for the past three months. He says: “Our journey took nine days. We brought nothing with us but the clothes we were wearing. In Somalia we were farmers, but all of our animals died in the drought. While there was no fighting in our town, a group of militants were in control and were demanding that we pay them taxes. I couldn’t pay, and that’s why we decided to leave. I was terrified of being stopped on the journey and being preventing from crossing into Kenya. On the way, we had to hide.”

The borderlands are a lawless and dangerous place, and many refugees encounter violence, extortion and harassment as they travel through –they are an easy prey.

When they finally arrive at the camps, most of the new refugees are in a poor physical state. The health system in Somalia is in a state of near-collapse, and the majority of people have been living without conventional medical care for years. The drought has made the health situation worse, and many people are in need of urgent medical attention. As the number of new arrivals grows, pressure on the camps’ health services is mounting.  “More refugees are on their way,” says MSF nurse Nenna Arnold. “We are already at bursting point, but the figures keep growing. This situation is a humanitarian emergency.”

Arnold is in charge of monitoring the health needs of the new arrivals. She is supported by a team of 78 community health workers, who are all Somalis. Every day, she and her team go out into the camp and the surrounding area to find the people who need medical treatment. The sickest – including a large number of children with moderate and severe malnutrition, often with medical complications – are driven straight to one of MSF’s health posts or to the busy general hospital that MSF runs in Dagahaley camp.

The needs of these new arrivals are growing so fast that MSF is rushing to bring in additional staff and resources. Last month, staff at the health posts gave 11,963 consultations. They are seeing large numbers of patients with respiratory tract infections, diarrhoea, tuberculosis, malnutrition and trauma, and an increasing number of complicated cases. A new health post was opened in March, in the middle of the area where the newcomers are settling, which is already doing an average of 110 consultations a day. MSF has taken on more than 50 extra staff since October, bringing its total number in Dagahaley camp to 458.

A massive 40 percent of the children who have arriving have never received vaccinations, which – combined with their nutritional status and poor living conditions – represents a major health threat. Flash vaccination campaigns – some of them held in the desert, under the shade of a tree – are helping to forestall outbreaks of disease.

The pressure is also mounting at MSF’s 170-bed hospital, in the middle of Dagahaley camp, where international, Kenyan and Somali staff provide free medical care. It is the only functioning hospital for the 113,000 refugees in the camp, as well as increasing numbers of refugees camped in the desert. Dr Gedi Mohammed, the hospital’s director, says, “Until recently bed occupancy was 80 percent on average, but – with the new arrivals – we are now seeing occupancy rates of 110 percent”.

The maternity ward is seeing double the number of births compared to this time last year, with 308 deliveries in the past month alone, and extra beds crammed into the aisles. The inpatient therapeutic feeding centre, for severely malnourished children with medical problems, is so full that tents were initially set up in the hospital grounds, while in May a new 60-bed extension ward opened to accommodate them all. There are 80 malnourished children receiving inpatient care, and a further 782 in the outpatient programme. More than 7,000 families are receiving extra food in the supplementary feeding programme. Many of the new arrivals are traumatised by their experiences, and the mental health programme is busier than ever, with 964 patients receiving mental health support in the past month.

MSF has been providing medical care in Kenya since 1992, and has worked in the camps at Dadaab for a total of 14 years. Since 2009, MSF has been the sole provider of medical services in Dagahaley camp, providing healthcare for the camp’s 113,000 residents at five health posts and a 170-bed general hospital. Read MSF's Full Report 'No Way In' Focus on Dadaab here