Libya is not a safe country. We hear that a lot. It has been proven time and time again. Yet I still believe many people do not grasp the true meaning of it.

No rights for refugees and migrants

In December, around Christmas time, the MSF medical team received a phone call: there was a woman in the emergency room at Tripoli University Hospital, she’d been there for two days already, had received some basic supportive management and undergone some tests, but the doctors there could not admit her due to lack of documents and no next of kin. 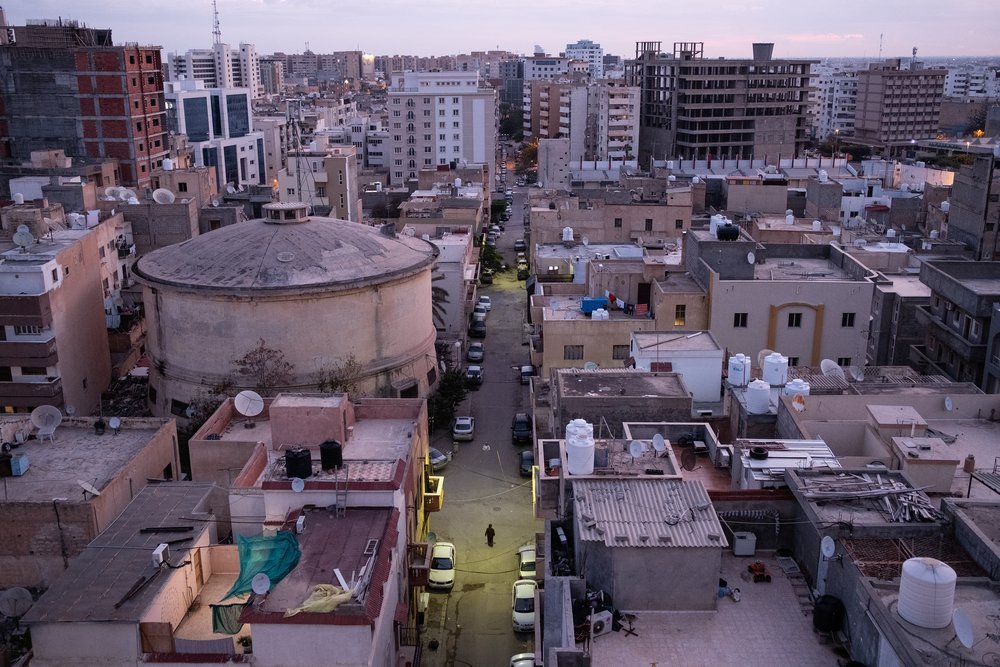 They asked MSF to assist. We took her to the referral clinic and transferred her to intensive care almost immediately. But her condition was dire, our doctors saw that not much could be done to save her.

After few days, she passed away. We never knew where she was from or who she was. 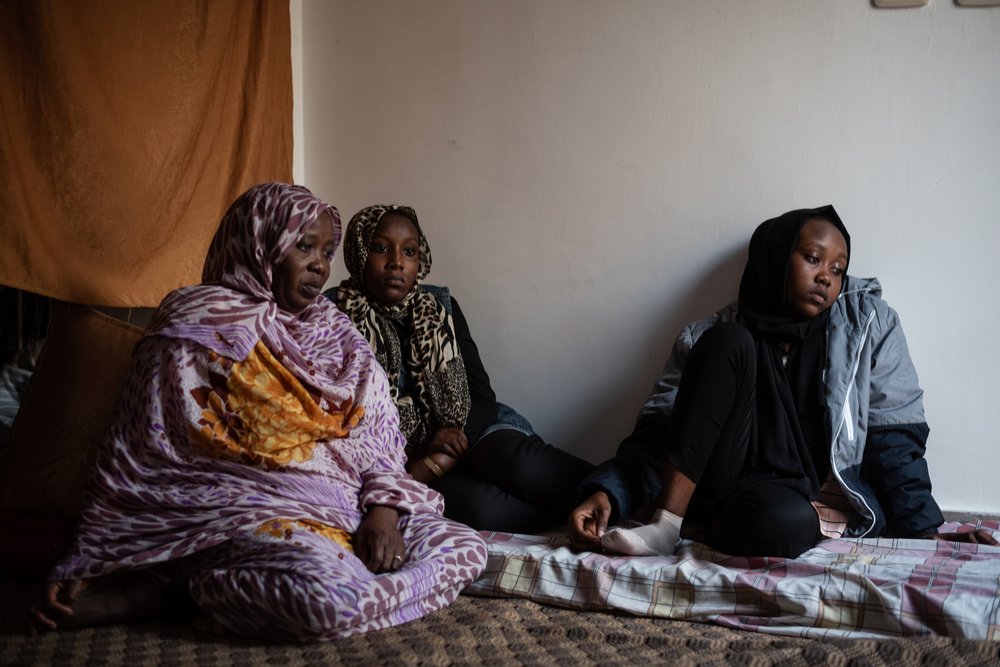 Giulio Piscitelli
Mrs Awaia and her daughters say once they arrived in Libya they were detained in a clandestine place of detention until a ransom was paid by friends. They say the facility was run by militia men linked to traffickers.

We couldn’t even call her family to tell them she had died and our staff had to assume the responsibility for the release of the body.

Many refugees and migrants in Libya, if not most, have no rights. They cannot live a normal life.

If criminals target you, you can’t go to the police as they might end up arresting you.

If your employer decides not to pay you, there is nothing you can do about it. As you walk back home from work, tired and frustrated, you might be arrested and taken to a detention centre. 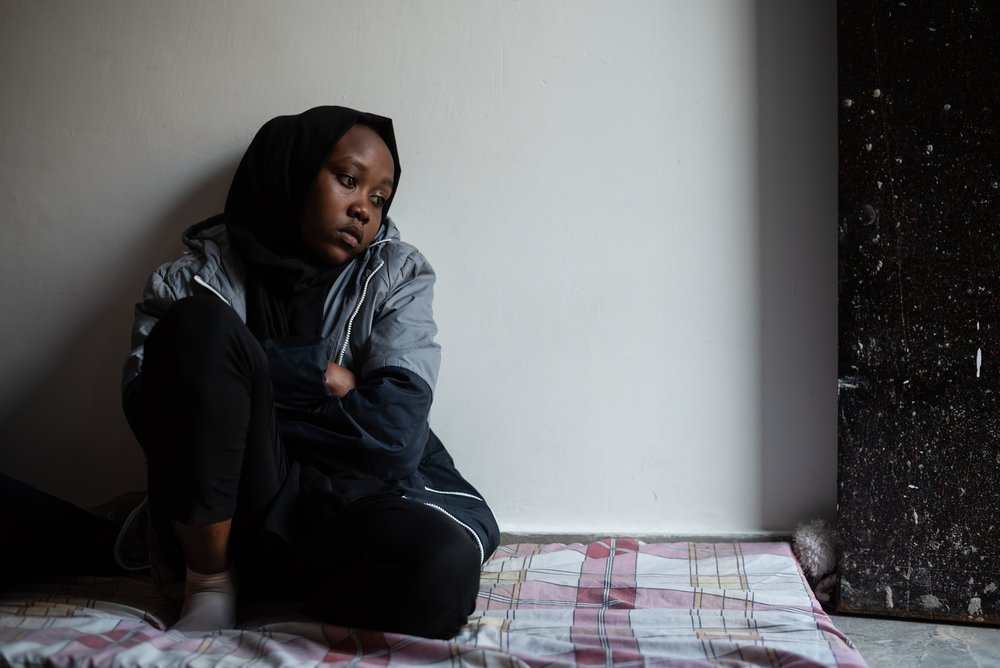 Giulio Piscitelli
Laia, the 13-year-old daughter of Mrs. Awaia, a refugee from Darfur Sudan, sits on a mattress on the floor of their precarious accommodation in Gargaresh. Mrs. Awaja lives with her two daughters in a small unfinished house.

This is what happened to 17-year-old Hasan. When I met him, I felt his eyes were full of angst, but he was staring at his feet and probably did not want to show it. 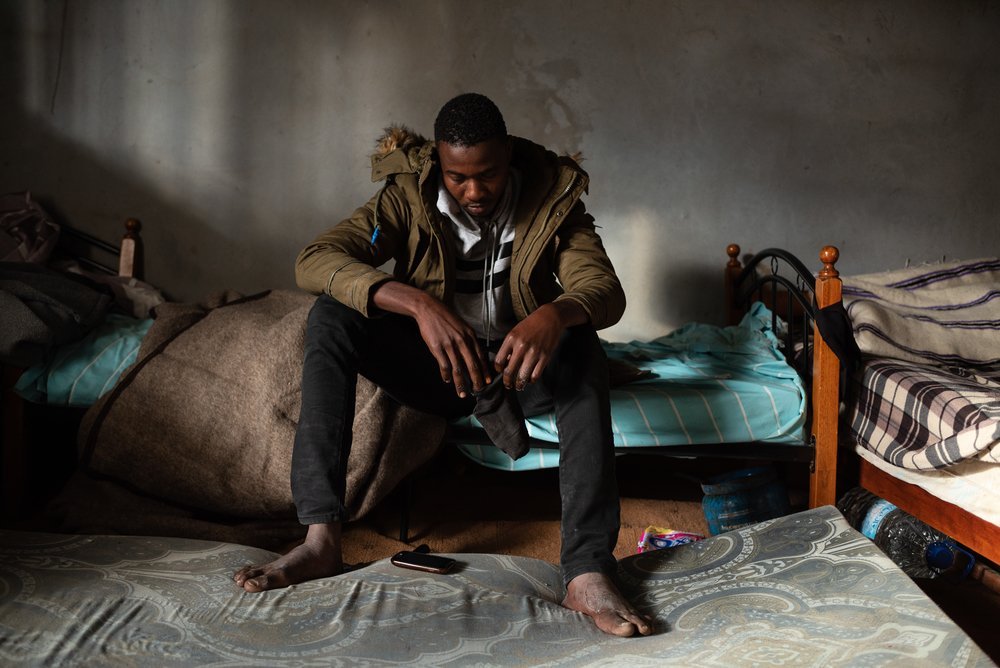 Giulio Piscitelli
Hasan, a 17-year-old refugee from Darfur, Sudan arrived in Libya one year ago. He says he has been arrested and detained in detention centres.

“I have travelled through lots of places in Africa, but never have I seen a white man being treated like white people [Libyans] treat black people here in Libya or at sea."

"We eat on the floor; on the very floor where we sleep; in the same room where we go to the toilet. It is disgusting. What person would force another to live like this?” 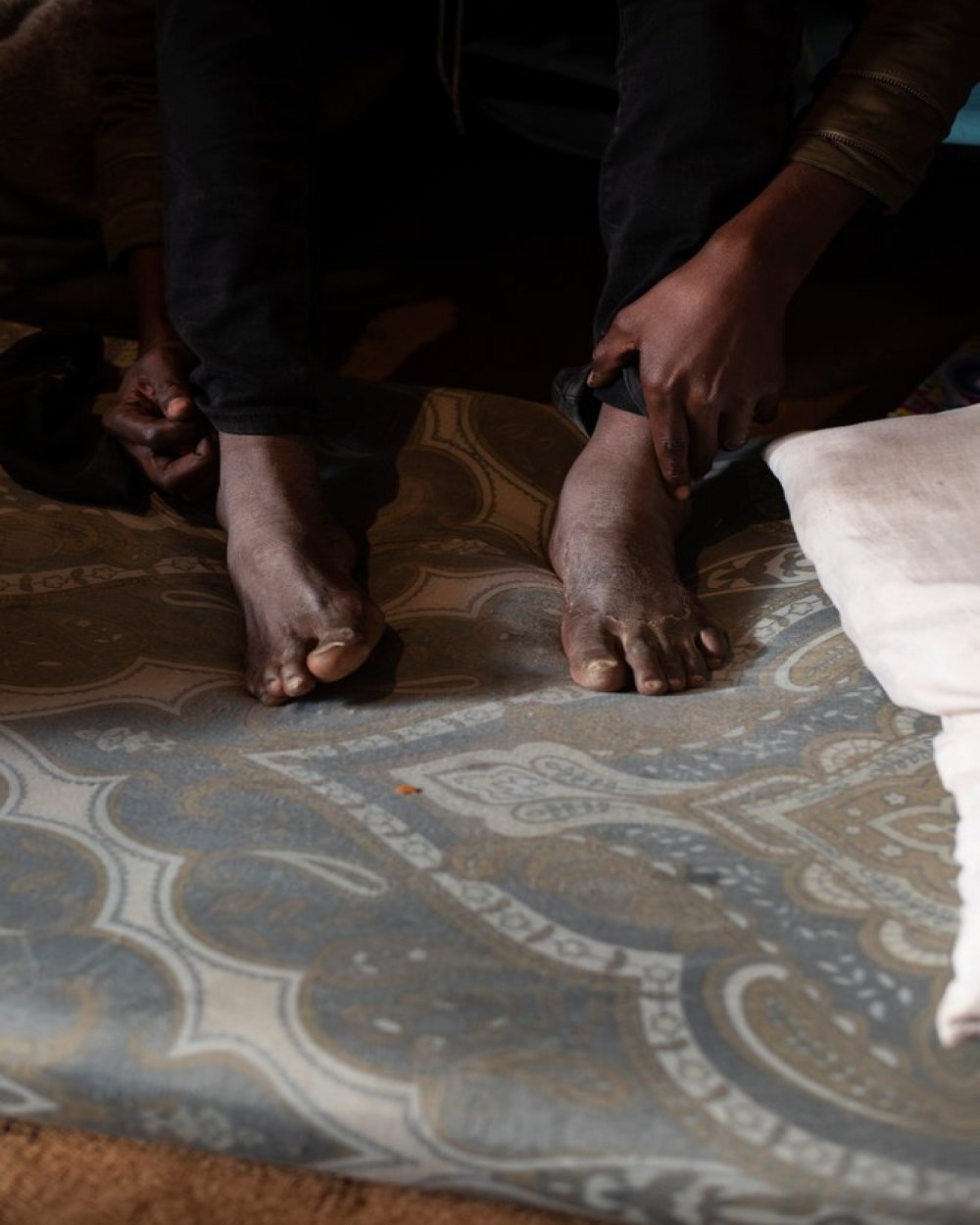 Giulio Piscitelli
Hasan broke both his feet while trying to escape from Tajoura Detention Centre, and says he was heavily beaten by the guards after he was caught. Since that day, he can’t wear shoes and can’t work.

His hands are so dry the skin falls off. I ask him what happened and he tells me it is from hard manual work.

He came to Libya to work, to send money back home to help his family. Unfortunately, too often in the last year he would work and not get paid.

Fear is a common feeling

He told me he did not feel safe even where he lives. He says he sleeps fully dressed because criminals come to rob them at night. For people like Hasan, Libya is lawless. 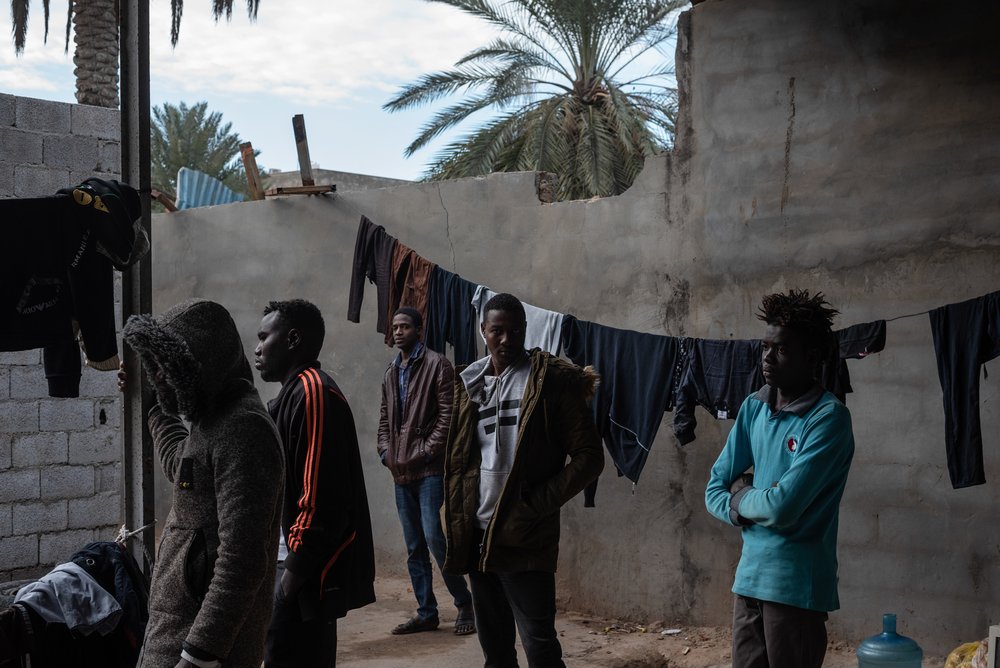 Giulio Piscitelli
Refugees mostly from Darfur, Sudan are gathered in the courtyard of the place where they live in Gorgi district, south of Tripoli. Refugees are often living in dire conditions, in dilapidated buildings or small unfinished houses.

I have heard similar stories many times, especially in the neighbourhoods of Tripoli where refugees and migrants try to live normal lives.

Criminal gangs and militias systematically target these communities. There is not much to steal, but people often tell us you can be killed just for a phone. Fear is a common feeling.

Osman shared this with me the first time I met him. He is a young boy with a broad smile. He left Somalia because of the war.

He was looking for a safer place and he decided to travel to Europe. But the night he was waiting to board one of the unseaworthy boats in Tripoli, the police raided the smuggler’s house.

They chased Osman and he fell from the first floor of the building. He has been unable to walk since then.

Now, he is stuck in a run-down building in Gargaresh, in a tiny dark room that looks more like a cave. “When the thieves come, everybody runs away, but all I can do is to hide under the blankets, hoping they will not see me.” 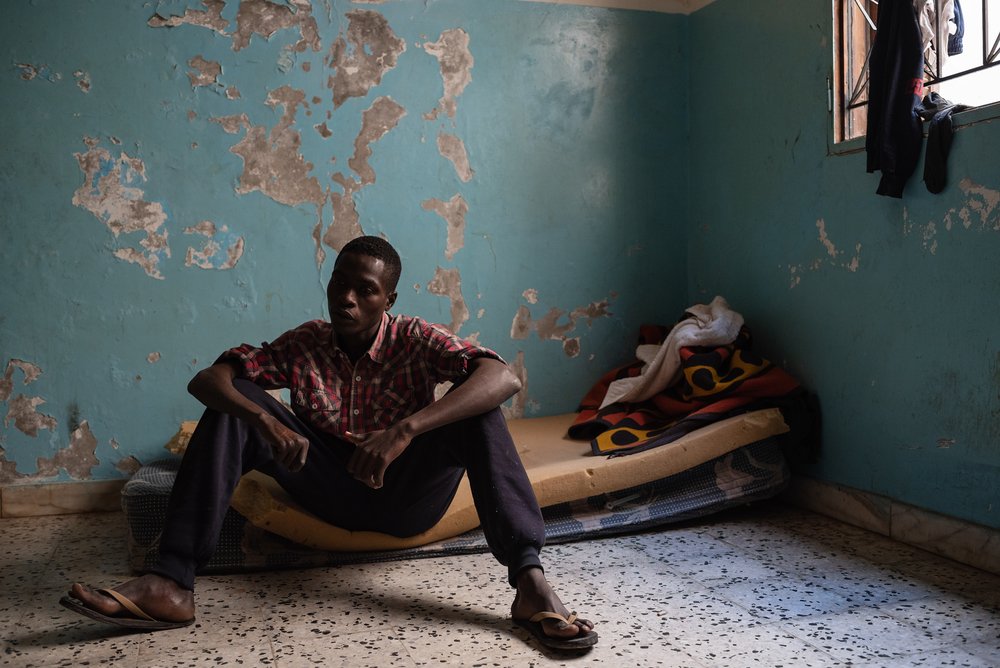 Giulio Piscitelli
Mustapha, 17-years-old from Darfur, has been in Libya for two years. Mustapha is one of the survivors of the Tajoura detention centre bombing from July 2019, which killed 53 people and injured an estimated 130 others.

Hasan and Osman, like many others, made the decision to cross the Mediterranean Sea.

Along with over 15,000 people in 2020 and 2021, they were intercepted by the Libyan coastguard and forcibly returned to Libya, where many were locked up in detention centres. 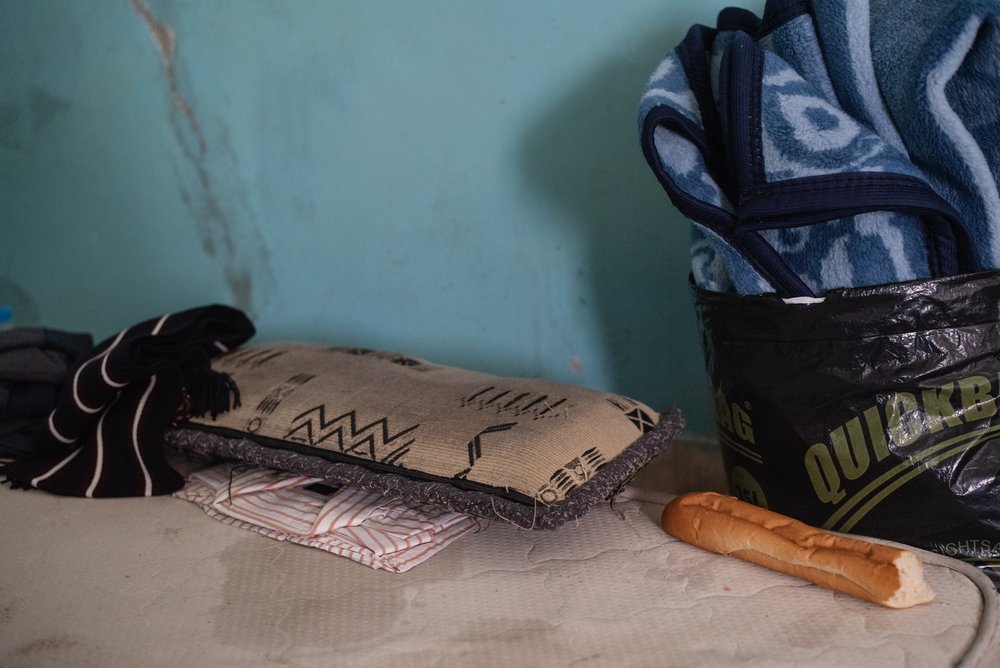 Giulio Piscitelli
A few personal belongings of a refugee on his bed in a shared room where sleeps with nine other people, all from Darfur, Sudan.

The first time I entered a migrant detention centre in Tripoli, I saw something familiar.

One of the walls in the hangar MSF uses for medical consultations had a number of stickers on it from the Italian Agency for International Cooperation. 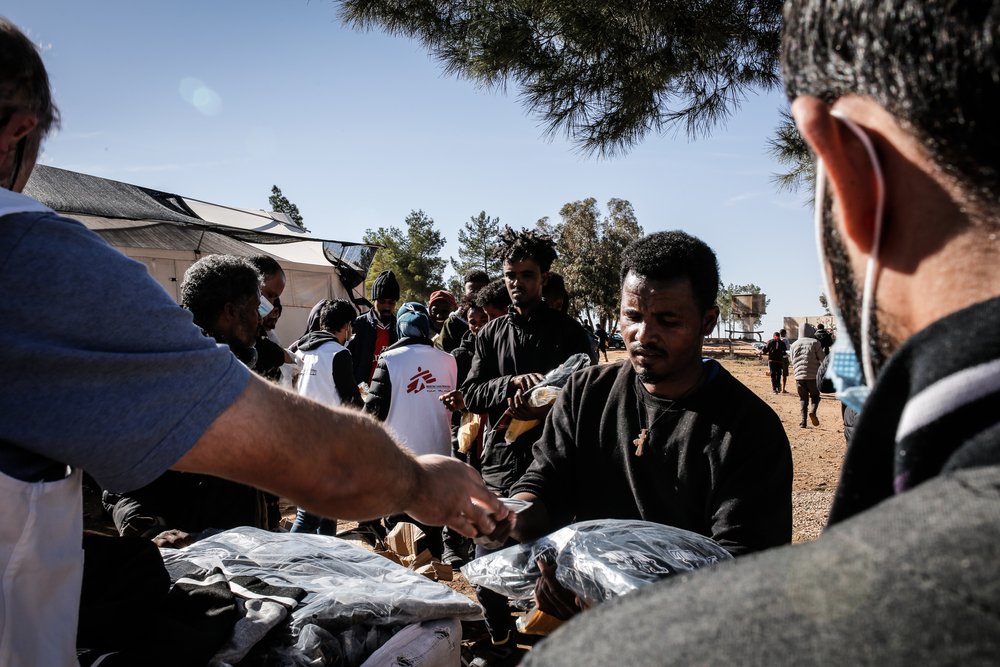 The stickers read, ‘Aid 11242/01, Towards Sustainable Immigration’. My Libyan colleague smiled (or at least I think she did, we were wearing masks) when I told her how ashamed I felt that my taxpayer money had ended up in this place.

But then she got more serious and said she was also ashamed that this detention system was happening in her country.

In the main hangar, where people are kept, the only light that enters is from high-up windows, close to the ceiling. Most of them are broken, but they are up there, useful only to let in the cold and the rain rather than to provide any proper ventilation. 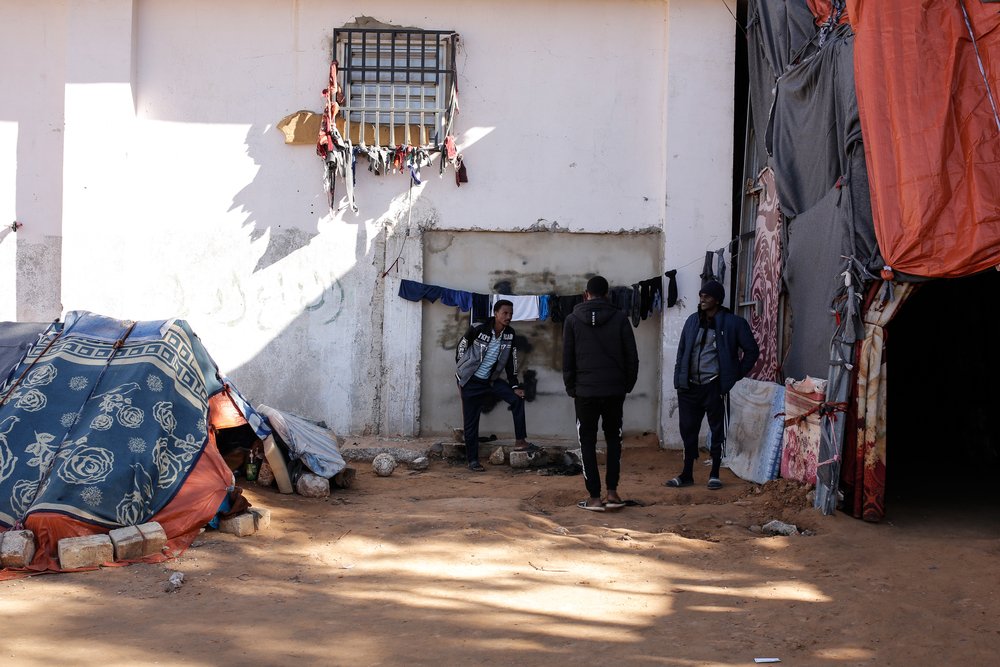 I entered the main cell with MSF medical team to distribute Plumpy’Nut – a high calorie peanut paste we usually give to malnourished children.

We distribute it to adults in the detention centres because we know they don’t receive enough food. 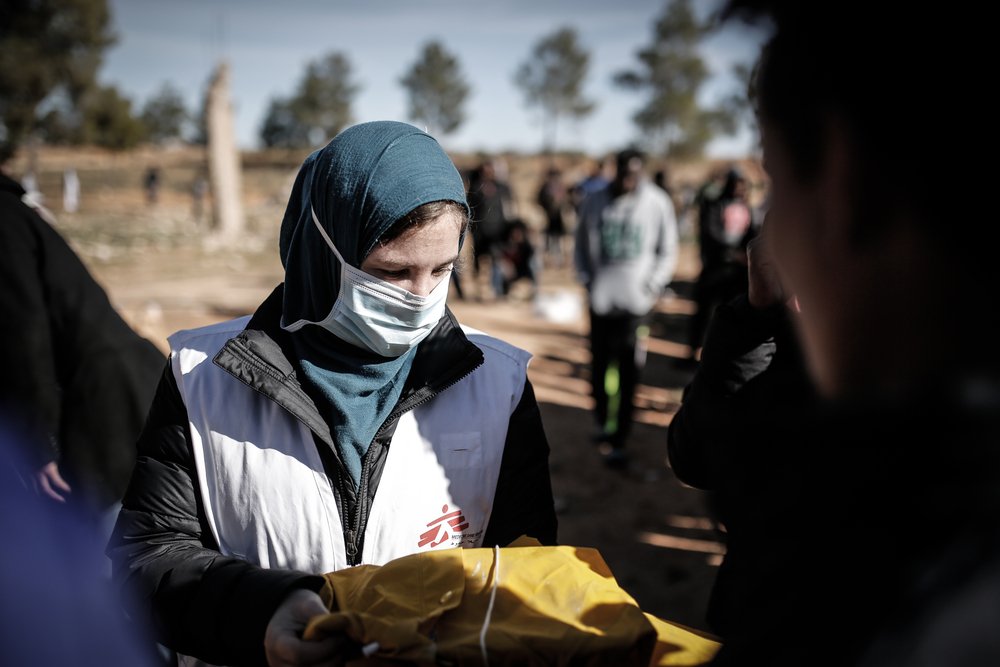 Our teams have reported severe cases of malnutrition in detention centres in Tripoli before. By giving out nutritional supplements, we hope we can avoid more.

“Please convince the guards to let me call my mother”

Detainees squat in long rows, their heels not touching the floor, their backs bent and their eyes looking down.

There are roughly 150 people in front of me, but they seem to occupy such a small space. 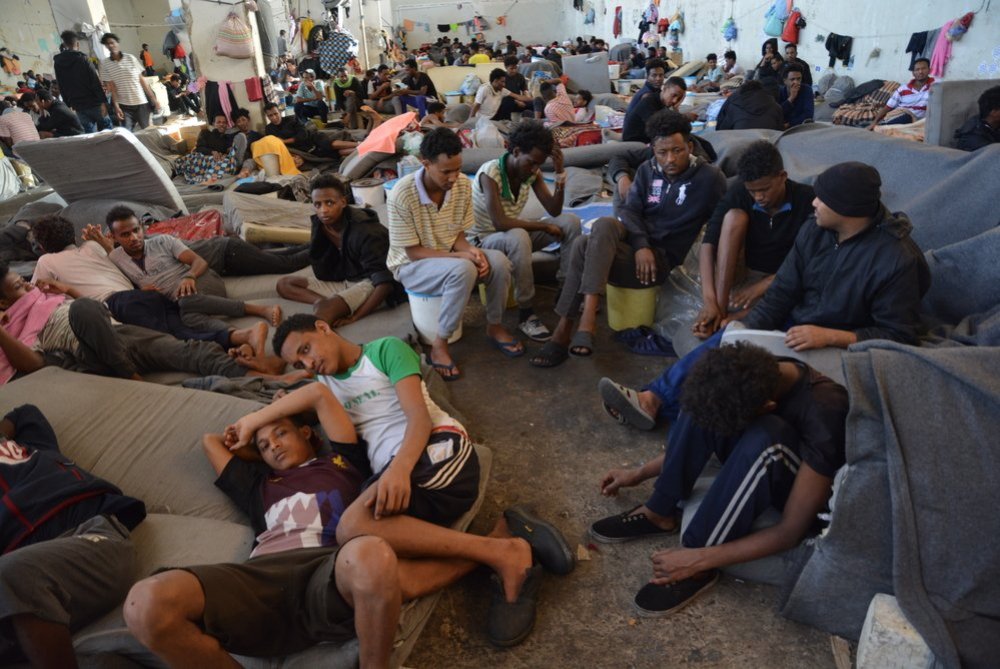 Jérôme Tubiana/MSF
Refugees in Zintan DC in the main warehouse where they were detained.

As I look at these people, I remember that someone once told me it is a very political gesture to look a migrant in the eye. It gives them back their humanity. In that moment, I think that she was right.

Many of the people I spoke to had lost all hope.

They felt like they were trapped in a loop, with no solutions, no choices and no options.

I met a group one day; they were survivors of a shipwreck. I spoke to a man who had lost his brother that night. “Please convince the guards to let me call my mother,” he said. “I am sure she thinks I am dead too; I need to let her know I survived.” 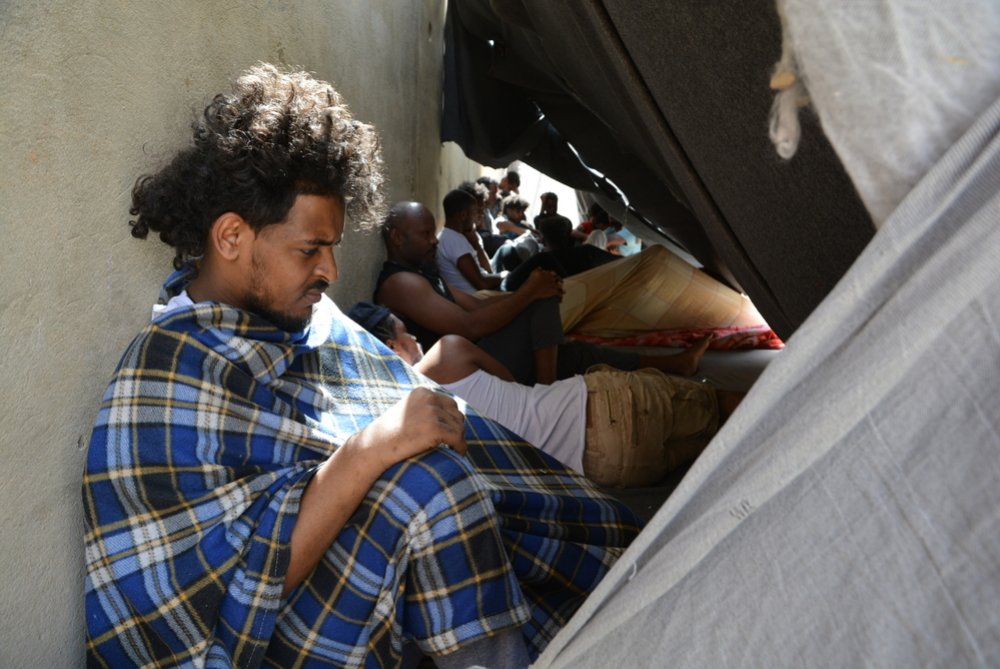 Jérôme Tubiana/MSF
Refugees outside in Zintan DC trying to protect themselves from the sun. They lean back on the walls of the buildings where detainees from the main hangar were moved to.

In the months I worked in Libya I found myself time and again pondering the same questions. What are people missing to really understand what is going on in Libya? Are those suffering so unfamiliar to us? Do we think that Libya is so far away that what happens here is not our concern? 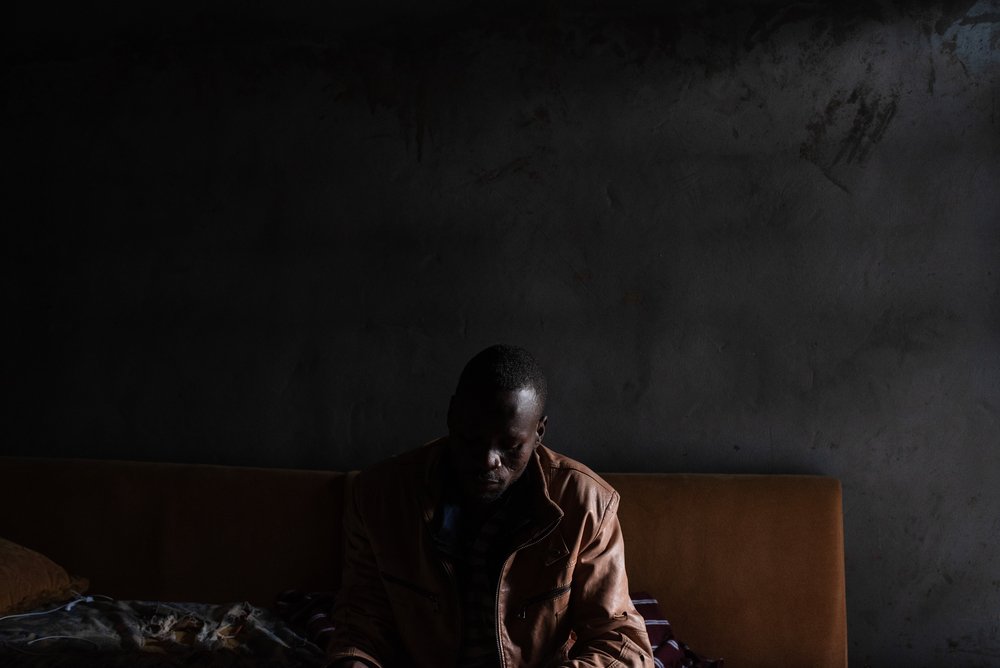 Giulio Piscitelli
Abdulbashir, 28-years-old from Mountain Marra in Darfur, Sudan. He says he arrived in Libya three years ago and spent almost two and half years in prisons for migrants.

For quite some time now I’ve heard that people are tired of hearing stories from Libya. They call it the ‘compassion fatigue’.

You will not find this fatigue in the MSF medical team who, every day, for years, go to the detention centres and out into the communities of Tripoli to try to ensure people receive care. 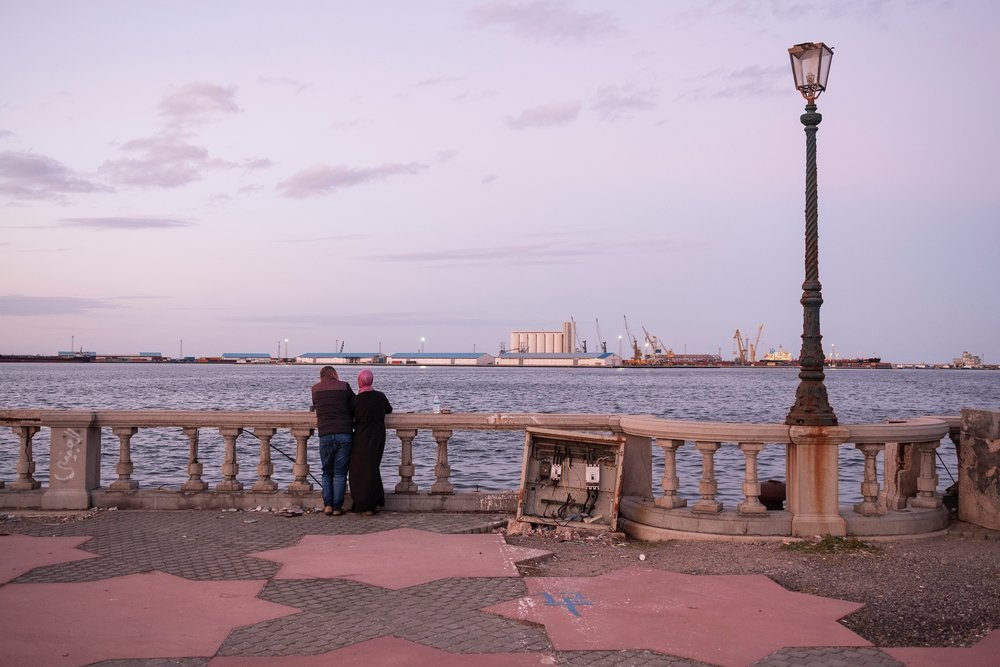 Every day they bear witness to the suffering of refugees and migrants caused by the lawlessness, the exploitation, the lack of protection and the limited access to the most basic healthcare.

During one of our toughest days in Tripoli, my colleague was very moved and could not hide her tears. She apologetically told me, “You never get used to it”. We should not.