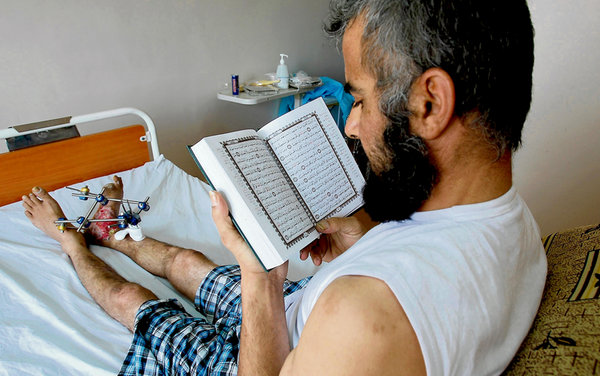 Lebanese hospitals strive to cope as funds dry up

Medics in Lebanon are struggling with the needs of wounded Syrian refugees, as Caelainn Hogan reports from Tripoli.

“I REMEMBER the day and the hour,” says Hasna (38), reliving the moment she lost not only her legs but her entire family. “It was 3pm on the last day of March, a Saturday.”

When her village of Abel, 3km from Homs, came under attack by the Syrian army, she and her family hid in a nearby school and then fled from town to town as the violence escalated.

On route to her husband’s hometown of Al Qaysar, a tank shell exploded near their motorcycle. Hasna’s two-year-old son Abdul Aziz and her 13-month-old daughter Tahleen were killed instantly. Her lower legs were barely attached to her body, but all she could think of was her children.

“Our children are dead,” she had said as her husband lay half-conscious beside her. He died in Homs before they were able to cross the border to Lebanon.

A Syrian flag is draped over the headrest of her bed at Dar al Chifae hospital in the Lebanese town of Tripoli. More than 30,000 Syrian refugees have fled to Lebanon, and local hospitals are overwhelmed with the influx of wounded.

Medics in Lebanon are struggling with the needs of wounded Syrian

Hasna sits with a worn copybook filled with songs she has written. “Dear mother, they killed me just because I want freedom,” she sings. “It’s just a simple word with a lot of meaning; hide this word in your heart – freedom, freedom, freedom. Tomorrow is a new day.”

Dar al Chifae, a subsidiary of the Islamic Medical Association, has an entire floor devoted to Syrian patients.

Abu Omar (22), arrived from Homs 10 days ago. A volunteer with the Free Syrian Army, he was injured when a tank shell exploded beside him in April, killing two others instantly. His legs were amputated below the knee in a makeshift field hospital.

When he came to Dar al Chifae four months later, his wounds were badly infected and doctors had to recut the bone. Now he waits for physiotherapy to prepare him for prosthetics.

Despite the escalating violence, he says he will return to Homs as soon as his treatment is complete. Looking down at the clump of bandages where his legs used to be, he laughs. “It can’t get any worse than this!”

The Lebanese government’s High Relief Committee (HRC) previously covered medical care for the wounded but has suspended its services since July 10th after the government cut funding. Over the last six months, 1,017 wounded Syrians have been treated in Lebanon at a cost of more than $7 million (€5.7 million), according to HRC secretary general Ibrahim Bashir.

Prime minister Najib Mikati confirmed yesterday the government would no longer fund services for Syrian refugees, but has given the HRC permission to appeal for donations from the international community.

“It is pending on the funds and approval of the Lebanese government,” says Bashir, who reports there are about 600 wounded people in Homs district who could soon cross into Lebanon in need of treatment.

“We can’t now measure the costs for the future. The situation inside Syria is becoming more and more critical, and no one can predict for how many months, how many years.”

While treating physical injuries is an immediate priority, Médecins Sans Frontières (MSF) is working to sensitise communities to the long-term psychological effects of trauma, a delayed emergency.

MSF is providing psychological and psychiatric services as well as regular awareness sessions to tackle the stigma surrounding mental health.

Over 30 women gathered in the small office of a local organisation in Tripoli, nodding eagerly as psychologist Lina Issa described symptoms arising after trauma. Few were brave enough to speak.

“Even in your own family, you would be treated as a crazy person,” said one woman.

Issa says she has encountered at least one person in every session who was tortured in Syria. Some children traumatised by their experiences suffer from “mutism” and bedwetting.

At the end of the session, a mother of three from Hama breaks down in tears, overwhelmed by the daily humiliation of surviving on food donations and being unable to pay the rent for the single, dilapidated room she and her family share.

Her son defected from the Syrian army 10 months ago and she has heard nothing of him since. Though many are afraid to seek treatment, some recognise the need. “We need this support 100 per cent,” said a young woman sitting in the front. “It is the first thing we are suffering.”