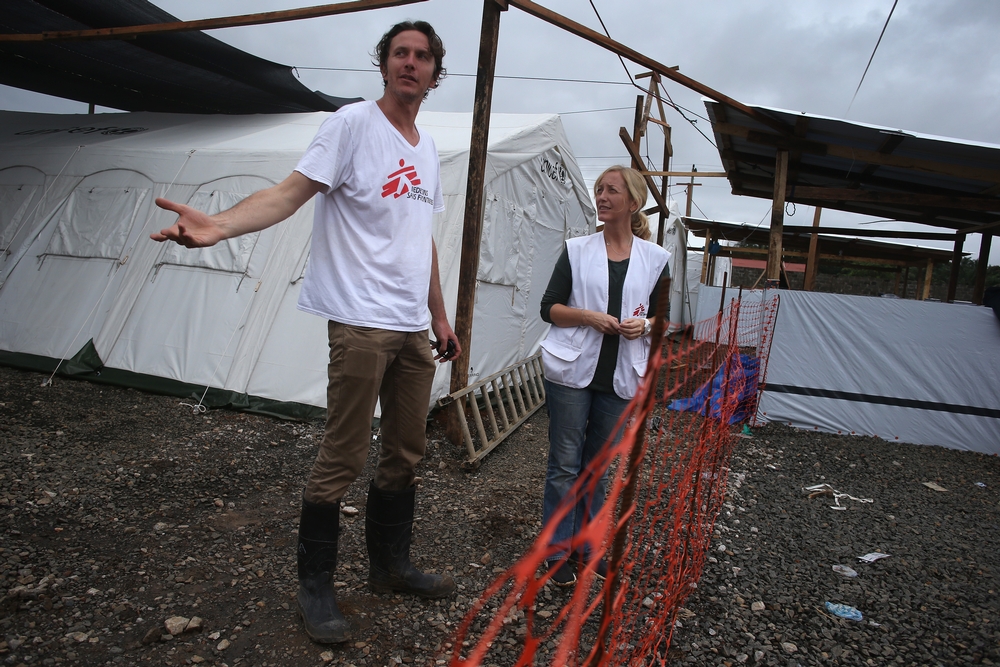 Médecins Sans Frontières/Doctors Without Borders (MSF) is rapidly scaling up its operations in Liberia as the international response to the Ebola outbreak in West Africa continues to be chaotic and entirely inadequate.

In its first week, MSF’s Ebola newest management centre – also known as ELWA3 – in the capital Monrovia, is already at capacity with 120 patients, and a further expansion is underway. Meanwhile, in the north of the country, patients continue to flow into the newly rehabilitated Ebola management centre in Foya.

“It is simply unacceptable that, five months after the declaration of this Ebola outbreak, serious discussions are only starting now about international leadership and coordination,” says Brice de le Vingne, MSF Director of Operations.

An emergency within the emergency

The outbreak is spreading rapidly in Monrovia, overwhelming the few medical facilities accepting Ebola patients. Much of the city’s medical system has shut down over fears of the virus among staff members and patients, leaving many people with no healthcare at all, generating an emergency within the emergency.

“In the aftermath of an earthquake it would be unthinkable that there are so few places where women can safely deliver their babies, or where people can be treated for life-threatening conditions,” says Lindis Hurum, MSF emergency coordinator in Monrovia.

“This is not only an Ebola outbreak – it is a humanitarian emergency, and it needs a full-scale humanitarian response.”

Ebola patients from every district of Monrovia

The number of people seeking care at the newly constructed 120-bed centre in Monrovia, which opened on 17 August, is growing faster than the team can handle, both in terms of the number of beds and the capacity of the staff. Patients are coming from nearly every district of the city. The staff is struggling to screen new arrivals, care for admitted patients, safely remove dead bodies and transport them to the crematorium.

“The numbers of patients we are seeing is unlike anything we’ve seen in previous outbreaks,” says Hurum. “Our guidelines were written for an Ebola centre with 20 beds, and now we are expanding beyond 120 beds.

The situation means we have to constantly adapt and we are recruiting and training health and hygiene staff day and night. The priorities now are maintaining a safe facility, separating suspected, probable and confirmed cases, and providing compassionate care.”

Like other Ebola centres, ELWA3 serves an important role in slowing the outbreak by isolating Ebola patients and preventing further infections. However, the unprecedented influx of patients is forcing MSF to reduce the level of care. It is not currently possible, for example, to administer intravenous treatments.

MSF is preparing for further construction and to erect three larger tents with space for 40 beds each.

In the very remote area of Foya, near the border with Guinea, the lack of assistance is compounding the emergency. MSF teams are working around the clock to contain the epidemic and the Ebola management centre currently has 67 patients.

“We have arrived into an extremely chaotic situation, and there are hardly any aid organisations to be seen,” says Hugues Robert, Emergency Manager for MSF.

“In some places around Foya, the Ministry of Health is experiencing shortages of protective equipment essential for the medical management of the disease. They also have limited capacity to safely bury bodies, and to provide ambulance services to refer patients.  They need support.

Aside from the provision of urgent medical care, we will also make it our priority to educate the community about the disease and how to prevent transmission.”

In Nigeria, MSF has also recently started providing technical support to the health authorities in their fight against the Ebola outbreak in the city of Lagos. MSF provides technical expertise in areas such as isolation, contact tracing, training and public education.  MSF's assistance is designed to last over a month and is exclusively advisory. At this point, Nigeria does not need MSF’s hands-on support. The six people team is supporting the isolation ward set up at the Infectious Disease Hospital (IDH), the referral centre for Ebola patients in Lagos.

MSF started its Ebola intervention in West Africa in March 2014 and is now present in Guinea, Liberia, Nigeria and Sierra Leone. The organisation runs five Ebola case management centres with a total capacity of 415 beds. Since March, MSF has admitted a total of 1,885 patients.   907 of these patients tested positive for Ebola, of whom 170 have recovered. MSF has deployed 184 international staff to the region and employs 1,800 nationally hired personnel.