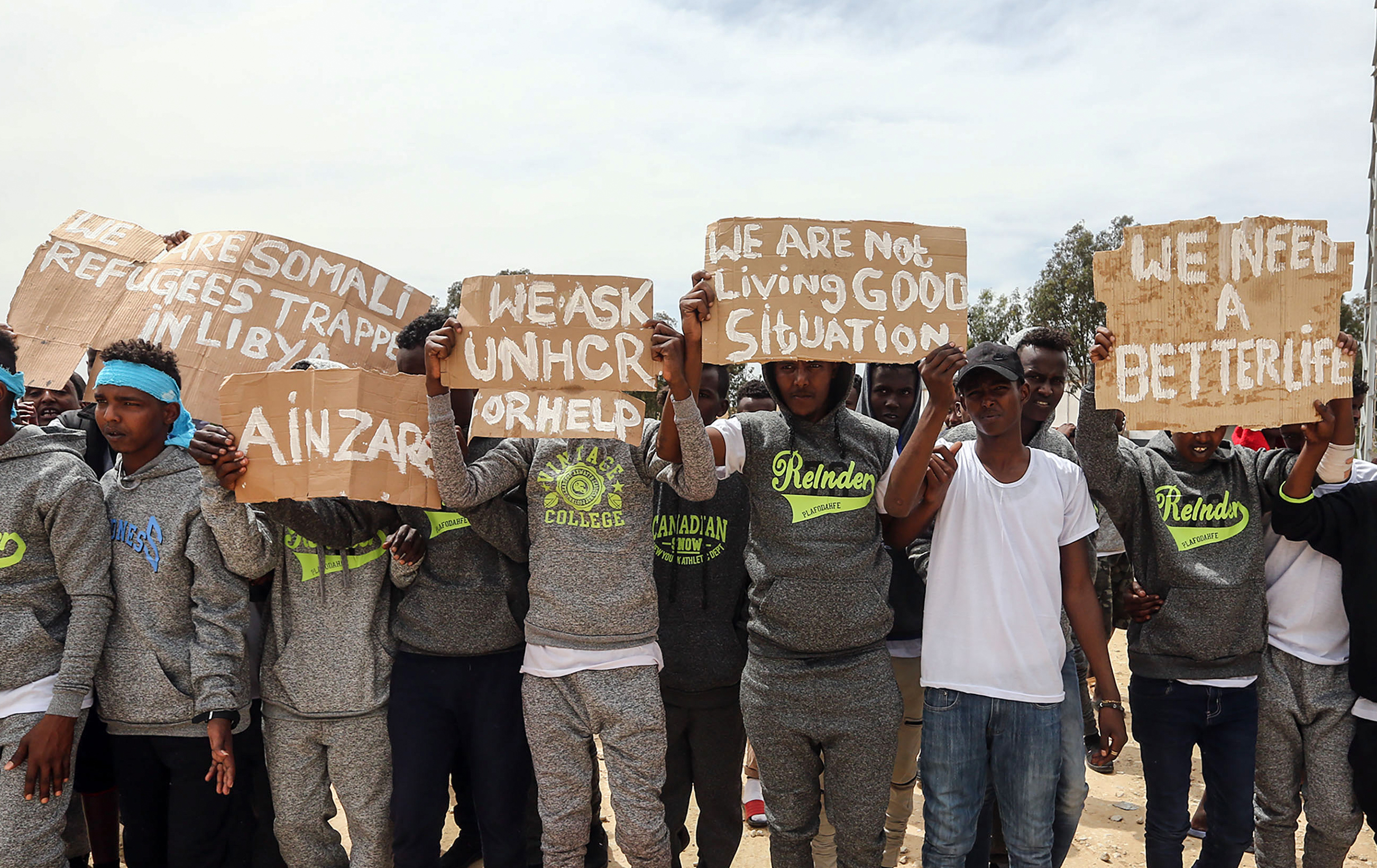 Médecins Sans Frontières (MSF) is extremely concerned for all civilians in Tripoli, as the worsening fighting forces thousands of Libyan families to flee their homes and seek shelter with family or in temporary shelters in schools or other buildings. For the more than three thousand refugees and migrants trapped in detention centres who are at risk of being caught in the crossfire, MSF is urgently calling for their immediate evacuation out of the country.

Civilian and medical infrastructure must be protected

As of April 16, a total of 1,005 casualties, including 189 dead and 816 wounded, have been reported by the World Health Organization (WHO). Health workers and services have been affected by the indiscriminate shelling and daily airstrikes, which have increased in more densely populated areas over the past several days. Since the start of the conflict, two doctors and one ambulance driver have been killed, with another doctor injured and nine ambulances damaged or destroyed, according to WHO.

All measures must be taken to protect civilians and civilian infrastructure, including by not carrying out indiscriminate attacks in highly populated areas. Medical personnel must be respected and protected in all circumstances.

Medical facilities both in and outside of Tripoli have reported limited capacity and less than two weeks of medical supplies remaining. Some civilians have been without water and electricity for several days.

Lack of food and water for detained people

For the over three thousand refugees and migrants currently trapped in detention centres in or near the conflict areas and who remain at imminent risk of being caught in the crossfire, the provision of basic services including food and water remains extremely limited – with reports of many not eating for several days at a time.

The fighting has had a further detrimental impact on the mental health of people in detention, with MSF teams observing a heightened sense of anxiety and fear among many patients, some of who have reported hearing gunfire and airstrikes close by while trapped in the detention centres.

MSF medical teams have remained on the ground since the start of the conflict, providing primary healthcare and emergency food, water and medical referral services for refugees and migrants in four detention centres across Tripoli. Teams have also delivered three-week supplies of tuberculosis and other essential medication to patients in detention centres to ensure treatments can continue amidst the ongoing conflict.

Over the past week, MSF teams provided medical consultations in the Anjila, Abu Salim, Sabaa and Tajoura detention centres, as well as two deliveries of potable water to Tajoura. While people from the community have been providing food to Tajoura detention centre, no permanent solution has been identified by the Libyan authorities, leaving MSF extremely concerned for the wellbeing of the over 600 people trapped inside. 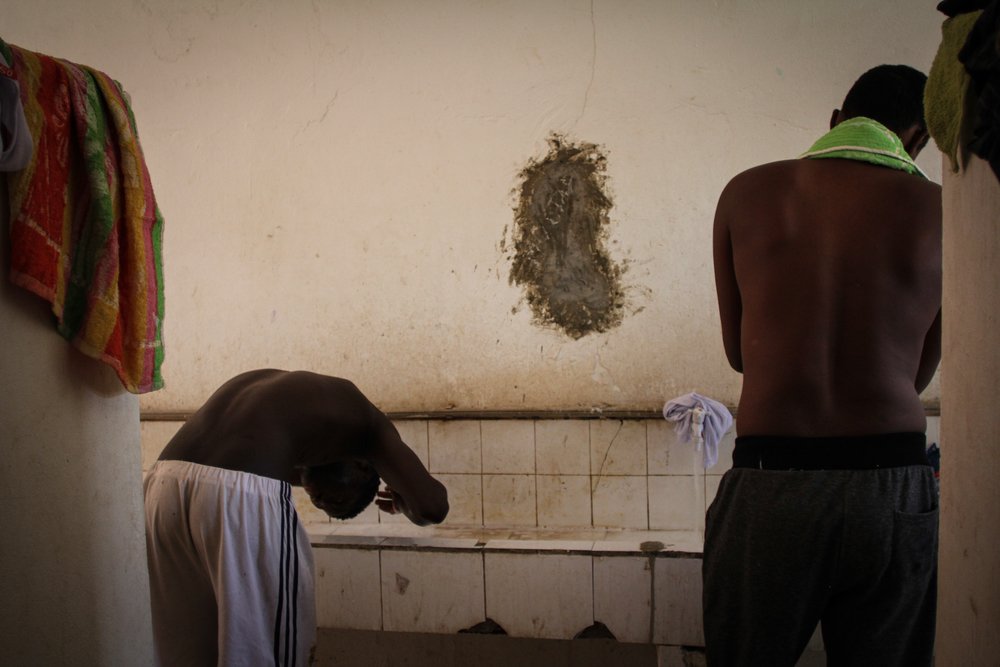 Sara Creta/MSF
Refugees washing up at the detention centre in Libya. File image from 2018.

In Sabaa detention centre, as well as providing medical consultations, MSF teams have distributed a much-needed five-day supply of food rations including fresh vegetables. Over recent days, approximately 200 people were moved from the Ain Zara detention centre, which is just 1.5km from the frontline, to Sabaa detention centre which is 6.5km from the frontline. With the new arrivals, the population size in Sabaa has surged to nearly 540 people, exacerbating already poor conditions and services. With a further 150 refugees relocated early last week to the United Nations High Commissioner for Refugees (UNHCR) Gathering and Departure Facility, Ain Zara detention centre is now believed to be empty.

While the numbers in each detention centres are subject to change daily, currently there are 135 people in Anjila detention centre which is 5.5km from the fighting. A few days ago there were around 910 people in Abu Salim, 6.5km from the fighting. This detention centre is anticipated to be the most likely to be directly affected by conflict in the coming days, with shelling of the Abu Salim neighbourhood during the night of the April 16. UNHCR is currently conducting a relocation exercise to move some of the most vulnerable people from Abu Salim to the Gathering and Departure Facility, but lacks the capacity to take everyone.

MSF medical teams have also provided hygiene kits in several shelters for displaced families that had to flee their homes, as well as a donation of war wounded kits (sutures, dressings and essential medication) to two hospitals so far, one in Tripoli and another south of the city.

Libya clearly not a place of safety for rescued migrants

The current fighting – the third spate in the past seven months – only further reveals the irrational attempts by European Governments in pretending that Libya is a place of safety.

One of the desperate options for Libyans and non-Libyans seeking to escape the fighting is the Mediterranean Sea. MSF is unable to verify if sea departures from Libya have increased since fighting began, however we do know is that seeking safety is not a crime, but a very real human response in the face of life threatening circumstances such as today's conflict. In the vacuum of any dedicated search and rescue response in the Central Mediterranean, people’s lives are significantly at risk at sea just as they are in Tripoli’s conflict areas.

Search and rescue capacity in the Central Mediterranean needs to be urgently increased, and anyone rescued at sea must be taken to a safe port as required by international law. This can only effectively happen if the European member states immediately agree on solutions to disembark survivors in safe ports, and put an end to punitive actions to curtail NGOs seeking to provide lifesaving humanitarian response at sea.

While we closely monitor the context, MSF activities are continuing outside of Tripoli, where our teams are providing assistance to over 800 people arbitrarily detained in Khoms, Zliten, and Misrata. MSF also continues to carry out medical consultations in Bani Walid.

We are concerned about a group of over 80 patients who were transferred about two months ago to a detention centre in Sirte as we can no longer follow-up and treat these people, many of whom have serious medical conditions. All medical referrals to Tripoli hospitals organized by MSF teams from Khoms, Zliten, Misrata, Bani Walid or Sirte are no longer possible due to the current conflict.