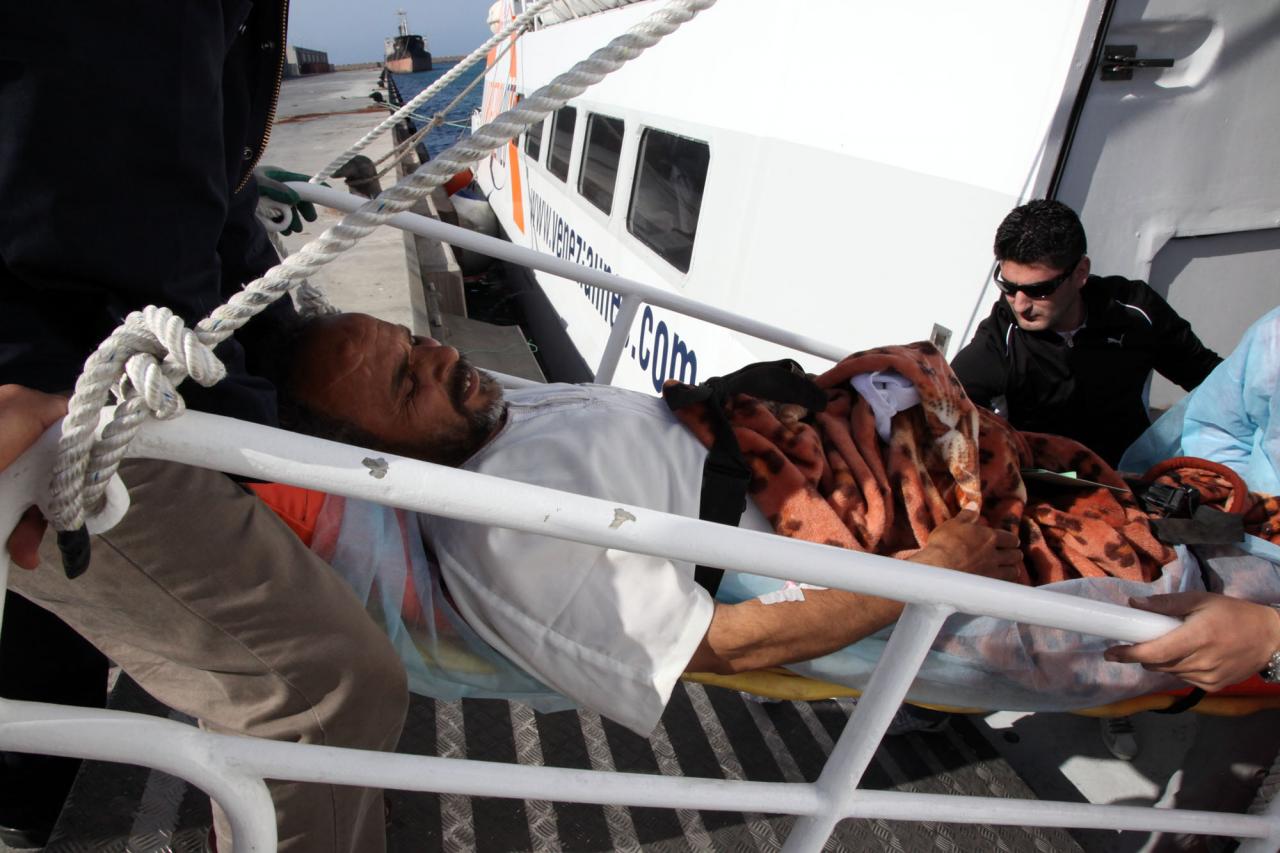 Zaris, Tunisia/Dublin, April 16, 2011 – Médecins Sans Frontières/Doctors Without Borders (MSF) today completed a medical evacuation of almost 100 people by boat from Misrata, Libya to Tunisia. The majority of the patients had suffered war-related injuries.

The boat departed Misrata on 15th April, arriving in Zarzis, Tunisia, early this morning, with 64 war-wounded patients and 45 other people. While in Misrata yesterday, the MSF team was able to assess medical facilities in the city, where ongoing fighting has cut off the population from external assistance and hospitals and clinics are overwhelmed with casualties.

The evacuation followed a similar one on 4th April, when 71 people were transferred from Misrata.

“For weeks now, health structures have been struggling to cope with the influx of patients,” said Dr. Morten Rostrup, an MSF doctor who participated in the med-evac operation. “They have been lacking medical equipment and personnel to treat the wounded and the sick suffering from chronic diseases.

"With the latest heavy bombardments in Misrata, the situation is worsening as hospitals have to discharge patients before their treatment is completed in order to treat those wounded by fighting. Many of the injured cannot even access medical facilities without further risking their life.”

The MSF team also assessed the situation in a camp near Misrata’s port, where thousands of migrants have taken refuge and are awaiting repatriation.

“What we have seen is that these people live in extremely difficult conditions, lacking proper shelter and food,” said Dr. Rostrup. “They are desperate to go back to their home countries.”

The MSF team on the boat included seven doctors, six nurses, and one psychologist, among them nine Tunisian volunteers, providing emergency medical care to the 64 wounded patients.

Among the injured, ten people were in critical condition, three were on mechanical ventilation, and one patient was suffering from anemia, requiring blood transfusions.

The boat docked in the port of Zarzis early this morning. Tunisian health authorities and the Red Crescent are organising the transfer of the patients to Sfax a city of many where there are several hospitals and clinics.

The medical evacuation from Misrata was carried out independently from all the parties involved in the conflict, in accordance with MSF’s principles of neutrality and impartiality. While conflict persists inside Libya, MSF is scaling up its assistance to people affected by the violence, regardless of their affiliation or origin, and independently of any political considerations.

MSF reiterates its call on all belligerents to allow unhindered access to medical assistance for all Libyans affected by the violence. MSF also calls for the respect of medical facilities, healthcare personnel, and vehicles transporting patients.
MSF in Libya and Tunisia

From the onset of violence in Libya, MSF’s priority has been to access areas with the largest needs. During a first medical evacuation by boat on 3rd April, MSF evacuated 71 patients from Misrata.

Six tons of emergency medical materials were donated to the Libyan medical committee in order to help health facilities cope with the influx of patients.

On 21st March, MSF sent a first shipment of surgical kits for 300 wounded to the hospital in Misrata, where large numbers of injured persons and severe shortages of medicine had been reported.

In the eastern city of Benghazi, MSF teams continue to work with the medical committee and to provide support wherever needed, including technical support to the Benghazi central pharmacy in Al Jalaa Hospital, the main trauma hospital and referral facility for eastern Libya, MSF medical teams are supporting hospital staff with nursing care organization.

MSF continues to send medical supplies to Libya, dispatched to areas where ongoing fighting has created the most needs. Since 24th February, 44 tons of medicine and medical materials, including treatment for burns, have arrived in Benghazi.

In Ras Ajdir, Tunisia, at the border with Libya, MSF teams have been providing psychological support to people fleeing the conflict. They are also working in the transit camp at Choucha, where people are awaiting repatriation or resettlement.