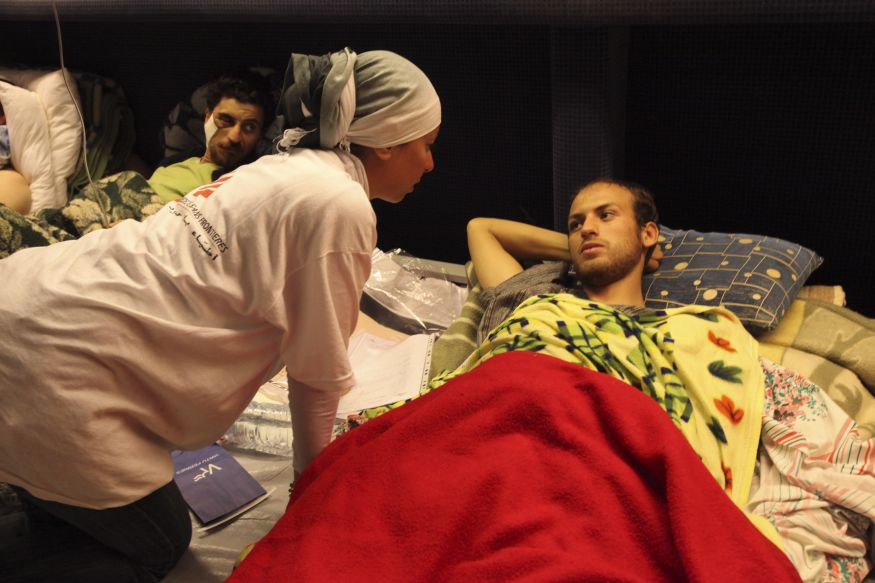 Libya: Providing medical and surgical treatment to the wounded in Misrata

As the bombings continue, MSF teams are ramping up their medical activities and performing surgeries in the northern part of the besieged city of Misrata.

For the past two months, government forces and insurgents have been battling over the city of Misrata. The city is still targeted by bombs, and insecurity prevents the people from seeking out and receiving medical care. There are not enough specialist health professionals, not enough safe facilities where pregnant women can give birth, and not enough hospital beds for the injured. The MSF team of 22 staff is providing medical and surgical treatment to the wounded in two hospitals (Abbad and Kasr Ahmed) and in the Ras Thuba clinic.

Lack of staff
Access to medical care has become more restricted because a large number of medical facilities have been destroyed or are located too close to the front lines. In the few medical structures that are still running, there are not enough health staff such as orthopaedic surgeons, to provide post-operative care.

“The Libyan medical staff who have been working around the clock for the past seven weeks are exhausted,” explained Mego Terzian, head of emergency operations for MSF. “Moreover, the few medical structures that are still operational have no nurses, because most of them were foreigners who have now left the hospitals.”

On April 28, a nine-person MSF team – two surgeons, two anaesthetists, three nurses, one doctor and one logistician – arrived to lend support to the three-person team that has been in Misrata for 10 days assessing needs.

Surgical support and restoring the health facilities
A surgical team is providing support to the Abbad hospital in the northern part of the city. Over the past 48 hours, 10 critical surgeries have been performed. MSF is also working in the Kasr Ahmed hospital, located in the eastern part of the city. Some 300,000 people have come to the area seeking refuge from the fighting that has been raging in the western part of the city. In Kasr Ahmed, the team is restoring the operating room and increasing the structure’s current intake capacity from 12 beds to 50 beds. The few health structures that are still operating have a critical lack of beds, and there are only about 100 beds for the entire city.

“Because they are afraid that they will not be able to handle a major influx of wounded and because of the lack of human resources, Libyan doctors are forced to send patients back home after two days, even when their conditions have not been completely stabilised,” adds Terzian.

MSF also has a presence at the Ras Thuba clinic, where it is caring for women in labour and performing caesarean.  To meet the demand, the MSF teams plan to increase the operating room capacity to around 60 beds. An MSF psychologist is also providing mental health treatment to Libyan medical personnel who, since the conflict began, have been working in harsh conditions and have been exposed to unrelenting stress.

Supplies low
In Misrata, water has been in increasingly short supply, with frequent outages and virtually non-stop bombings. In response to the lack of drugs, especially anaesthetics, and the lack of medical equipment, such as masks and respiratory filters, MSF has already sent over 25 tonnes of medical equipment and medications.

MSF Activities in Zintan
In Zintan, a town located 140 kilometres south west of the capital Tripoli, an MSF team has been working with the hospital’s staff since April 30. In recent days, 30 injured have been taken into the hospital, where MSF has been assisting the emergency department, triaging patients and training medical staff. In Tunisia, at the border with Libya, MSF teams have been providing psychological support to people fleeing the conflict. They are also working in transit and refugee camp, where people are awaiting repatriation or resettlement. MSF has also deployed mobile clinics along the Tunisian border, between Dehiba and Ras Ajdir, focussing on medical and psychological activities.

Present since April 18, MSF is currently the only independent international medical organisation working in Misrata, Libya's third city with a population of 450,00-500,000 people.  During the first half of April, MSF carried out two medical evacuations by boat from Misrata, referring around one hundred wounded patients to further treatment in Tunisia.